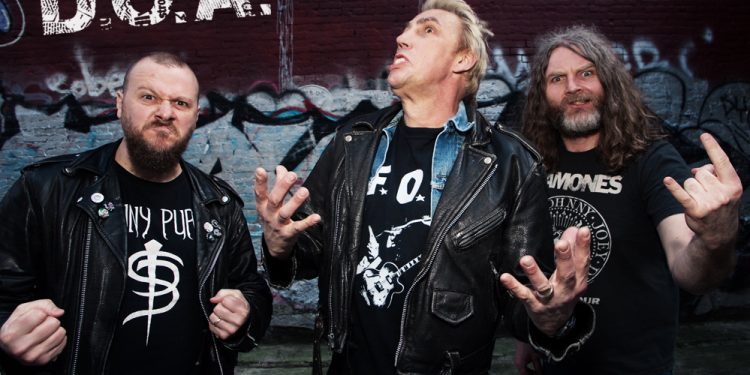 “Yes, “Fucked Up Ronnie and “Fucked Up Donald” are one and the same. It’s a new recording and new lyrics,” explained lead singer Joe Keithley.

Do conservative politicians like Ronald Reagan and Donald Trump bring out the best in punk rock?

“In some sense, sure, Conservative politics bring out the best in punk rock. That doesn’t mean people shouldn’t be outspoken and vigilant against abuses of democracy, when we have other types of politicians running things. But people like Thatcher, Reagan, Trump, Erdogan in Turkey, the Presidents of Poland and Hungry are all fascist or working their way there,” Joe Keithley noted.

The album cover displays Donald Trump holding a gun. While running for President Trump said, “I could shoot somebody and I wouldn’t lose voters”. The album cover is not an allusion to that, but a famous DOA skull and gun symbol.

“There is a real famous DOA symbol where Trump’s face is the skull, but aiming the gun the same way. We thought we’d be funny, but there is a point to it. The intent is there – that he’s not that good for you. He’s kind of holding a gun to your head in a sense,” Joe Keithley reasoned.

In addition to being the lead singer of D.O.A., Joe Keithley also runs the record label Sudden Death Records.

“We did mostly singles in the early days. In 1978, when D.O.A. first started with the “Disco Sucks” single, and then we did the “Prisoner 13″ 7” single on vinyl, “World War Three”, and there is a few others. Twenty years later I started Sudden Death Records in earnest in 1998. On Suddendeath.com there is about 110 releases we put out over the last twenty years or so,” Joe Keithley said.

Next year is the 40th anniversary of D.O.A. and the band has lots of plans to commemorate this milestone including a new album, world tour, and documentary.

“There are lots of plans for the 40th anniversary. In January and February we’re starting recording on a new album, then we’ll do a world tour, which will take us around everywhere through 2018 to 2019. We’re going to shoot a 40th anniversary documentary. We’ve started that. We’re going to China in three weeks, and that will be a part of the documentary,” Joe Keithley replied.

The rise of fascism is a topic that D.O.A. will likely explore on the new album.

“Things are changing so quickly, we’re just starting on the songs now, so it would be premature to announce what. There is some really obvious stuff we’ll probably address like the rise of white fascism. There are people losing their rights, and in some cases they didn’t have too many in the first place. Some people who are power mongers are dedicated to taking those away. Other places we have thriving democracies that are being destroyed. Turkey is a good example of that for sure. In the United States, fortunately with a guy like Trump there is a system with some checks and balances. That’s one area we’ll probably talk about. There is going to be some fun stuff on the record too. D.O.A. is a mix of politics and humour, along with superb drums and guitars,” Joe Keithley said.

Joe Keithley, who is the author of “I Shithead: A Life In Punk” and “Talk – Action = 0”, is also planning to pen a third book set to be released next year.

“I will write my third book, and that will be out sometime during the 40th anniversary. It’s going to be more about D.O.A. and politics and world events. It has some serious stuff in it and funny stuff in it as well,” Joe Keithley added.

D.O.A. has a rich history playing shows or touring with bands like The Clash, Ramones, Dead Kennedy’s, Black Flag, Nirvana, Minor Threat and many others.

In 1979, D.O.A. opened for The Clash at the Pacific Coliseum in Vancouver, British Columbia.

“When we played with The Clash in Vancouver there were probably 2000 to 2500 people there. That was a big show for a punk rock show in those days for sure. They’re great, I saw them about four times with the original line-up. It was a great experience,” Joe Keithley reminisced.

In addition to touring with the Dead Kennedy’s, D.O.A. also did a collaboration with Jello Biafra, and had their music released on Alternative Tentacles.

“Jello Biafra, he’s a good buddy of mine. We’ve done some records together like “Last Scream of the Missing Neighbors”. We helped out with a track on his Jello Biafra and the Guantanamo School of Medicine album EP. On the b-side there is a version of “We Occupy”. That was six, seven years ago. Jello Biafra does guest vocals on that and sings the song. It’s also on a single that D.O.A. put out about seven years ago. If we can find a way to work together on a recording, then we do. He’s a good buddy, and he’s a real talent,” Joe Keithley replied.

Jello Biafra and Joe Keithley both have a few more things in common: Both appeared in Bruce MacDonald films, and both ran for politics. Although, Joe Keithley’s political aspirations are much more serious.

“I would call my run in politics more serious than Jello Biafra’s. I ran for the Green Party four times. The last time I ran, I managed to triple the amount of Green votes in the riding, so I did pretty well. We won three seats, not myself personally, but the Green Party won three seats in the BC legislature. With the help of the NDP we managed to topple the right-wing government here, which is great. They had been in power way too long. I’m really happy with the effort the Green Party came up with,” Joe Keithley recounted.

In the 2017 election Joe Keithly finished in third place with over 3000 votes. Why the Green Party?

“A couple things, first I think the Green Party is the most open minded. It cares about the environment the most of all the parties. Going towards the future, I think we have the most innovative approach towards creating new jobs and keeping people employed. We’re dedicated to making a more sustainable world for everybody, much more so than the other parties. Obviously the NDP have some merits, there are some good people involved there. I would say this also, no party is perfect. The BC Green Party, we’re not perfect, but we’re putting in a good effort, and making a difference,” Joe Keithley surmised.

D.O.A. are looking forward to playing the Nation’s Capital once again.

“We’re excited to get back to Ottawa. We haven’t played there in about 3-4 years, so I think it’s going to be great. It’s always one of the best places in Canada for D.O.A. People will see a crazy, wild live show. That’s what we aim to do, and that’s what we do every time we hit the stage,” Joe Keithley concluded.

The concert on Friday, October 20th takes place at The 27 Club located on 27 York Street in Ottawa’s Byward Market. The show is 19+, doors open at 8pm, and advance tickets are $16 + service charges. Tickets are available as of Friday at Vertigo Records, both Compact Music Inc. locations and at Spectrasonic. For more information about this concert visit the Facebook Event page.