Interview with No Use For A Name drummer Rory Koff 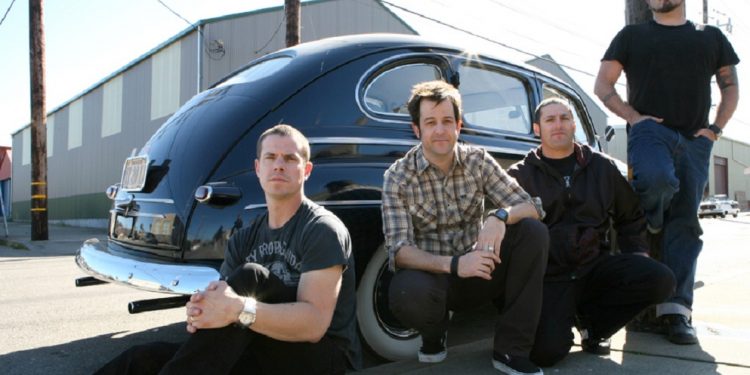 San Jose, California – Fat Wreck Chords released a collection of rare No Use For A Name recordings, all songs the band had covered. The new album, titled “Rarities Volume 1: The Covers”, came out on August 11th.

The covers range from Kiss, to the Misfits, to Depeche Mode, and Cheap Trick.

“It was Fat Wreck Chords idea, because most of these songs where sitting unheard, and unused. I think it is a really fun release for fans and people that maybe never listened to the band. Some of the high points for me are: “Enjoy the Silence”, “Dream Police”, and “Fairytale of New York”. Some of these songs were recorded in the 90’s with Chris Shiflett, so they are old,” drummer and original band member Rory Koff explained.

Chris Shiflett, who became the lead guitarist of the Foo Fighters in 1999, had previously played in No Use For A Name and Me First and the Gimme Gimmes.

Over the years No Use For A Name has covered a lot of bands, but according to Rory Koff, the band that they enjoyed covering the most was the Misfits.

“Myself and the band loved to cover the Misfits mostly. We could pretty much play any song live only because Tony somehow knew all the lyrics. There songs were easy, fast, catchy, fun, and everyone always knew every song,” Rory Koff recalled.

“The 5 year period of Tony’s passing did not alter my thoughts at all. I think about him all the time and miss him. People ask me about him, the band and music, and certain things we did throughout the 27 years as a band all the time. I don’t do too much social media regarding the band, but do read the messages and videos related to the band. I’m always taken back by how much Tony’s lyrics and melodies, how the music and the band, effected people,” Rory Koff disclosed.

When Tony Sly passed in 2012 at the age of 41, the punk rock world was in a state of shock. Five years later there is still an outpouring of love and support from fans.

“I never expected the outpouring of thoughts, love, support, and understanding, mainly because it was not supported to go down the way it did with the loss of Tony. It is still a little surprising at times, but I understand why we get the response because we toured all over the world, did 8 studio albums and the band was “typically” really good,” Rory Koff noted.

The recent passing of both Chris Cornell and Chester Bennington really struck a nerve for Rory Koff.

“Recently, for whatever reason the passing of Chris Cornell and Chester Bennington really struck a nerve with me. The loss of them brought up a lot of thoughts of losing a friend, band leader, great song writer, creative mind, father, husband, and nice thoughtful guy, and it bummed me out. I wish it could have been different, but it is what it is. Such a great loss for many people around them: family, friends, band mates, and fans. It is really too bad to lose a person like Tony, Chis, or Chester. When Tony passed all the emotions, coulda’s, shoulda’s, not supposed to happen, and why it happened hit myself and everyone around him very hard. They were all different causes of passing but all major losses the same,” Rory Koff lamented.

Over the decades Fat Wreck Chords has been supportive of No Use For A Name, and their support means a lot to Rory Koff.

“Fat Wreck Chords has always been supportive though all the endeavors the band did over the years. They have also been very understanding of the situation after the loss of Tony. They are friends, and a great record label. They have created opportunities over the years and always check in regarding anything that comes up with the band,” Rory Koff added.

After Tony Sly passed away, the Fat Wrecks Chords family got together and released a tribute album titled “The Songs of Tony Sly”. There were No Use For A Name covers from many bands including Nofx, Bad Religion, and Rise Against.

The Tony Sly Tribute Album is a bit much to listen too because all the versions are so good and played with emotion, respect, sorrow, and love for Tony. All the bands recorded and choose those songs for the same reasons, gave their time, and paid the highest respect a band can do for a friend. The songs that stuck out to me were versions by Karina Denike, NOFX, Snuff, Anti Flag, and Alkaline Trio,” Rory Koff replied.

In retrospect Rory Koff’s favourite album was the last one they recorded with Tony Sly at the Blasting Room.

“Probably my personal favorite album was the last titled ‘Feel Good Record Of The Year’. The band worked very hard to put this one together, but it actually came together very easily. The band was really at the top of its game, great songs, and we got to record at the Blasting Room with Bill Stevenson and Jason Livermore. What an excellent experience to record there! It was also the last recording No Use For A Name was able to do, and represents the band perfectly,” Rory Koff reflected.

The album peaked at #19 on the Billboard Heatseekers.

After the passing of Tony Sly, No Use For A Name broke up. However, ‘No Use And Friends’ played a few shows, most recently in 2016. Will there be more shows in the future? Only time will tell.

“No Use and Friends has only been done 3 times and all experiences were amazing. Most guest singers nailed it perfectly, and if they didn’t, Matt Riddle was there to help them out. We decided to do it with the support of Erin, Fat Mike, and Chad at Fat Wreck Chords in Montreal and San Francisco. The other performance was put forward by David Pollock form Destiny Tour Booking (long time No Use For A Name European booking agent and friend of the band) in Belgium. We would love to do it again under the right circumstances. We get offers all the time, but want to do it for all the right reasons, timing needs to work out, and make it fun with the right singer(s),” Rory Koff noted.

“I always have something going band wise. Currently playing in a country band called ‘Everyday Outlaw’. And a great band I played with years ago called the Boneshavers, which I did a few albums with in the early 90s. Happy to still be playing, and gig a few times a month,” Rory Koff said.

To purchase the new No Use For A Name album “Rarities Volume 1: The Covers”, check out the Fat Wreck Chords store online.

Tags: Fat Wreck ChordsMusicNo Use For A NamePunk
Next Post