Interview with The Trews headlining Hopped and Confused 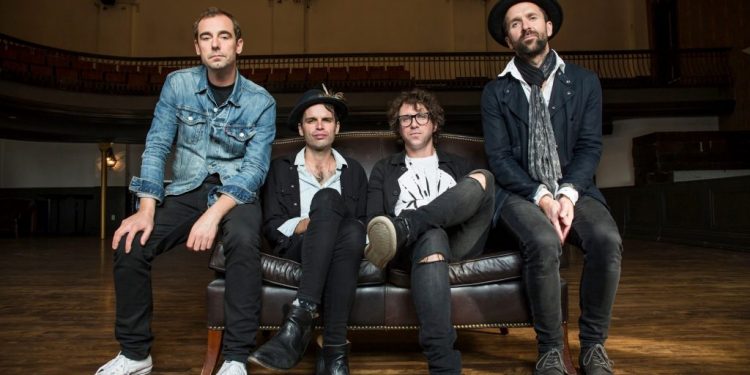 Ottawa Ontario – The Trews return to Ottawa on Friday, August 25th to headline the opening night of Hopped and Confused. The event combines the best of Mill Street’s craft beer and the best of Canadian music all in one exciting two-day event.

“The honest answer is “contractual obligation”… it was part of our record contract that after so many releases they would put one out. We were a little resistant to the idea at first cause we didn’t want to send a signal that we were packing it in or anything but once we embraced it as a new project and started doing new tracks and digging out old ones it got kinda fun”, guitarist John-Angus MacDonald replied.

In addition to all the hits, the album “Time Capsule” also features four new songs.

Are The Trews working on a new album? Yes, fans can expect a new album in 2018!

“We’ve written hundreds of songs since our last full length album back in 2014. Some of those showed up on Time Capsule. We’re pretty happy with where things are at creatively and have been debuting new material all summer at our shows. The plan is to record in the fall and release early next year”, John-Angus MacDonald responded.

The Trews have had many hit songs over the past 20 years including the Juno nominated song “Not Ready to Go”. What was the inspiration behind the song, and did you and your band mates have a sense of how big this song was going to be before its release?

“We had no idea it would be a big hit. In fact, when we hit the road for that album, before it was released as a single, we rarely played it. It was just one of our riffs that we played in the jam space and made up a simple song to. I don’t like to think of the eventual result of a song while writing it, I think it stifles creativity and takes away the organic nature of the process”, John-Angus MacDonald explained.

Another hit song by The Trews was “Hold Me in Your Arms” which premiered at the 2007 Grey Cup pre-game show and went #1 on Much Music.

“It was cool. Much Music meant so much in those days and having your video on 10 times a day certainly didn’t hurt!”, John-Angus MacDonald stated.

Talking about The Grey Cup, The Trews also performed “O Canada” at the 2010 Grey Cup. That outdoor performance brings back a lot of chilling memories for John-Angus.

“My memory of doing the anthem at Grey Cup in front of a stadium of people, and millions on TV, is freezing my butt off! It was so cold that touching my steel guitar strings actually hurt!”, John-Angus MacDonald reminisced.

John-Angus MacDonald and Colin MacDonald seemed destined to become professional musicians growing up. The brothers grew up in a musical household.

“There was always an acoustic guitar and an upright piano in the house, and a massive vinyl record collection. My dad played so music was always a massive part of my growing up. The first electric guitar that my dad brought home was a cheap Washburn when I was about 12 years old. Even on cheap and shitty gear, hearing an electric guitar through an amp for the first time was a revelation! My brother Colin learned the opening riff from Enter Sandman and showed it to me – I couldn’t believe that it sounded just like the record (in my mind, anyway)”, John-Angus MacDonald recalled.

“The first guitar that I ever bought for my self was an Epiphone Casino at the now defunct Jack Lilly music in downtown Antigonish NS. I bought it cause that’s what the Beatles played”, John-Angus MacDonald added.

How have The Trews changed and evolved since your debut album?

“In a million inconceivable ways and not at all! Life happens – marriages happen, marriages fall apart, kids happen, bad habits develop, band members come and go, the business changes(drastically), you get better in some ways and worse in others but all the while we are (mostly) the same people committed to this band and writing songs and playing music together”, John-Angus MacDonald stated.

The Trews are looking forward to returning to the Nation’s Capital. They are also happy to be seeing their old label mates Yukon Blonde at Hopped and Confused.

“Yukon Blonde were label mates of ours at Bumstead for about 5 minutes so I look forward to seeing them live again, they have some cool songs. To our fans in Ottawa, can’t wait to see you again, it’s been far too long! Let’s get hopped and confused”, John-Angus MacDonald concluded.

Mill Street Brewery and Dine Alone Records present the second annual Hopped and Confused, a special two night event at the Mill St. Brew Pub Ottawa (555 Wellington St) on Friday, August 25th and Saturday, August 26th! The event will pair Mill Street’s renowned collection of craft beers with an all Canadian line up of bands curated by Dine Alone in honour of Canada’s 150.

Tickets are on sale now. General admission tickets for each night are $35, VIP tickets (which include a tour of the brewery and a beer tasting with some of the performers) are $65, and two day passes (only 100 available) are $60. They are available for purchase here: universe.com/HC2017