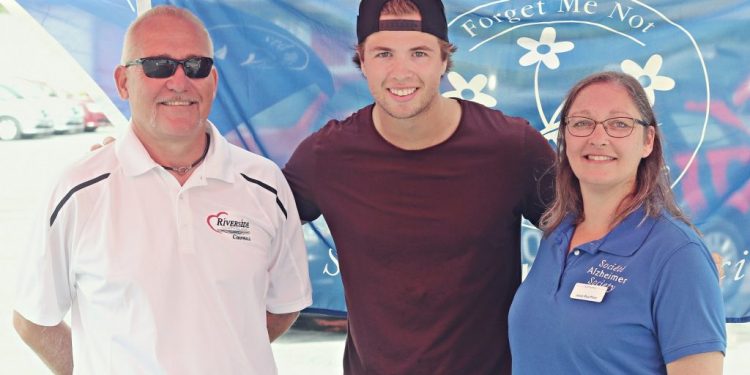 Cornwall Ontario – Alzheimer’s or other forms of dementia impact the lives of over 747,000 Canadians including two relatives of Vancouver Canucks defenseman Ben Hutton.

NHL hockey player Ben Hutton was signing autographs at a fundraiser for the Alzheimer Society on Thursday, August 10th at Riverside Auto on Vincent Massey. The Cornwall Nationals also participated in this event with a shoot-out drill.

“This fundraiser is close to my heart. In my family, my grandma has Alzheimer’s disease, and my aunt was just diagnosed with it as well. I’m glad I can give back a little bit,” Ben Hutton said.

This is not Ben Hutton’s first visit to Cornwall. He played against the Cornwall Colts as a member of the Kemptville 73’s and the Nepean Raiders of the CCHL.

“Usually the drives to Cornwall were facing the Spink brothers. The Cornwall Colts were always a good team when I was playing. It definitely brings back some good memories,” Ben Hutton recalled.

One of Ben Hutton’s best memories happened in 2012 while fishing. He started getting texts and phone calls that he had been drafted by the Vancouver Canucks.

“I was actually out fishing. I got the call saying I was drafted. At first I thought it was a joke, but then there was a couple more texts, and a couple of calls. The Vancouver organization told me I was on a plane in two days, get ready for camp, and that is when it kind of sunk in. I was like, holy crap, this is real. It was a surreal day, I will remember it for the rest of my life,” Ben Hutton reminisced.

Ben Hutton, who played NCAA Division I for the Main Black Bears, is still working on completing his degree.

“I studied business management. I’m currently still trying to get my degree. I’m taking one class at a time throughout the summer, and during the season I try to chip away, so hopefully soon enough I’ll get my degree,” Ben Hutton explained.

In 2011, Ben Hutton represented Canada at the World Junior A Challenge and helped the team win silver. In 2016, Ben Hutton helped Canada win gold at the IIHF World Championship that took place in Moscow.

“That was an unbelievable moment. We were over in Russia, and my dad was actually able to come as well, so that was a cool bonding moment for me as well with my dad. Having a gold medal around your neck at the end of the tournament was just unbelievable,” Ben Hutton responded.

In his rookie season Ben Hutton had 1 goal, 24 assists, and 25 points in 75 games with Vancouver. His first NHL goal is one that he’ll never forget.

“It took me a little while to score my first NHL goal, I remember that. Daniel Sedin made a great play down low and found me backdoor. There wasn’t much to do. He kind of did it all. I just had to put the puck in the net, I pulled the trigger and it went in,” Ben Hutton remembered.

Henrik Sedin and Daniel Sedin are great players on and off the ice. They have done a lot to help young players like Ben Hutton feel welcomed.

“The Sedin’s are great NHL veterans, and they’re not only great on the ice, but off the ice too. Every new face that comes in, they take their time to meet them and get to know them, and make them feel comfortable. Which I think is huge for team chemistry. Make people feel comfortable in the locker room, so they feel comfortable on the ice,” Ben Hutton noted.

“It was a shock. When they called my name, I was kind of caught off guard. It was right before a game too. I was in the zone trying to get focused for the game, and they called me. Is this an error? But no, it wasn’t. It was a great privilege, and hopefully I can build on it and become a better defenseman over the years,” Ben Hutton said.

What do the Vancouver Canucks need to do to make the playoffs next year?

“We need to score more goals. We struggled scoring this past season. We brought in a couple of new guys. We’re a younger team, and hopefully we can win a few more games, and be in the playoffs,” Ben Hutton concluded.

Ben Hutton scored a huge goal for the Alzheimer Society on Thursday afternoon.

Josée Roy-Pilon, the Campaign Coordinator at the Alzheimer Society of Cornwall & District, was in attendance for the fundraiser.

“Ben Hutton has a personal connection with Alzheimers and dementia with some family members having been touched by the disease. We were very happy to be approached by Riverside Chrysler who put this event together.

Being involved in the community is very important to us because we want the community to be aware of the services and programs that we have to offer. Not only for those who have dementia or Alzheimer’s, but also their caregivers and families.

We have day programs for the individuals who have Alzheimer’s and dementia. We also have support groups and services throughout SDSG and Prescott, Russell, and Akwesasne. We actually help 3600 families in the area, so it really makes an impact. Awareness of Alzheimer’s helps get rid of the stigma for those living with the disease”, Josée Roy-Pilon added.

Steve Paquette, who is a Business Development and Community Relations Specialist at Riverside Auto Group , was pleased that Ben Hutton could participate in the fundraiser today.

“We’ve known Ben and his family, the ownership of Riverside, and myself, his whole life. Like Ben has mentioned, his family is touched by the disease. We had a golf tournament in Kemptville about a month ago. We started talking about the idea of having Ben come out here to the dealership, meet some people, and raise some money for the Alzheimer’s society,” Steve Paquette said.

Alzheimer Society of Cornwall & District is located at 106B Second Street West in downtown Cornwall. Visit in person or visit their Facebook page to make a donation.