by Editorial Board
in Columns, News and Announcements
Reading Time: 2 mins read
34 3 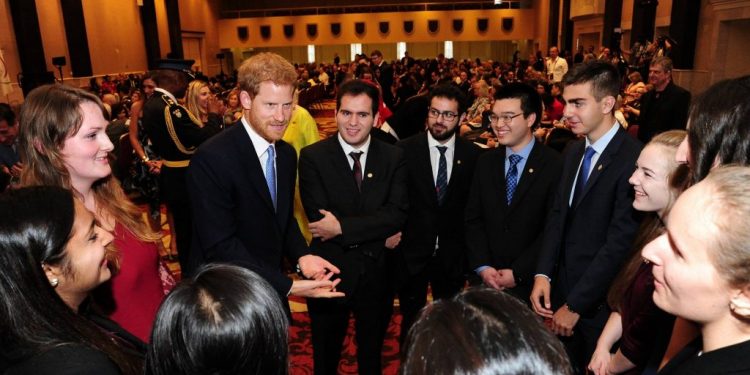 Heather Smith, a former resident of South Stormont and member of 325 Cornwall Kiwanis Royal Canadian Air Cadets is seeing gold these days. Heather has recently been awarded her gold standard for the Duke of Edinburgh Award, which was present by Prince Harry last week in Toronto. She has been working her way through the levels, bronze, silver and gold since 2008 both independently and with some support through the air cadet program.

The Duke of Edinburgh Award is a program for youth with five main aims: service, skills, physical recreations, adventurous journey and residential project. The Award was created by Prince Phillip, the Duke of Edinburgh, as a way to engage youth in Commonwealth countries to challenge themselves to become better rounded citizens of their communities by developing their own challenges and missions.

Heather completed the bronze standard in 2008, the silver standard in 2010 and gold about 4 years ago, all as a teenager. She  was only recently awarded the gold award as that level is only awarded to successful individuals by a member of the royal family; Prince Harry in her case.

She completed the service aspect of the award volunteering at various opportunities with the Cornwall Kiwanis Air Cadets. Only 60 hours were required, but she opted for 120 hours just for the award. These hours are additional to the 40 hours required for high school graduation. For the skill component, she started out in the bronze award with playing the flute and by the end of gold had mastered the flute enough to successfully audition and study flute at Queen’s University.

The physical recreation component of the award was completed a lot with the activities she participated in as a cadet such as sports teams, canoe trips and adventure training. The residential project while at conducting training at the cadet camp in Trenton. The goal of the residential project is to develop social adaptability through involvement with others in a group setting for a minimum of 5 consecutive says. For the adventurous journey she travelled to British Columbia during the summer after her first year of university and completed a 4 day hiking adventure up the highest mountain in the southern Rocky Mountains. In preparation for the big hike, she climbed 21 smaller mountains in British Columbia in the 2 months leading up to it.

When asked about her success in the program, Heather indicated “The skills and challenges I’ve overcome with the award have lead me to expanding my horizons, encouraged me to take risks and build on the things I’ve learned.”

The Duke of Edinburgh’s award goes hand in hand with many of the goals and aims of the Cadet movement. “Being an Air Cadet inspired me to continue through all the levels of the award and gave me the opportunity to meet Prince Harry”, said Heather.

“One of the things that encouraged me to start this award was the promise that the gold award would be presented by a member of the Royal Family. I worked through the award and finally it all paid off with this once in a lifetime experience”

Agree to Disagree - Are we heading for nuclear war?