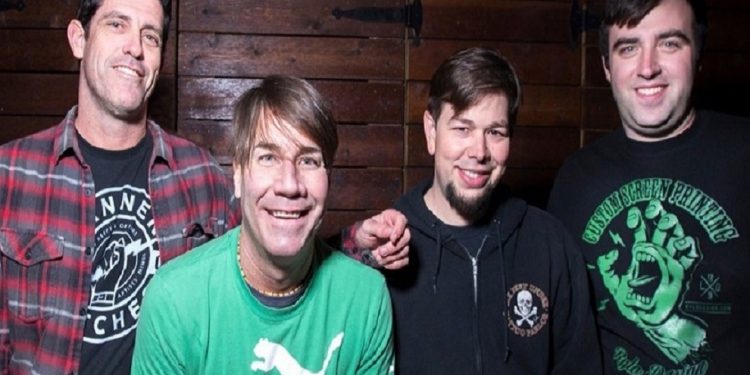 Ottawa Ontario – Punk legends Guttermouth, known for their explicit and humorous lyrics, are returning to Canada for a show on September 8th at Mavericks in Ottawa.

“I joined the band in 2008. I knew the old bass player Kevin, I grew up with him. He had got Dave Luckett in the band, who I was also friends with. Kevin went to presue other things and I got a random call from Dave one day saying they needed somebody to play bass. I said yes. I got a plane ticket to Florida and went out there and started touring with them. I am the drummer right now. I started with the band on bass in 2008. Then we lost a guitar player and I played guitar in the band for a few tours. I’ve been switching through instruments – drums, bass, and guitar the entire time I’ve been in the band. I’ve been playing drums in the band for the past two years. It would be great to find a solid line-up of players, but it’s hard for people to tour and stuff. With my life, I can work around touring. If we need a bass player, I’ll jump on bass, if we need a guitar player, I’ll play guitar, and if we need a drum player, I’ll play drums,” Justin Van Westbroek said.

The first time Justin Van Westbroek drummed was at the age of four.

“I started playing drums when I was four. My parents bought me a Smurf drumset,” Justin Van Westbroek added.

“It just fit perfectly. We were friends with Garrett. He had his Bird Attack radio show going. He started talking about starting a record label. He wanted to release our new album. He was our friend, and we’d rather do stuff with our friend versus somebody we don’t know. We trust our friends, and he’s helping us out. We’re helping him out at the same time. We were trying to get back to Europe. It was about ten years since the last time the band had been to Europe. Garrett had a label manager who lives in Holland or somewhere around there, and she suggested Rude Records. It just worked out great – we all fit each others mould,” Justin Van Westbroek reflected.

One of the best songs off the two new EP’s is a song titled “Freckles The Pony”.

“We were in Australia when we wrote a lot of those songs or had a lot of the ideas for the songs. There was definitely a lot of drinking going on, and someone said Freckles, and then Freckles the Pony and it turned into a song. There’s no message behind it, it’s not that serious, but people like it, and it works,” Justin Van Westbroek recalled.

In 2017, Guttermouth released “The Whole Enchilada”. It features remastered versions of the songs off the last two EPs, plus a brand new live album that reflects the new line-up.

“The first live record Guttermouth did was close to the original lineup that most people know that played on the first full length record and on “Friendly People”. The second live record was close to the original lineup but had a different drummer. I’ve seen each lineup of Guttermouth’s lineups since the very beginning. Although it sounds like Guttermouth there are still some differences. Mark’s there, Mark’s always going to be there. We were on the road touring a lot. I had brought a recorder along with me and recorded 2 or 3 years worth of live shows. Initially, a few years back, we were going to put out a live record on our own, but we kind of shelved it. Once we met up with the Bird Attack, and Garrett decided he wanted to release our music we just started writing a bunch of songs and got really inspired and motivated. Let’s put out a double record and a new live one. We’re pretty happy with it,” Justin Van Westbroek declared.

Are Guttermouth live shows still as wild as they were in the 90s?

“Mark’s definitely a lot older so I would probably say no, haha. They were really wild in the 90s when everyone was young. Now all the people at the shows from the 90s all have kids, and they’re bringing the kids to the shows. But they’re still wild – more wild than a lot of other bands that I’ve gone and seen. Mark’s 51 years old, he goes wild, but not that wild,” Justin Van Westbroek said with a smile.

Fan favourite Guttermouth songs include “1,2,3… Slam”, “Asshole”, “End on 9”, and “Derek”. Justin Van Westbroek enjoys playing songs off the first two albums. It brings back a lot of nostalgia for him.

“I like playing anything off the first two records because that’s when I was into Guttermouth when I was younger. Every time I play those songs it’s kind of nostalgic. When I was 13 years old I never imagined being in Guttermouth,” Justin Van Westbroek said.

“There are two types of people that play music, those who say they want to tour, and those who can actually tour. Not everyone can do it, but everyone thinks they can do it. I’ve always gone on tour with my own bands and filled in for friends bands. I really enjoy being in different places every night and traveling everyday, and you can virtually be who ever you want when ever you want. When I got the phone call, I was excited of course. It didn’t sink in right away. I didn’t know Mark. I knew Dave who I grew up with. I flew to Florida to go on tour, and jumped on stage for the first show, and remember looking over and seeing Mark. I was like holy shit! It doesn’t sink in until you’re out there. Then you get to know him, then it becomes like anything else. I was definitely excited, and thankful and grateful for the opportunity. I know there are a million people out there that would do my job a lot better and probably a lot cheaper,” Justin Van Westbroek added.

For Justin Van Westbroek, playing in Guttermouth is like playing with close friends – it’s closest thing to being like family.

“Matt, the other guitar player is my cousin. Kevin, who is back playing bass, I’ve known for almost 30 years. I’ve known Mark now for about ten years, and we’re really good friends. I’m really good friends with Geoff too. I met Geoff on that first tour I did with Guttermouth before Geoff was in the band. His band The New Threat ended up touring with Guttermouth a few times. We enjoy doing it. We’re all friends and pretty much family. That’s the best way to tour. It’s not who is the best player is in the world, it’s about who you will get along with the most because you’ll be spending literally all your time with these people. Driving with these people all day, sleeping in the same room at night, working with them while playing on stage – it’s just non stop. You spend more time with them then with anybody in your life,” Justin Van Westbroek disclosed.

Guttermouth are looking forward to their return to the Nation’s capital.

“It’s a Friday night, everyone should come out. It’s been a while since we played in Ottawa. We are promising you guys a good show. We’re very excited to be back at Mavericks,” Justin Van Westbroek concluded.

On Friday, September 8th, 2017 see Guttermouth, The Valveenus, Goat, Shootin’ Blanx/Dreaded Rebels at Mavericks in Ottawa. The show is hosted by CHORD Productions. Doors are at 7pm, the show is 19+, and tickets are $15.

And the tastiest burger of them all is... - Winners of Le Burger Week revealed!