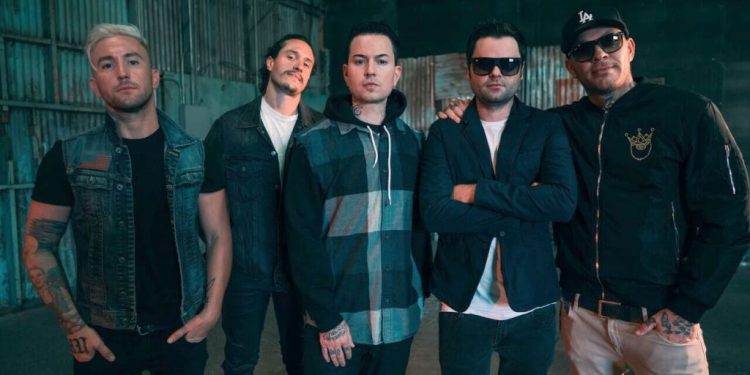 The new album is their fifth release, and there are also five members in Hollywood Undead, so the title choice made a lot of sense.

“The title just made sense for a lot of reasons. Thinking of album titles is always a challenge because we write different kinds of songs. After going through all the work of writing a record, you have to think of a name which can be a real pain in the ass, because no one agrees and stuff. It’s funny because ‘five’, when I said it, I think it was the first time there was a unanimous agreement on what to name it. It made complete sense and we went with it,” Johnny 3 Tears said.

The album “V” (five) is going to be Hollywood Undead’s first album released on their own label.

“We have our own label now called MDDN. We fulfilled our contract to Interscope. There are advantages to being on a major label, but it’s challenging enough to make the band members happy, but before you can do that you have to make sure the label execs are happy. A lot of times your viewpoint is different than theirs. The best part of doing it on our own is that we are only accountable to ourselves. The other aspect is it’s a lot more work because you have to do a lot of things a label does, but we enjoy it. We’re learning more and more about the record industry. It’s actually really fascinating. We wanted to do it so we didn’t have to answer to anybody but ourselves,” Johnny 3 Tears explained.

The first single off the album is titled “California Dreaming”. Since July, the song has had nearly 5 million plays on Youtube. The Hollywood Undead song is similar to the title of The Mamas and the Papas hit song California Dreamin’ – but it looks at California through a much darker lens.

“I love that song. Back in the 60s The Mamas and the Papas were probably on better drugs than what we have now, so they probably had a different interpretation. We wanted to write something edgy with California Dreaming, and the title has nothing to do with the other song. Our interpretation of what California Dreaming is, and what Los Angeles is, there is a huge filter between what people see. From celebrities to movies they see imagery that represents California. We’re fans of representing the actual Los Angeles, and go beyond the walls, the imaginary lines that boarders are projected by.

There is so much money in Hollywood, but we also have tent cities, and the largest skid row, and most people don’t even know it exists, and they don’t want people to know it exists, because they want the money to keep coming in – and people keep coming. It’s an interesting juxtaposition because you can be in Beverly Hills and one of the wealthiest neighborhoods in the world, and drive ten minutes and be in one of the poorest communities (in the United States at least). They hide that and we try to write our music about that. We want to tell our story as honestly as possible, so people can get a better understanding of where we come from,” Johnny 3 Tears elaborated.

Another fantastic song off the new album is titled “Black Cadillac”. Hollywood Undead collaborated with B-Real of Cypress Hill and Prophets of Rage on that track.

“Here is how that collaboration came about. B-Real is another L.A. dude, he has a podcast we’ve done. He’s a cool dude and to be honest I grew up on Cypress Hill as a lot of people did in the late 90s. He’s a legend not only in L.A. but in the world. He’s a fantastic rapper and a fantastic song writer on top of that. It’s weird when you look up to someone when you’re really young, and all of a sudden you’re working with them. The coolest part about it is that he hasn’t changed a bit. He’s still as good and sharp as he ever was and I thought he brought something only B-Real could – his style, his sound, and his influence. We were just super happy he wanted to be on a track with us, and wanted to work with us. The honour was all ours. He’s doing great things with Prophets of Rage now. I’m really happy to see him still going strong,” Johnny 3 Tears replied.

Canadian fans will be able to hear the new Hollywood Undead songs live when their tour commences on November 2nd.

“Our Canadian fans are one of our biggest support groups. We got a number one record in Canada which is the only number one record we have, so I have to say thank you Canada for giving us that honour. I love the vibe in Canada, it’s different than the U.S., and it’s a cool cultural experience, and we can’t wait,” Johnny 3 Tears concluded.

Talking about charts, their 2013 release Notes From The Underground hit #2 on the Billboard Top 200 in the United States, and in 2015 their smash song “Day of the Dead” was streamed over 21 million times on Spotify, and over 17 million times on Youtube and VEVO.

In the past, Hollywood Undead have toured with bands like Avenged Sevenfold and Stone Sour. They have also played major music festivals across the globe.

For their 2017 North American Tour, Hollywood Undead are hitting the road with Of Mice and Men and Avatar. Their Canadian tour starts November 2nd in Vancouver at the Commodore Ballroom, and continues November 4th in Calgary, November 5th in Edmonton, and November 7th in Winnipeg. Preorder “V” on Itunes.