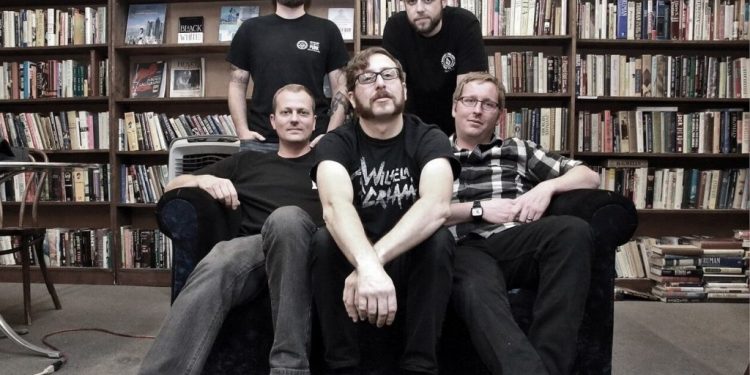 Denver, Colorado – Allout Helter have a new album out titled “The Notion of Control” released on Bird Attack Records.

The melodic hardcore band debuted in the summer of 2008, and they have been going strong ever since.

“Allout Helter started in summer 2008 and I joined the band in 2010 after Fred (guitar) answered my Craigslist ad that I’d posted after my previous band broke up. I wanted to sing in a new band, the Helter dudes wanted to bring in a front man to take over vocal duties so they could focus on shredding. We’ve been making tunes and playing shows together ever since! I like to think that it’s one of the most successful Craigslist meet-ups of all time,” said Allout Helter vocalist Ross Hostage with a smile.

Garrett Wadford of Bird Attack Records is a fan of Allout Helter and signed the band. The label which hosts numerous punk bands including 88 Fingers Louie and Belvedere was the perfect fit for Allout Helter.

“I don’t remember exactly when Garrett and I started chatting, but, to paraphrase a conversation, he pretty much told me “I’m gonna put out your next record” after we self-released our Ruins Ep in 2015. The man knows what he wants! Bird Attack is a perfect fit for us because they focus on our style of music: fast, technical, loud, melodic punk and hardcore. We get to share a roster with amazing bands like 88 Fingers Louie, Such Gold, The Human Project, Our Darkest Days, Almeida, Wraths, Authority Zero, Belvedere and a lot of other rad friends. We’re just lucky that Bird Attack Records thinks we’re the right fit for them,” Ross Hostage explained.

“So much of our lives, from our day-to-day mundanities to how our government tries to run this country, has to do with an over-abundant need to control things. But the title comes from our song “Tabula Rasa,” which is about humanitarian crises all over the world, how we conceptualize refugees, immigrants and borders, and this idea that reactionary xenophobia does not equal personal safety Once we realize that we really have very little control over being “safe” and that we’re all just the same people trying to get through this life, maybe we can focus on treating each other better,” Ross Hostage added.

On this album Allout Helter collaborated with Trevor Reilly of A Wilhelm Scream.

“It was absolutely amazing. Trevor is one of the nicest dudes and such an expert at the style of music we play. He also had an incredible work ethic and spent some really long hours with us in the studio, which definitely led to plenty of fun moments. Having him there to help us develop tones, choose takes and flesh out some of our ideas was an invaluable part of our recording process,” Ross Hostage noted.

Nuno Pereira of A Wilhelm Scream also contributed to the song “Speed of Blight”. It’s one of Ross Hostage’s favourite tunes off their new album.

“That’s a tough call. “Speed of Blight” has a guest vocal from Nuno Pereira (A Wilhelm Scream), so that’s pretty special to all of us. It’s also one of my favorite songs for which Fred wrote the lyrics and it’s just such a banger. As far as stuff I wrote, I’m just proud and happy that I wrote some choruses on this record,” Ross Hostage replied.

Allout Helter also played a show with Anti Flag earlier this year. The event was titled “Punk Against Trump” and it took place in their home state of Colorado.

“The Punk Against Trump show we played in January on Inauguration Day this year was really something. The anger and sadness was so palpable, it was incredible to be able to join a packed house in a very necessary release of energy. We raised $3000 for organizations in Colorado fighting against the Trump administration’s agenda and we hope to bring in even more people this time. Getting a stellar and thoughtful band like Anti-Flag to headline the show is just icing on the cake,” Ross Hostage concluded.

Pick up the new album online.

The Book Nook: Review of The Hidden Life of Trees by Peter Wohlleben