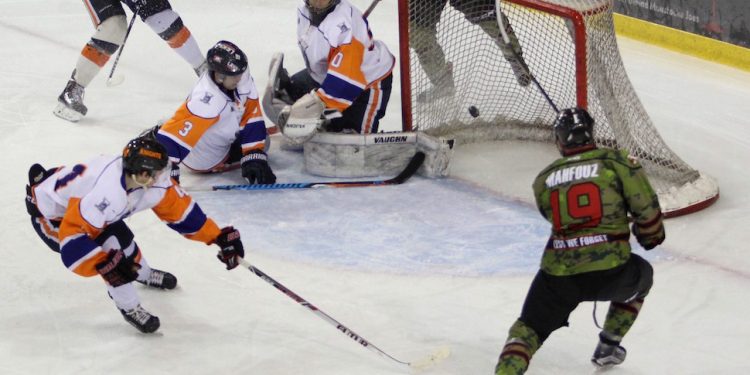 Cornwall, Ontario – Two Federal Hockey League teams heading in opposite directions collided at the Civic Complex on Saturday night and the result was almost predictable.

Cornwall Nationals skated to a 5-4 victory over the North Shore Knights in front of 682 fans. It was the first-place Nationals’ fourth straight win and the Knights’ seventh straight defeat.

Maxime Guyon led the Cornwall attack with a five-point performance (two goals and three assists). The Nationals improved to 9-2-0-2.

The Knights struck first on a goal by Patrick Porkka just 16 seconds into the contest.

The speedy Guyon then dashed up the left wing, beat a North Shore defender and found a wide-open Ahmed Mahfouz, who leveled the score for Cornwall at 5:33 of the first.

Brandon Vuic gave the Nationals a 2-1 lead with 3:02 to go in the opening period. Guyon’s shot was stopped but Vuic pounced on the rebound to beat North Shore goaltender Adam Zeman for a powerplay marker.

Cornwall Nationals opened up a two-goal lead just 46 seconds into the second period on a Guyon goal.

The Knights fought back however on a pair of Matyas Kasek markers at 6:21 and 10:19 of the middle frame.

Moments after taking a hard hit from Dominik Fejt, Mahfouz gave the Nationals the lead once again with 4:28 to go in the second, burying a perfect pass from Guyon. On the ensuing faceoff, Cornwall defenceman Jay Kenney dropped the gloves with Fejt to the delight of the local fans.

Guyon then scored his second of the evening with an unassisted effort with 1:48 to play in the second to give the Cornwall Nationals a 5-3 lead.

But, North Shore fought back on a goal by Kasek, who beat Sebastien Dube-Rochon once again for his third of the contest, at 12:06 of the third.

The Cornwall Nationals are back on home ice for a pair of contests next weekend. Cornwall hosts the Danville Dashers on Friday, Dec. 22 and the Port Huron Prowlers on Saturday, Dec. 23. Both FHL contests begin at 7:30 p.m.