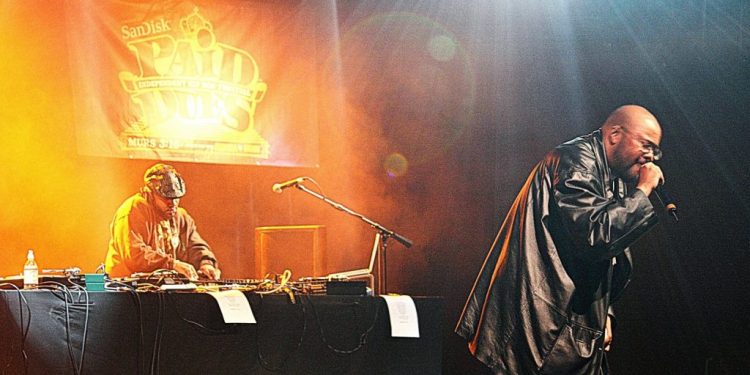 Ottawa, Ontario – California hip-hop duo Blackalicious are bringing their radical rhymes and bodacious beats to the Nation’s capital in the new year. They are playing on Saturday, January 13th, 2018 at The 27 Club in Ottawa’s historic ByWard Market.

Even if you don’t immediately recognize Blackalicious by name, odds are you heard one of their songs – especially if you are a Harry Potter fan. Actor Daniel Radcliffe recited the full lyrics to the Blackalicious song “Alphabet Aerobics” on The Tonight Show with Jimmy Fallon.

The video, uploaded about 3 years ago, went viral and has been played over 79 million times.

Blackalicious were given a heads up to watch that episode of The Tonight Show, but Daniel Radcliffe’s cover was a complete surprise to the band.

“We got a text from Roots, we worked with him in the past. He said, watch The Tonight Show and TRUST – in capital letters. We watched it, and saw it, but didn’t know it was going to happen. It was great. It’s had over 79 million views. It put new life to a song we did in the 90s. Now different people are doing renditions, kids are doing renditions of it, animators, and even a news broadcaster did a rendition of it. It definitely gave the song new life! Shout out to Daniel Radcliffe,” Blackalicious vocalist and lyricist Gift of Gab exclaimed.

The song uses alliteration, from A to Z the song’s tempo speeds up with each passing letter.

“When we did “Alphabet Aerobics”, we asked ourselves, what can we do that no one else has done. We brainstormed, and said why don’t we do the alphabet, and why don’t we make each letter go faster, and I made it a point that each line would be the respective letters from the alphabet, and each bar would get faster,” Gift of Gab explained.

Gift of Gab started writing at the age of 13 as a battle MC.

“I started writing when I was about 13, I started as a battle MC, trying to compete with other MC’s. Back then it wasn’t necessarily insulting the person you were battling. It was more about who had the freshest rhymes. That’s how I use to battle. There were little jabs, but you weren’t researching their history and really trying to bring the person down like they do now. It was about whoever’s rhyme was fresher won the battle,” Gift of Gab informed.

“Chief Xcel is the other half of Blackalicious. He’s the music half and I’m the lyrics half. We’ve been working together since we were teenagers. We know where the other is at, and what vision we both have musically. When we write, he knows where I’m going to go lyrically, and I know where he is going to go musically. At the same time, we don’t. We stay unpredictable, and that’s what makes working with Chief Xcel so exciting,” Gift of Gab disclosed.

Gift of Gab describes the song writing process and the way he and Chief Xcel build off of each others work.

“Usually he’ll give me a beat, and I’ll write to the beat, and then he’ll add in what he needs to add in production wise. I’ll go back in add what ever I need to lyric wise. I get a track, I write to it, I give it back to him, and he adds elements, he gives it back to me and I change whatever elements need to be changed, and we build the track up,” Gift of Gab replied.

In 2015, Blackalicious released Imani Vol. 1. Fans can expect Volume 2 to be released sometime in the spring of 2018.

“In regards to Imani Vol. 2. – we have a good 50 songs written right now. We’re going to pick 14 to 16 of the strongest songs and put that out as Volume 2. We expect to have it out late first quarter, or early second quarter. You can expect Imani Vol.2 to come out in 2018, it’s coming together lovely,” Gift of Gab said.

One of the songs off of Imani Vol. 1. created faux controversy among the political right. Some accused the music video “On Fire Tonight”, which addresses issues like police brutality, as nothing more than propaganda.

“I think everything we were saying in the song “On Fire Tonight” was valid and something that the world is dealing with. It’s so blatant, how can it be called propaganda? I don’t agree with that at all,” Gift of Gab responded.

“It’s pretty blatant that the government is corrupt. It use to be grey area. At this point it is so obvious. Media, politics, economics, even religion to a degree are used in the wrong way, and used to keep people asleep. Keeping people focused on stuff like reality TV, instead of the fact that most of the wealth goes to 1% of the people. Issues like police violence, I’m not just saying it, it’s something that’s been exposed on camera, and it continues to happen. To not speak out against it, you’re just being a robot in my opinion – that’s how I feel,” Gift of Gab added.

Blackalicious are looking forward to playing Ottawa again in the new year.

“I was just in Nelson, BC a few weeks ago. I did a Gift of Gab solo gig out there, and it was to a sold out room. The people of Canada have always shown us love. Blackalicious will continue to come back to Canada. I’m excited to play Ottawa again. We’re going to play some new, some old, a mix of everything. We’re going to give the audience the full Blackalicious experience, of where we’ve been at, and where we’re at now.

Spectrasonic presents Blackalicious on Saturday, January 13th, 2018 at The 27 Club in Ottawa. Poetic Elements are opening the show. Doors are at 8:00pm and the show starts at 8:30pm. This event is 19+ and tickets are $22.50. Tickets are available at Vertigo Records, NRML, both Compact Music locations, as well as online.