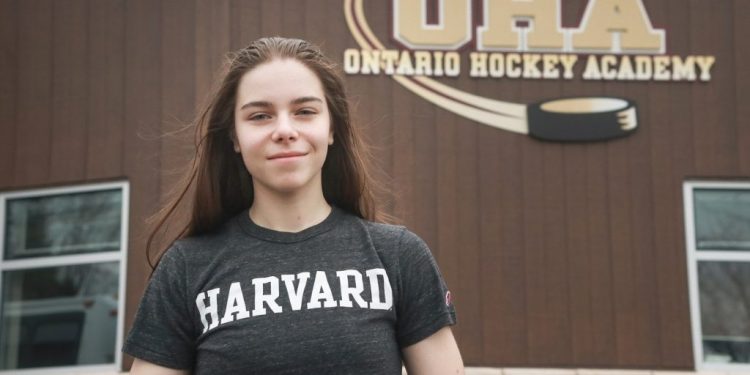 Cornwall Ontario – When Gabrielle Davidson Adams laced her first pair of skates at the age of 6 she never dreamed that it would take her from Cornwall, Ontario to Cambridge, Massachusetts.

However, by the time she joined the Ontario Hockey Academy (OHA) two years ago in Grade 8, she knew she wanted to play University level hockey.

Now, as a Grade 10 student in her third year at OHA, her dream is becoming a reality. Gabrielle Davidson Adams is Harvard University bound and partnering with them through the application process.

“I remember it was after the Stoney or Detroit tournament – Giles Lascelle scheduled a phone call. After the phone call they told me they’d like me to come visit Harvard. I met all three coaches. I also got to watch them practice and play. I walked around the campus, and I really liked it,” Gabrielle Davidson Adams recollected.

At just 15 years old, Gabrielle Davidson Adams, is one of the top hockey players at OHA, and she is also an honour roll student with a 4.0 GPA.

Born and raised in Cornwall, hockey has been a passion for Gabrielle Davidson Adams since she was just 6 years old. In Grade 1, Gabrielle started figure skating. However, when she saw a hockey game being played right after a figure skating session one day, she knew that’s what she wanted to do instead.

“I started to figure skate at the age of 6, that’s how I learned how to skate. After one of my figuring skating sessions, there was a hockey game being played on the ice, and I said that’s what I want to do. So I joined the Cornwall Typhoons,” Gabrielle Davidson Adams recalled.

In Grade 8 she made the transition to the Ontario Hockey Academy with the goal of playing Div I hockey after high school.

“I felt like I needed to play a higher level of hockey, but still be close to home. My goal coming to OHA was to play Division I. I always had big dreams to play hockey. I love the life here at OHA, being surrounded by my best friends, having fun, and playing hockey with them. I like that the teachers are there to help you too, and they’re always there to guide you,” Gabrielle Davidson Adams replied.

Gabrielle Davidson Adams, who wears number 20, and plays forward centre got the promotion to play at the intermediate level, despite her young age. She has taken on a leadership role, and wears the “A” on her maroon jersey, as an assistant captain for the Girls Junior team.

“My hockey has been good. It’s been challenging at the intermediate level, but I’ve been able to adapt and keep up,” Gabrielle Davidson Adams said with modesty.

Gabrielle is second in points playing with the Ontario Hockey Academy Girls Junior team. She has 10 goals and 6 assists in just 12 games. She was also honoured as the Eastern Women’s Hockey Conference Rookie of the Month for October.

Also, in 2016, Gabrielle Davidson Adams played at the Ontario Summer Games, and this past summer she participated in the Team Ontario Identification Camp for players under 16. She hopes to be invited this coming summer to the U18 Ontario tryouts.

“I did really well. I felt it was a good experience being exposed and preparing me for the U18. It was nice being around coaches who have been around this high level of hockey and have been successful in hockey. It’s pretty awesome to have them as mentors,” Gabrielle Davidson Adams disclosed.

Gabrielle Davidson Adams has also received a lot of mentorship at the Ontario Hockey Academy from the coaching staff.

“Brad (Nicholson) was my coach first year, and he made me comfortable and confident when playing with older girls. Jenna (Lascelle) was my coach last year, and also my mentor. I always talk to her about hockey and what to do to get better. Kayla (Lascelle) has given me great advice too, like what I need to work on to improve. Giles (Lascelle) helped me with the recruiting process, he helped me a lot too. There is Pete (Montana), and so many others, I don’t want to leave anyone out. Everyone at OHA has played a part in my journey including my friend Jordyn Clark who has always been encouraging me,” Gabrielle Davidson Adams reflected.

Brad Nicholson, who coached Gabrielle Davidson Adams, thinks very highly of her skills and dedication to the game.

“She is one of the most dedicated hockey players I have ever come across, especially someone her age. I’ve known her for 3 years and I coached her as a midget in eighth grade. From the time I met her, this has been her goal. She is finally realizing her dream,” Nicholson said.

“She’s skilled, very determined in her goals, and loves to win. She is coach-able, listens, takes advice, and not afraid to try new things. She’s very grounded. She understands that she still has two years of hard work ahead of her before she finally does go. I fully expect that she’ll be ready,” Nicholson added.

Gabrielle Davidson Adams also notes how supportive her family has been of her endeavors.

Gabrielle’s parents are happy with the decision to enroll their daughter at the Ontario Hockey Academy, and they are very proud of her success.

“OHA was the best decision we ever made for her. Giles and Kim are amazing people. They have been a big part if Gabi’s journey and we will be forever grateful for their knowledge, wisdom and belief in our daughter. We know Gabi is in great hands at the Ontario Hockey Academy. What more could we ask for?,” Gabrielle’s mother Christiane Davidson said with praise.

“With regards to attending the Ontario Hockey Academy, it’s been an amazing experience for her. It brought her a lot of structure so she can excel at her sport, but also to learn the discipline necessary to be a successful student-athlete. It’s a wonderful environment, and she is absolutely enjoying her time there. OHA is preparing Gabi for post secondary education with a rigorous and challenging routine, giving her more independence, and of course, a great teaching and coaching staff,” Gabrielle’s father John Adams added.

“Also, with Harvard, it’s unreal. Never in my mind did I think of Harvard. We’re so proud… It’s unbelievable! Gabi has been preparing for this for a long time. On the ice she doesn’t play for herself. She plays with a team first mentality, which is great,” Davidson pointed out.

“We’re honoured to partner with Harvard to help Gabi go through the application process. Gabi has been working extremely hard and sacrificed a lot over the years. She is extremely driven and has many goals she wants to reach. It’s something she has worked very hard for, and we’re thrilled,” Adams stated.

From coaches like Brad Nicholson, Jenna Lascelle, Kayla Lascelle, Pete Montana, and Taylor Noseworthy, to trainers like Jeff Gibbs and Benoit Veileux, to people like Brian Tradiff, Rod McLeod, Claude Seguin, and Kim and Giles Lascelle – it took a village to help Gabi become the athlete and person she is today.

According to Gabrielle’s mother, the most important lesson she learned was from Brian Tardiff: “Student comes first in student-athlete.”

“I remember when Gabi was very young and started skating, the first thing Brian Tardiff would ask her is how are your marks at school? Gabi would say, my marks are very good. Brian would remind her that student always comes before athlete. She’s always taken that to heart. I think Brian Tardiff would be especially proud of Gabi,” Davidson revealed.

“We mentioned Brian Tardiff having a big impact on Gabi, but also Rod McLeod from Cornwall Typhoons, who saw something in her at a very young age. These two men have always supported her tremendously. Also, there was her uncle, Claude Seguin, who passed away on Monday, December 4th. He was also a very big fan of Gabi’s. He was involved in athletics for most of his life as a teacher (at La Citadelle), and was always very encouraging to her,” Adams concluded.

The Ontario Hockey Academy, which is celebrating it’s 10th anniversary, is a hockey and academic prep school located in Cornwall, Ontario. It has approximately 140 students (including international students) attending academic classes, living at the dormitory on campus, and training on and off the ice. OHA has a total of eight hockey teams – five boys teams, and three girls teams.

The girls program at the Ontario Hockey Academy is one of the most successful in North America. It includes over 100 alumni playing University hockey including National Champions for NCAA Div I, NCAA Div III, and CIS. OHA alumni have attended schools like Princeton University, Cornell University, and Boston University. In 2014 one OHA student played at the Sochi Olympics, and more are expected to play for their national teams at the upcoming 2018 Winter Olympics in PyeongChang, South Korea.

For more information about the Ontario Hockey Academy visit their website.