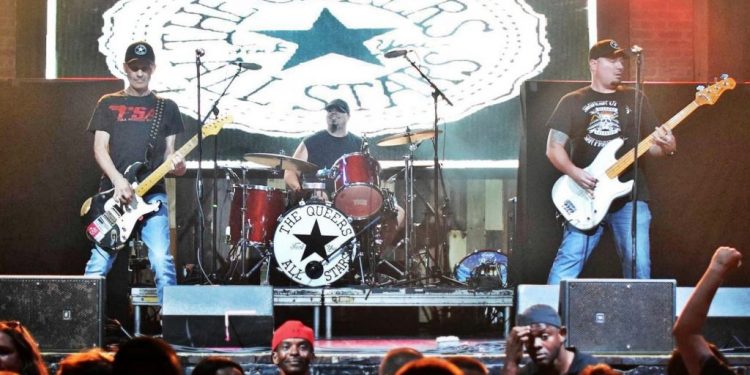 “We are almost done with a re-recording of our Punk Rock Confidential album. We’re calling it Punk Rock Confidential Revisited. We’re redoing it and releasing it on our present label Asian Man Records. All the songs are down off Youtube as well so we will be putting them up there as well. It’s coming out great! We dropped a couple of songs off it and added a few. Lots of different vocals as well so all in all I’m really happy with it,” Joe Queer said.

In addition to the re-release of Punk Rock Confidential, The Queers are also working on an album of brand new songs.

“As far as a new album we are about to start on that this fall. I have about half of it done so we’re all pretty psyched about it. It will be fairly poppy. It will be out in the spring on Asian Man Records,” Joe Queer stated.

Joe Queer also started a brand new label called All Star Records that will focus on Ramones style pop punk. He started listening to the Ramones about 40 years ago, and was inspired by their music.

Joe Queer’s punk rock journey began when he was in his junior year of high school. He dropped the trumpet to start playing guitar, and he started listening to bands like the Ramones and Sex Pistols around 1976-1977.

“I started my junior year in high school. I played trumpet for years in the school bands-about that time I realized I was only going so far with trumpet as I couldn’t play the staccato notes very well. So I moved onto guitar. My first guitar was a Heit. Some piece of crap guitar. The action was about 1″ high. Kids these days have it so lucky with these inexpensive guitars that play great. I suffered with a real piece of shit. I bought it for about $29 as I recall. I hitch-hiked home with it and it had no case. I had it going on at a relatively young age obviously. I got into punk about the time Sex Pistols and the first Ramones albums came out. I had been into David Bowie, Ziggy Stardust, Lou Reed and the Velvet Underground, Mott the Hoople, Ian Hunter, Iggy and the Stooges, and Creem Magazine. So it was a natural progression to punk rock. I loved it right off the bat,” Joe Queer reminisced.

The rest is history. In 1981, Joe Queer started The Queers, and in 1993 they had their first hit album. “Love Songs for the Retarded”, produced by Ben Weasel and released on Lookout Records, was the first album by The Queers to sell over 100,000 copies.

“Oh the songs just fit in with what was going on at Lookout Records. Ben Weasel producing it really helped. He’s such a great songwriter. It was great having him do some lyrics on a few songs for that album. Plus he arranged Fuck The World into a great songs. He came up with the guitar lead. Man, it is a killer song we still play. The whole album was a lot of fun to record,” Joe Queer noted.

The Queers paid homage to the Ramones and covered their entire album “Rocket to Russia”.

“At the time we needed stuff to sell on tour! So we did it. I honestly thought it was stupid. I don’t think you can improve on the first 3 Ramones albums. But hey we needed the money so we recorded it with Ben and had stuff to sell on tour. That was the driving impetus behind that. I love that album but Leave Home is my favorite. They’re all classics though honestly,” Joe Queer disclosed.

The Queers were also on the 1999 Fat Wreck Chords compiliation “Short Music for Short People” along with Nofx, Green Day, Bad Religion, Rancid, Descendents, Black Flag, Misfits, DOA, and a total of 101 bands.

“Oh I don’t know what happened there. Someone asked us, so we did it. Honestly it was fun. We wrote our song in the studio 5 minutes before we recorded it. I think that was how all the bands should have done it. A lot of them practiced and shit. We did it right there to keep in the spirit of the thing. I thought it was a good idea honestly,” Joe Queer reflected.

“Oh, we were recording in Boston at Q Division studio with Dusty Watson on drums. He played for Dick Dale for years. So just for shits and giggles we recorded Wipeout one morning as a warmup. I remember Matthew the engineer asked at the last minute if he should record it. It was literally a warmup throwaway thing. And somehow it got in the movie. Pretty cool. We didn’t really make anything off it because it’s not our song but it was cool nonetheless,” Joe Queer revealed.

The Queers also collaborated with Ottawa punk band The Riptides. The Queers song “See you later Fuckface” appeared on the Goblin Records compilation “Kick’em While They’re Down Vol.2” along with The Riptides, Dwarves, Dayglo Abortions, Guts, Moral Crux, Creeps, and The Nads. Joe Queer also sang guest vocals on the Riptides album “Drop Out”. Later, The Queers and The Riptides released a split album titled “Buy it you scum” which also featured The Queers cover of the Black Flag song “White Minority”.

“We heard about The Riptides from our old roadie Bulltit who now drums for the Riptides. He always told us how good they were so we listened and loved them right off the bat. Great songs! They asked me to sing on some songs, so I did. Nothing too thought out or anything. Just having fun with friends. Buy It You Scum is a takeoff from GG Allin’s song Bite it You Scum. I came up with that one I’m proud to say. White Minority we did just to have something to play live. I loved Black Flag, and still do. So we did it. We don’t play it much anymore because these wacko left wing liberal nuts started saying it was racist but it has nothing to do with racism at all. Of course none of that matters to left wing wackos. They bitch about any and everything. Whether they know what they’re talking about or not,” Joe Queer remarked.

The Queers use of satire seems to have gone over some people’s heads.

“Well of course, we’re in a band called The Queers, we shouldn’t be taken seriously. And yes, it seems a lot of the younger idiots in the punk scene just don’t get the joke anymore. A lot of it is obvious satire. That’s how the great punk bands got their point across – through humor. They were goofing on themselves. But all that is lost on these new self righteous losers who think they’re smarter than everyone else in the world. Sad to take yourself so seriously, but they do,” Joe Queer went on.

“I had the opinion the police officer was justified in his actions in Ferguson. Now, that’s just my opinion though a grand jury certainly thought the same I did as the officer was exonerated. But that’s not the point. The point was I dared to have a different opinion then these liberal nuts. I was attacked viciously. Accused of being racist and loving cops. It was crazy. I mean, hey, it’s my opinion. But it comes down to free speech. I dared to think differently and these people attacked me…. But I keep an open mind. And hey, one time I dared to utter an opinion, I could be wrong who knows? I was attacked. It was pathetic,” Joe Queer declared.

There were calls by the Babely Shades, an Ottawa artist collective, to stop The Queers from playing their Ottawa show in 2016. Eventually, the show went ahead as planned.

“As far as the clueless dolts in Ottawa… Baby Shades or whatever they were called, they never came to a Queers’ show in their lives, but they attacked us saying they didn’t feel safe at our show. They never came to a show, never met us, but they want people to boycott our show because they themselves didn’t think they’d feel welcome. I mean you can’t make this crap up, it’s ridiculous,” Joe Queer added.

Despite the controversy at their last Ottawa show, Joe Queer is looking forward to playing Ottawa again sometime soon.

“Hell yeah, I love Ottawa. Always have. It’s a wonderful open minded diverse city. Love the people there. Been playing there for over 20 years. Love it there. We’ll be back.,” Joe Queer confirmed.

The Queers 40th anniversary is in 2021. Are there any special plans? Re-releases, world tours, anything like that?

“Wow-didn’t realise it was that long. Um no, we only go year to year. Busy as hell though still. This year and the previous two years we averaged 130 shows a year. That’s a show every 3 days! Eh, we’ll keep blasting away. We love playing shows,” Joe Queer concluded.

Photo of The Queers by Chuck Livid (Wiki Creative Commons).

10 reasons to check out the Cornwall Nationals