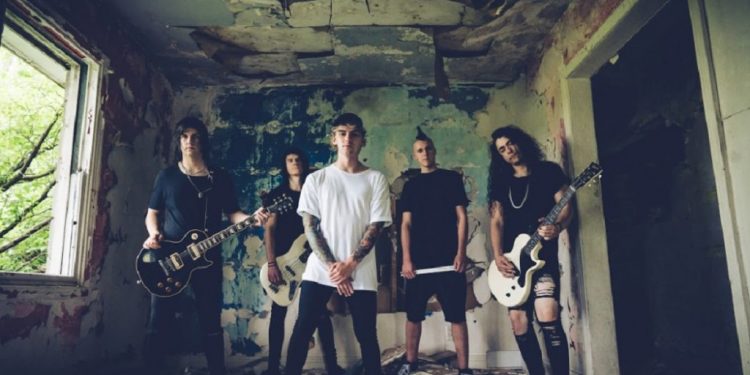 Montreal, Quebec – Montreal pop punk band Story Untold have a new music video out called “All the Same”. Unlike a lot of music videos coming out these days which just show cuts of a band playing live or in the studio, this video is more creative and tells a story.

“We basically wanted to tell a story with the music video. I think there’s way too many music videos in which you see the band playing and nothing else, we wanted to have something different from that. The director of the music video Alexandre Richard came up with this really cool idea the we all really liked, so we decided to go along with it. We wanted the video to have this 90’s punk rock and vintage look,” Story Untold frontman Janick Thibault explains.

To add to that 90’s feel, there are some skateboard scenes. This worked out well, because in his youth, Janick Thibault skateboarded a lot.

“Yes, back in the day I would skateboard a lot (I wish I was still as good as I was back then) and we wanted to incorporate that in the video because we thought it fit the vibe pretty well”, Janick Thibault stated.

The video for “All the Same” was winner of the International Underground Music Video award for “Best Music Video” and “Best Director.”

“It means a lot to us! We didn’t know we were actually going to be nominated and we actually won two prizes. It’s also our first video that involved such a meaningful story and acting. Overall it was just an amazing experience and we’re just very happy that people liked it”, Janick Thibault replied.

The song comes off their major label debut ‘Waves’ that came out February 2nd, 2018 on Hopeless Records.

Although Janick Thibault loves all the songs off the new album, he was able to pick a few favorites.

“I love them all, and I think they’re all very different from one another, so it’s hard for me to choose one. But if I’d have to pick one right now I think I’d go with “Dreams That We Don’t Share”. This song means a lot to me and I just love listening to it. It’s as simple as that. I have to say that “Delete” is very fun to play live, people go nuts at the end and they sing the words very loud, which is amazing because they don’t have to hear my terrible vocals if they sing it loud enough,” Janick Thibault said with a grin.

From day one Story Untold knew they wanted to be on Hopeless Records. It means a lot for Janick Thibault to be a part of that label and it’s rich music history.

“Back when we weren’t signed, and we were looking for labels, we had a list of labels we wanted to send demos to and Hopeless was at the top of that list. So it truly means a lot to us to be signed to that label. Their roaster is amazing and they’re just the nicest guys ever. They understand what we want and they wanted to help us achieve our goals without compromising our creative freedom,” Janick Thibault elaborated.

In his youth, Janick Thibault was a huge Green Day fan, and he quickly fell in love with other bands like Jimmy Eat World and Simple Plan.

“I wanted to be like Billie Joe Armstrong! As simple as that. I was the biggest Green Day fan ever and I wanted to do everything to look and sound like Billie Joe. My first concert was a Green Day show and I discovered Jimmy Eat World because of it. Then I started looking for bands like Green Day on YouTube and discovered many of my favorite bands like Sum 41, Bullet For My Valentine, Simple Plan, and more because of it,” Janick Thibault added.

It’s come full circle for Janick Thibault. One of the bands he idolized his youth, has now toured and become friends with Story Untold.

“We feel very fortunate to call the guys from Simple Plan our mentors but also our friends. They’re from Montreal as well and I think they recognize themselves in us when they were younger. I remember watching their music videos on Much Music when I was about 10 years old and now we get to play shows with them. It’s one of the best feelings ever,” Janick Thibault expressed.

Whether in the studio or on tour, Janick Thibault spends a lot of time with his band mates.

“Being in a band is like being married to 4 different people. Sometimes everything is prefect and sometimes it’s not. I think you learn a lot about a person when you’re stuck in a van for 2 months, but I think after every tour, we come back stronger and we still laugh at everyone’s bad jokes, which is a good thing. We’re 5 friends who share the same love and passion for music and when something is wrong, we sit down and talk about it together. Just like every relationship, I think communication is the key,” Janick Thibault noted.

Story Untold have lots of gigs this summer including Warped Tour in Toronto. Playing Warped Tour this year is extra special, because it was announced that 2018 would be the final year for the beloved music festival.

“Words can’t explain how happy we are to be on the last Warped Tour. I think it’s every musician’s dream to be on that tour. Every band I grew up listening to played on that tour at least once and to get the chance to be on it for the first and probably the last time is just an amazing feeling. One of my best memories from Warped Tour was actually 2 years ago when my friend and I drove to Columbus, Ohio to go see Sum 41, Good Charlotte, Bullet For my Valentine and more on that edition. I just love the vibe of that festival,” Janick Thibault concluded.

Vans Warped Tour 2018 will be in Toronto on Tuesday, July 17th. Other bands playing include Simple Plan, Sum 41, Every Day I Die, Reel Big Fish, and many more.