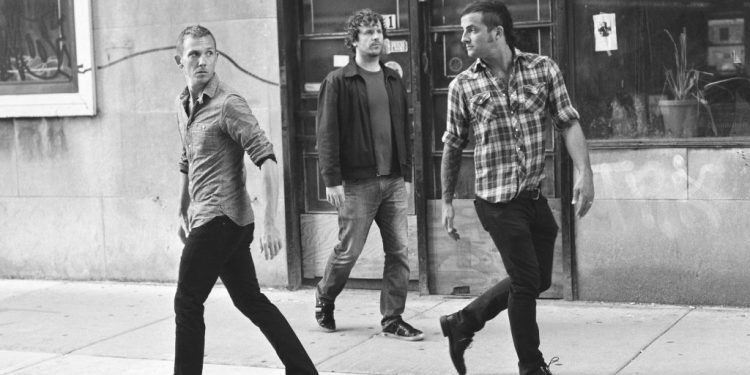 Chicago, Illinois – On March 30th, The Lawrence Arms new album “We Are The Champions Of The World: The Best Of” will been released on Fat Wreck Chords. According to frontman Brendan Kelly, the song selection for this anthology album was a daunting task.

“You know, it was kinda daunting. For one thing, we have a lot of songs, and since none of them were ever big radio hits or in movie soundtracks or anything, it’s a little difficult to really judge what constitutes a “hit”. That being said, we’re a band that has gotten just a wee tiny bit more popular with each record, so it’s not like we’ve got some song from the beginning of our catalog that “put us on the map” or anything. It’s a lot of our more recent material that are the ‘fan faves’ or whatever, but that presents a problem because, while i think that some of our fans would say that “Greatest Story” or “Oh! Calcutta!” could be considered collections of our greatest hits just as they are, it doesn’t make sense to totally cannibalize any one record too much, you know? If we put the six best tracks from any one record on this collection, then the record becomes sort of useless, and then the context of that record is totally lost. So we went with trying to approach the track list from more of a career overview perspective, as opposed to a “these are the f-cking jams” sort of thing. I made a master list, and then we had 3 people on the Fat team who are familiar with our catalog vote on each song. The winners made the cut,” Brendan Kelly stated.

One of Brendan Kelly’s favourite songs selected to be on the compilation is “Turnstiles”. It was originally released on The Lawrence Arms 2000 album ‘Ghost Stories’.

“I always go back to Turnstiles. This was one of the first songs Chris wrote for The Lawrence Arms and its always been one of my faves. to me it’s the perfect embodiment of what our band was trying to be at the time, and in terms of the way it flows and then explodes at the end, it was way ahead of where we were at when Chris wrote it, and I feel like it pushed both of us to be better. Also, I just love the last 30 seconds of that song. Maybe my favorite 30 seconds of our whole catalog,” Brendan Kelly explained.

The new album also has five unreleased songs that didn’t make the cut on The Lawrence Arms 2006 album ‘Oh! Calcutta!’.

“These were all songs that were potentially going to be on ‘Oh! Calcutta!’ but didn’t make it for one reason or another. Some are in demo form and some are closer to being fully recorded. Rabbit and the Rooster actually was completed and actually came out as a bonus track back when that sort of thing was still somewhat novel. We just dug them up, and it seemed like, if we were going to make this big awesome package and do something that would warrant us touring on and cranking up the machine again, it would only be reasonable to offer some unreleased material, right? This happens to be the only unreleased stuff we could find. So that’s why,” Brendan Kelly responded.

Chicago is an iconic punk rock City, and Brendan Kelly has fond memories of the scene.

“My two favorite shows were both at the Gateway Theater. One was Oblivion, and one was The Smoking Popes. Both of them forever changed what I thought was cool about music and performance. That theater was a dump, and both of those shows happened in the early 90’s. Pete Kourim from Oblivion gave me 2 pieces of advice the day of their show that have remained true 100% of the time all the way until today. Keep in mind, at the time, I was just a 15 year old kid, with no real band that was playing around or anything. I was just a fan. He said, “Every show is 50% audience and 50% band. If anyone doesn’t do their job, it’s not a good show.” and later, “You’re only as good as your last show”. These are the 2 most true things anyone has ever told me about performing,” Brendan Kelly reminisced.

The Lawrence Arms were formed in 1999, and soon gained the attention of Nofx’s lead singer. Fat Mike signed The Lawrence Arms to Fat Wreck Chords in 2001, and in 2004, the band appeared on the compilation Rock Against Bush Vol.2 along side Green Day, Bad Religion, Dropkick Murphys, Foo Fighters, Rancid, and No Doubt.

“I think Mike’s heart was in the right place when he did those (Rock Against Bush) records, and I also think it was pretty cool that he got so many high profile acts to be part of it. Ultimately, I guess it’s more of a gesture than any sort of movement, but, I guess the punk voter aspect was a pretty legit bit of activism that I’m proud to have been tangentially associated with,” Brendan Kelly replied.

Should there be a Rock Against Trump album in the lead up to 2020?

“I don’t know. Again, it’s more of just a gesture than anything and I feel like empty gestures are what our society trades in these days, thanks to Twitter and Facebook and so forth, so I don’t know. “Oh, a record is anti-Trump? Maybe I should alter my perspective”… doesn’t seem like a realistic thought that anyone is gonna have in this day and age. There’s enough punditry. I’m all for questioning and subverting authority, but, for one thing, being against something isn’t exactly a movement. That’s why people say they’re pro life or pro gun control. Against Trump isn’t much of a thing. For another, this is one that’s gonna either need to be decided in the voting booth or in the streets. Music’s power to galvanize is real, but music is also free and disposable and disembodied from any sort of physical packaging and stuff these days. A song on Spotify shuffle that you may or may not notice appeared on the “Rock Against Trump” compilation doesn’t seem to me like it would move the needle, discourse wise. But maybe I’m wrong, who knows?,” Brendan Kelly reflected.

When Brendan Kelly appeared on The Daily Show,  he criticized ex-Misfits singer Michale Graves, not for being a Republican (as stated on Wikipedia), but for wearing face make-up.

“I was making fun of him for being a grown man painting his face like a skull and not being Glen Danzig. I like to keep my mockery puerile. Being a conscientious Republican isn’t something I’m smart enough to go on TV and try to mock. Being a dork, however, I can handle,” Brendan Kelly said with a smile.

“I don’t actually think punk attracts more extremists than any other subculture. Plenty of people I talk to who identify as punk are pretty apolitical or are just political in rhetoric but not action. I think there are very few actively extreme political people in any given subgenre, but those people tend to make more interesting statements, and therefore get disproportionate visibility,” Brendan Kelly added.

In 2019, The Lawrence Arms will be celebrating their 20th anniversary. Are there any special plans?

“I think that this release kinda stymies any sort of 20 year anniversary re-release notions, which I’m fine with. I don’t really care about that stuff. It’s great. I am thrilled that people still care about our band, but I’m just trying to take it one day at a time and keep making good music. that’s what’s important to me. It’s hard to believe I’ve been doing anything for 20 years. That’s crazy in and of itself. I’m glad it’s a cool band, and not a prison sentence or something,” Brendan Kelly declared.

Will The Lawrence Arms be recording a new full length album?

“Sure. yeah. I mean, we have no plans now, beyond the fact that we’re all in this band and plan on still being a somewhat active band, so that means there will be more new music, but I’m currently working on a Wandering Birds album, which is another kinda soloish project that I do, so, at least form my end, there won’t be any new The Lawrence Arms material til that comes out,” Brendan Kelly concluded.

What will you do come June 7?