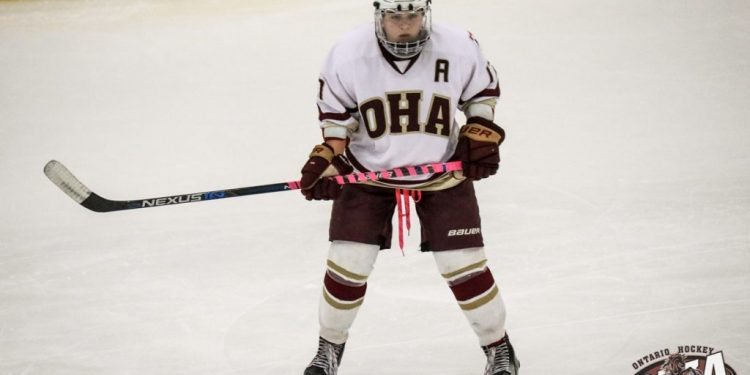 Cornwall Ontario – Wasyn Rice grew up in a small British Columbia town called Invermere. Being a part of an athletic family, and having three siblings, she was very outgoing from a young age. The first thing she tried was dance, but soon realized that wasn’t a sport she wanted to continue.

From watching her sibling’s hockey games and always participating in a friendly game of mini sticks, she decided to give hockey a shot at the age of 5 years old. She really enjoyed it and from then on it was clear that’s what she wanted to play.

Wasyn Rice played boys hockey for the first few years and loved it, but at age 12 she decided to switch over to midget girls hockey.

“It was way different and honestly not something I was into. The hockey was a lot slower I found and more technical, but I was very into the physical play so I stepped down from the midget girls and went back to boys,” Wasyn stated.

The following year Wasyn Rice moved just outside her old town and billeted with a family for two years playing girls hockey once again. She was also a part of the British Columbia Aboriginal girl’s team, and that’s where she was scouted by the Ontario Hockey Academy.

During that summer Wasyn Rice was debating if she could handle going to school across the country to play hockey. As the summer came to an end Wasyn had made her decision to take the next step in her hockey career and go.

It was challenging for Wasyn Rice to leave her family and home not knowing what to expect, but she was looking forward to the future and finding out what the Ontario Hockey Academy was all about.

Wasyn Rice, who wears number 17, proved to be a solid defensemen playing on the OHA Girls Maroon team (second top girls team at OHA) in her first year. That was extremely good for being in grade 10. She fit in well and had such an amazing sophomore year that she got recognized by Robert Morris University, an NCAA Division 1 school .

“I was in grade 10 when they first showed interest and I was very confused about the whole school situation, I had no idea what Division 1 or Division 3 even meant,” Wasyn added.

She was interested to learn more about RMU so she searched up their website and it looked like a good team so she kept it in the back of her head.

When the season wrapped up her coach said that if she worked hard over summer to improve her fitness level and some hockey skills, she would be on team Tardiff (top OHA girl’s team) for grade 11.

“All summer I trained and practiced my skills and shot to improve the little things,” Wasyn recalled.

By the time school started up again for junior year, Wasyn was in great shape for the new season and secured a spot on team Tardiff, and even earned the privilege to wear an “A” on her jersey as an assistant captain.

Wasyn Rice and her team were very successful this year and finished first in multiple tournaments. As grade 11 passed and November rolled around Robert Morris was still tremendously interested in Wasyn to the point of where they gave her an offer she couldn’t refuse, a full ride scholarship! Once she visited the campus, it was like everything felt right and she knew that was the school for her.

Wasyn’s family is proud and happy of her outstanding accomplishments at such a young age.

“My family was surprized but not at the same time because ever since I was younger I’ve always wanted to pursue hockey for a goal and as a career.”

Wasyn always showed that she was eager to learn and excel. Now, looking back on her three past years at OHA, Wasyn’s aware of all the benefits she’s encountered throughout her time here.

“The biggest benefit would probably be meeting everyone because it really brings your personality out and you get comfortable with different people and that prepares you for the future,” Wasyn expressed.

She also went into depth about how her coaches and teachers at OHA have been a great help with pushing herself to the limits whether it is on the ice or in the classroom, although Wasyn Rice was always a hard worker.

She will never forget all the memories made.

Now moving on to the next chapter of her life, Wasyn Rice can’t wait to start University and study Business Management. It was an intense and challenging experience on the road to success, but in the end it was well worth it for Wasyn Rice. She’ll never forget the atmosphere at the Ontario Hockey Academy and all her friends that she now considers family.

To learn more about the Ontario Hockey Academy, visit their website.