Interview with A Perfect Circle – New album Eat the Elephant 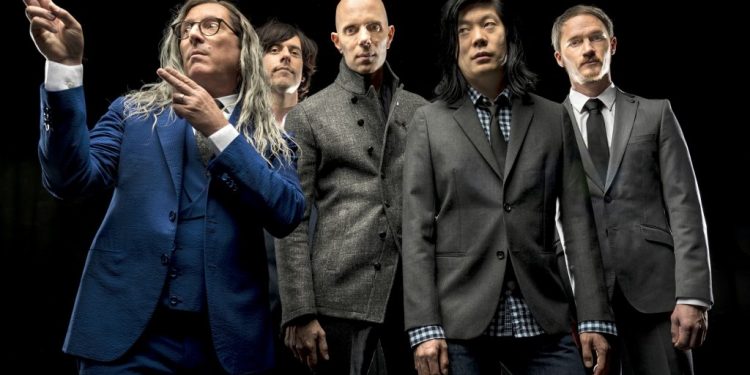 “Being in the studio was a very similar feeling to me from 12 years ago, 15 years ago, 17 years ago. It’s in the same way of having rough demos and going into discovery mode once we decide that these are the songs we’re working and we’re going to tighten them up. So, technology changes but the root of it is just using real instruments and finding what aesthetic we want this record to become or what aesthetic we want to have on it. Writing on the piano was a deliberate choice. I put the guitar down in 2014 or 2015 or so and decided to try and have some obstacles put in my way to get some different, creative avenues,” Howerdel explains.

A Perfect Circle worked with Grammy award-winning music producer Dave Sardy on “Eat the Elephant”. According to Billy Howerdel, it was an interesting experience, and it allowed him to focus more on the creative process.

“Working with Dave was interesting in that we’re a similar age, come from similar backgrounds, and musical tastes but there are things we differ on of course. It was nice to have another musical opinion in the room and one that I could respect and coming from a place that I might not be thinking of. It was great having him and his team to handle all the files and handle logistics that are usually bogging me down. It freed me up to be more in the creative process,” Howerdel disclosed.

A Perfect Circle is touring the United States, and they will be touring Europe this June. However, James Iha will not be on the current tour, because his other band The Smashing Pumpkins have reunited. Greg Ewards will be replacing James Iha on A Perfect Circle’s forthcoming tour.

“James and I worked on a few things but none of which made the record. When we started getting ready for the tour, James and I talked about the possibility of him going back to the Smashing Pumpkins, and that scenario started to get more solid, so we found a temporary replacement with Greg Edwards. I can speak for Maynard and myself when I say that we find Greg’s two bands very influential to us and we respect what he’s done, plus he’s in the family and a friend, so it was an easy transition to make. I’m very happy for James that is happening,” Howerdel stated.

Earlier this year A Perfect Circle released their first single off the new album called “Disillusioned”. The lyrics state: “Time to put the silicon obsession down”. A music video was also released for the song. What was the inspiration?

“When it comes to lyrics I can’t speak to it, that’s a Maynard question. When it comes to the concept for the video, there were many different little ideas that Maynard and I both had that might or might not be in the final version. The director took some light direction and took some liberties of his own, and some things are in there, and I guess that is what art is about. It’s about interpretation, collaboration with not exactly your ideas. I think you’d have to ask Alex Howard,” Howerdel replied.

In many ways, audiences today are the same as a decade ago. One thing that has changed is that everyone has a smartphone. Howerdel asks that the audience connects with the experience without the distraction of their phone and to live in the moment.

“You know, there’s a familiar energy with touring and sometimes it can be from region to region. You get into big cities, into more metropolitan cities and there’s almost less energy than when you get out towards rural areas. I think a lot of time that comes from fewer shows coming there, like a supply and demand thing. I think that’s consistent to this day. The thing that is different, everyone has access to their phone at any given time, and they are used to that. It’s difficult for people to put it down sometimes and be in the moment. We look at the place we’re playing as our living room of sorts, and we’re inviting people in to do a performance, and we ask them for one thing, that’s to be with us uninterrupted, connected with us without the distraction of their phone. It’s not always an easy thing to swallow, but it’s gotten more support than I thought it would,” Howerdel noted.

The song “So Long, And Thanks For All The Fish” has quickly become a favorite off the new album for Howerdel to play live.

“We just started playing the songs, so we’ve got three shows under our belt, but of the new songs, I’m enjoying playing Fish. It’s got a lot of different parts to it, and it’s challenging, it’s a more challenging guitar song to play because I have vocals to sing with it so that puzzle is something I’m still working out,” Howerdel said.

Billy Howerdel has been working on and off with Maynard James Keenan for nearly 20 years. According to Howerdel, he sets the bar high and brings the best out of him.

“Maynard always makes me bring the best of my musical abilities to the table. He can challenge you, and he can be inspiring by what he brings – I feel like he raises the bar, so I have to find it in myself to bring more than I thought I have. He’s never really content with the status quo, and I think you can hear that in everything he has done. He’s nurturing,” Howerdel replied.

“Well In my youth I didn’t know who either one of those guys was. I can, though, think in similar ways about meeting musical peers and having them be people I listened to when I was younger, and it’s a super surreal experience. To put yourself into that hypothetical time machine and revisit your sixteen-year-old self, so yeah it’s a pinch yourself moment once a while,” Howerdel said.

“At the end of Nails tour in 95 Trent told me to take two or three guitars as he gave away a lot of broken guitars to people as souvenirs. I got good at fixing them, so I took three broken guitars and had one repaired by Gibson and then fixed 2 myself. That became my go-to instrument, my sound has been made around that guitar, my main cinnaburst 1960 classic reissue, and my Marshall amp and it became the defining sound of what the guitar is in APC,” Howerdel said.

Also, Billy Howerdel is credited with contributing to the song “There Was A Time” on the Guns N’ Roses album Chinese Democracy.

“I don’t remember. I was involved in all of the facets of the computer recording with that project, and I don’t remember what or if any of my contributions made it. There are other songs I remember more than that one, it just might have been a polite gesture to give me credit,” Howerdel concluded.

Eat the Elephant shows the bands maturity and their depth as musicians. It’s not as hard as their previous work, but it’s an amazing record worth owning. Order the new album now.