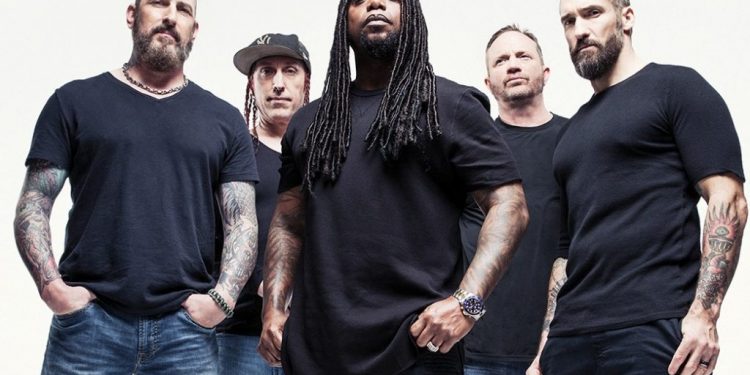 Atlanta, Georgia – On April 11th Sevendust released their new album “All I see is War” on Rise Records. According to Sevendust lead singer Lajon Witherspoon (LJ), the title of their new record is meant to be personal and not political.

“The inspiration for the title of the new album “All I see is War” was a personal one. Yes, there is conflict in the world today and violence, and when I was a kid I read about war. But we’re not trying to be political. We used the words “All I see is War” in the lyrics of the song Dirty, so it seemed appropriate for the album title,” LJ explained.

The album, which was recorded last autumn, was released on May 11th, 2018.

“It’s an amazing feeling knowing everyone can hear the music now. I’m excited and I’m nervous now that the new album is out,” LJ added.

The band, whose current line up features Lajon Witherspoon (lead vocals), Clint Lowery (lead guitar, backing vocals), John Connolly (rhythm guitar, backing vocals), Vince Hornsby (bass), and Morgan Rose (drums), have been together since 1994. Despite being together for nearly 25 years, there is a sense of newness with the album. Sevendust worked with a different producer and they were signed to a new record label.

Michael “Elvis” Baskette, who has worked with Alter Bridge, Tremonti, and Slash produced “All I see Is War”. He invited Sevendust to live with him at his Orlando home while recording, and he helped reboot the band’s sound.

“Working with Elvis on the new album was great, he’s an amazing music producer. He took us into his home in Orlando to live with him during the recording process, and wow, it was the best. Working with him in his studio was an experience. He’s so talented and creative. The ideas flowed, and we worked well together, and I’d love to work with him again. I’m so happy with the final product. Yes, it does feel like our sound got a reboot, and it feels fresh and new again,” LJ stated.

The most challenging part of the new album was the song selection process. The band wrote nearly 60 songs before going into the studio.

“We wrote about 60 songs and whittled it from there. We had a lot of time to write, which was great. Some of the songs we didn’t use this time, we might use later. Sometime in the future we’ll look back and see if there are some gems,” LJ noted.

The move to Rise Records also gave Lajon Witherspoon a sense of newness.

“We were excited to sign a record deal, that’s not something we’ve had to do in a long time. Everything feels exciting and new again. Being on Rise Records has been a great experience, and it’s given us the spark we needed. They have their finger on the pulse that is social media. We’ve already recorded three music videos, we’ve worked with a new record producer, and the label has been very supportive of us,” LJ disclosed.

The music videos for “Dirty” and “Not Original” both feature imagery of the band playing in dark futuristic places.

“For music videos like “Dirty” and “Not Original” I liked the lighting and the look, it created a great vibe,” LJ stated.

The song “Dirty” also peaked at #18 on the US Mainstream Rock for the Billboard charts.

Lajon Witherspoon would be delighted to get another Grammy nomination and even a Grammy win.

Sevendust’s song “Thank you” from their 2015 album “Kill the Flaw” was nominated for Best Metal Performance at the 2016 Grammy Awards.

In addition to earning the love and respect of millions of music fans, Lajon Witherspoon and Sevendust have been an inspiration to bands like Staind, Seether, and Alter Bridge.

“It’s incredible to know that I influenced other musicians, and they influenced me too, so it’s cyclical. I’ve always liked heavy music, I’m a fan of metal, and it’s wonderful to have that kind of respect from my peers.

Sevendust is headlining a US tour to promote their new album and will be visiting the UK later this year. Are there any plans for a Canadian tour?

“There are talks of a Canadian tour, we always enjoy playing there. The last time we were there we toured with Godsmack, and it was awesome. I can’t wait to get back,” LJ concluded.

The new album is available via the band’s merch store at www.sevendust.com as well as through all digital retailers.

Municipal talks break down in Cornwall