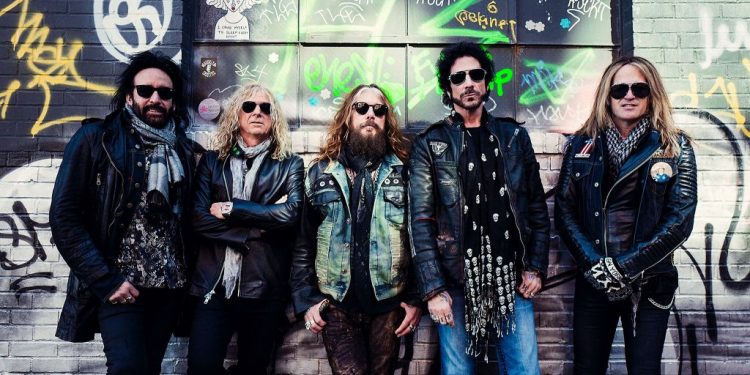 In March of this year, The Dead Daisies rehearsed new material at the renowned SIR studios in New York City before releasing their highly anticipated, brand new album entitled “Burn It Down” on April 6th.

“We went up to New York and wrote for about ten days. Everybody started writing and putting their ideas together. We got over 20 ideas together, and then we went down to Nashville and sat down and figured out which were the best 12-15 songs that worked together. Then we got into the recording process. It was a very collaborative effort; we do everything together. We put a new record together, and the response that we’ve been getting is nothing short of amazing. We’re all very pleased with it,” John Corabi recollected.

The first single off The Dead Daisies new album titled “Rise Up” had a lot of success on the radio. It’s the bands first Top 40 hit in the United States.

“It’s very difficult to get the radio to take notice of a new band. Our fans are calling in and being incredibly insistent on hearing the new songs and the new material. We can’t thank them enough, the ones who are making it happen. I believe it’s the first song we’ve had that’s in the Top 40 for radio in America ever. That’s a testament to our fans, and we see a growth in North America, and we are beyond pleased. It’s awesome,” Corabi stated.

“Of course, we’re excited about those gigs, but for us, it means we’re going to do some shows with good old friends of ours. Dizzy and Richard from Guns N’ Roses were involved with The Dead Daisies for a little while. It will be great to see them. We’re friends with most of the guys in the band. Myself, I know all the guys. I’ve been introduced to Axl a few times, but I don’t know him like the other guys. It’s going to be fun to see those guys and have a day where we hang out and talk about life, our wives, our kids, and all this great stuff. I think more than anything we’re excited to see some old friends. It’s going to be cool, it’s going to be a great time,” Corabi explained.

This Halloween, The Dead Daisies will also be playing the KISS Kruise for the fourth time. They will be sharing both a cruise and the stage with legendary rock band KISS. John Corabi was in Union and ESP with former KISS lead guitarist Bruce Kulick.

“This is the fourth for The Dead Daisies and the third time with me in The Dead Daisies. They did it one time before with their old singer. It’s the same thing with KISS; we know all these guys. One of the first guys I met in L.A. was Gene Simmons. The cruises are awesome, we get to bring our wives, and it’s a little vacation for our wives. We get to hang out with them, lay by the pool, talk with the fans, sit at the bar and have a cocktail with them, and mingle with them. It’s grown to the point where we meet a lot of the KISS fans when we’re on the road in America, and they remember us from the boat. They’ll say, we want you guys on the boat again, and it’s great seeing you guys at your show. We’ve become friends with a lot of these people. It’s cool, it’s always a great time, hanging out for five days. It’s like a five-day pool party with a bunch of old friends.

John Corabi was the former lead singer of Mötley Crüe replacing Vince Neil. With Corabi as the singer, Mötley Crüe recorded a hit album. The Dead Daisies are an all-star band of musicians, but don’t expect to hear songs like Mötley Crüe’s hit “Hooligan’s Holiday”. The catalogue of Mötley Crüe songs is reserved for John Corabi’s acoustic shows.

“We do cover, but it has nothing to do with our previous bands. When we’re with The Dead Daisies, it’s all about The Dead Daisies. We try to keep everything separate. If you come to The Dead Daisies show thinking you’ll hear “Hooligan’s Holiday,” my songs are reserved for when I’m doing acoustic shows, or I’m on my own,” Corabi explains.

John Corabi learned a lot about the music industry and life being in Mötley Crüe.

“Obviously, with every band you’re in, and every studio record you do, you learn something new every day. I learned a lot form Nicky, Tommy, and Mick about performing. I had a great time with those guys, and it was amazing. But I also learned about life. It weird, not so much the artists, but the friends around the artists. As soon as I got that Mötley Crüe gig I started to notice everyone around me changing. Tommy and Nicky told me that it would happen. I didn’t want to believe it, but I started to see my group of people hanging around me. I learned a very valuable lesson when Vince came back to the band, and I wasn’t in Mötley Crüe anymore. That group of people around me got very thin. I learned a lot of life lessons being in the band, and then being out of the band. It was an eye-opening experience,” Corabi reminisced.

After Mötley Crüe, John Corabi played acoustic shows, he was in Union and ESP, and he was also a guitarist for Ratt. Now he is the front man of The Dead Daisies. His favourite song to play live off the new album is “Resurrected.” Lyrically, it’s a personal song for John Corabi, which explores his life post- Mötley Crüe.

“The response we’ve been getting from the audience for all the tunes has been amazing. Lyrically, for me, having just told you that story about Mötley Crüe, the one song that means the most to me would be “Resurrected.” A lot of people wrote me off when I lost the Mötley Crüe gig. I think they looked at me as a guy who blew it, who had his chance and blew it. I’ve been here the whole time. I’ve done the acoustic thing, I’ve played guitar with Ratt. I’ve been able to maintain and take care of my family and myself, and continue to make music and travel the world, and do my thing. Right now, The Dead Daisies are garnishing a lot of attention. The lyrics to “Resurrected” are my way of saying that I’m not going anywhere. I’m here, I’m feeling resurrected right now, I’ve been here the whole time, and I’m not going anywhere. That’s probably the one song that means the most to me at this point,” Corabi disclosed.

See The Dead Daisies at The Brass Monkey in Ottawa on Saturday, August 25th. Tickets are $40 and available online.

“It will be good to come back to Ottawa when there isn’t snow on the ground, that’s for sure. The last few times I was up there, it was like oh my god, it’s so cold! It’s going to be a lot of fun. I have a lot of buddies up there. I’m looking forward to coming back to Canada. I always have a great time when I’m up there. I’m really good friends with the guys in The Killer Dwarfs, Sass Jordan, these great Canadian artists. When we get up there, it’s usually a reunion. The fans want to come down and see a no frills, no bullshit rock and roll band. It’s going to be loud, sweaty, and a good time. Come to see us, and we’ll have a party, it’s going to be awesome,” Corabi concluded.