Interview with Rise Against headlining ’77 Montreal 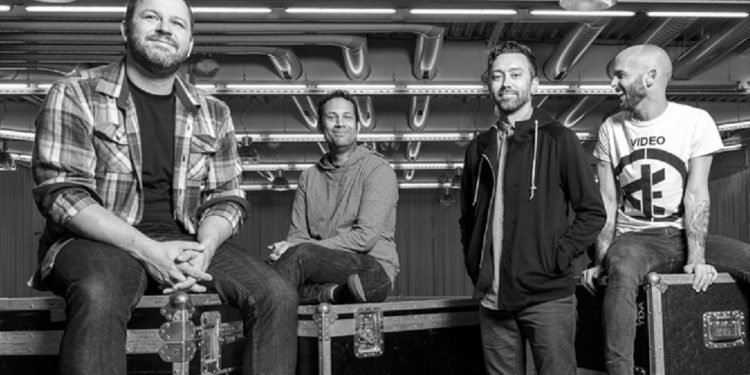 AFI and Anti-Flag, who are also playing ’77 Montreal, will be hitting the road with Rise Against on the Mourning in Amerika Tour this summer.

“We grew up playing with both Anti-Flag and AFI, we have opened for both of these bands at different points in our career. This tour is a long time coming and something that we’ve all talked about for years so in many ways it was just a matter of time. I know our fans enjoy both those bands and I think we have a lot of crossover fans in their world also. I have a tremendous amount of respect for the guys that make up both these bands, as people, as musicians, and as keepers of their legacies. I’ve always looked to these bands as carriers of the torch and as models for how to do it right,” McIlrath emphasized.

The title of the tour, Mourning In Amerika, is a play on a Ronald Reagan campaign slogan “It’s morning in America”.

“Mourning In Amerika is a song on our most recent album Wolves. It’s a play on Ronald Reagan’s campaign slogan at a time when he was robbing from the poor to give to the rich and selling to middle-America as a good thing using moral issues as a sugarcoated bitter pill. I felt like in 2018 it was a good time to resurrect this sentiment and put a Rise Against spin on it. I feel like it also serves as an umbrella that the three bands can fit under in our own ways,” McIlrath pointed out.

The 2017 album Wolves debuted at number nine on the Billboard 200 albums chart, becoming the fifth straight top ten record for Rise Against. Tim McIlrath and the rest of the band are humbled by the love and admiration Rise Against receives from fans all over the world.

“We are humbled by the love we encounter around the world for this band and these songs. In fact, we just released a photography book called Whereabouts Unknown with rock photographer Rob Fenn so people can see the global family they are a part of. More than music, I think we tapped into an appetite for songs with substance. I think the title track Wolves encapsulates this message,” McIlrath says.

Some of the songs off of Wolves reference Donald Trump, but the issues tackled on the album have existed in American culture long before Trump was ever elected. Similar sentiment inspired the Rock Against Bush compilation CD – an album Rise Against appeared on 15 years earlier.

“Donald is a symptom of the same disease that put Bush in office; an unchecked right-wing that not so politely hide racist, sexist and homophobic agendas in most of their policies. We need to point out that Donald is an expression of the worst of American culture, but we also need to realize the problem is bigger than him. Our songs on Wolves reference Donald for sure, but we also talk about something that has existed in American culture for a long time,” McIlrath added.

With Wolves, Rise Against created an album that inspires fans to rise up during dark times – to challenge politicians who use bigoted rhetoric, fear, and hate, and to tear down the walls that divide us as human beings.

Several weeks ago the music video “Megaphone” was posted on the Rise Against Youtube channel. The song is from a 7-inch record titled that came out earlier this summer. The song is about amplifying your voice, and the imagery from the video depicts vandalism.

“Our video for Megaphone was done illegally by the art activist group Indecline. We couldn’t even convince our label to pay for it for legal reasons. What you are watching is intent-laced vandalism on the highest plane. The song is about not just using your voice but amplifying it. We released this song and another B-side called “Broadcast[Signal]Frequency” on a seven inch this summer and you can find it streaming as well,” McIlrath said.

On July 27th, the same date Rise Against headline ’77 Montreal, the band will also be releasing The Ghost Note Symphonies, Vol. 1.  It’s an album with acoustic tracks and alternative instrumentation of other songs. It was recorded at the Blasting Room and produced by Bill Stevenson, Jason Livermore, Andrew Berlin, and Chris Beeble.

“Acoustic songs are something that I’ve done with the band since I recorded “Swing Life Away” during the Revolutions Per Minute sessions at the Blasting Room. We went on to do “Roadside”, “Hero of War”, “People Live Here” and a number of live variations.  Acoustic songs became part of our live repertoire and a part of the DNA or our band and our fans have asked us for something like this for years. We had time in our schedule and encouragement from the label, so we stumbled into the studio last January to see what we could pull off,” McIlrath recalls.

“It was a lot of groping around in the dark, it started as just a few songs from Wolves, and snowballed into 10 songs spanning our whole career. I spent 12 days with our tireless producers (Bill Stevenson, Jason Livermore, Andrew Berlin and Chris Beeble) working 12+ hour days to make this happen. Combined with a great string section, ukulele, piano and some collaborative spirit, we pulled off a really cool haunting album and brought some of these songs back to life,” McIlrath reminisced.

Six of the last seven albums Rise Against recorded were done at The Blasting Room.

“Bill and Jason and Andrew and Chris at The Blasting Room have been a huge part of the Rise Against story for close to 18 years. Their role in our band cannot be overstated. The Blasting Room is a second home for us, and we’re lucky to work with legends,” McIlrath replied.

Rise Against has had a lot of success in Canada, including four certified platinum albums here. The band is looking forward to returning to Quebec to play ’77 Montreal.

“I collaborated with Sick Of It All for a song on their new record so I can’t wait to see those guys. What a great fest, our first tour of Quebec was Snojam with bands like Sick Of It All, AFI, and Planet Smashers so this really is a full circle. To be playing with legends like Suicidal (Tendencies) and DOA and great bands like Iron Chic and The Interrupters and so many others will be a lot of fun and a great way to kick off the Mourning In Amerika tour, as this fest is day one,” McIlrath concluded.

Also playing ’77 Montreal on Friday, July 27th at Parc Jean-Drapeau is AFI, Anti-Flag, Suicidal Tendencies, Me First and the Gimme Gimmes, Steve Ignorant of Crass, The Interrupters, Sick Of It All, L7, D.O.A., The Rezillos, Planet Smashers, Jeff Rosenstock, No Policy, Iron Chic, and more. Tickets for the festival are $70.