Another busy weekend… and who says nothing happens in Cornwall?

by Mai-Liis Renaud
in Community, News and Announcements
3 min read
0 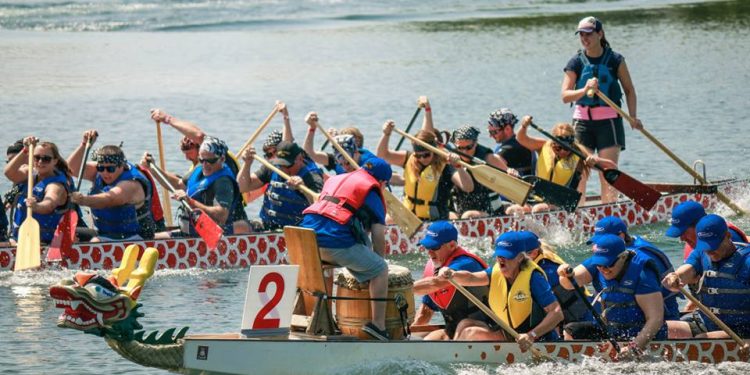 Cornwalll, Ontairo – Cornwall Waterfest Dragon Boat Festival was held at the historic canal at Power Dam Drive and Second Street West, on Saturday August 11th and what a great event it was with hundreds of people watching the 21 teams competing. An impressive amount compared to last year’s 8 teams. There was also entertainment on the Waterfest Stage, vendors, (including food and local artists) and demonstrations (including hand drumming), throughout the day.

Standing and watching beside someone who had been in one of the boats before was a bonus as the knowledge of how difficult this sport is really made a difference in how the event was viewed this year. The techniques and synchronization of the paddlers was amazing and the teams came together from all over Ontario. It was a full day of racing, starting at 9:30 am and ending around 4:30 pm with an award ceremony.

A lot of hard work goes into organizing such an event and thanks to the organizers, volunteers and sponsors, not only was it a beautiful day (weather-wise) but as the quote on their website says “Cornwall Waterfest presents an opportunity to have some fun and build new friendships while supporting a great cause and making a difference in our community”, this year’s event certainly fulfilled it’s description and also helped to raise funds for Waterfest’s partner charity, Cornwall Hospice.

For more information about this event and how to join next year wether it be to paddle, as entertainment, a food or arts vendor or to volunteer please visit www.cornwallwaterfest.ca

A second fundraising event for Hospice took place not far from Waterfest. The Motorcycle Club – Seaway Valley Riders – hosted their first ever “Ride for Hospice” which saw over 80 riders coming together. Starting and finishing at St. Lawrence Blvd Pub on Second Street West, they traveled 75 kms during the day with stops in Alexandria and St-Albert Cheese.

Brenda Aroz and her husband Frank too part in the ride and said “Yesterday Frank and I participated in our very first bike run for charity. It was so amazing, there were almost 100 bikes and a couple of cars. It was put on by the Seaway Valley Riders and it was so well organized. Money was being raised for the Hospice Cornwall. We will certainly be participating again.” The photo below was submitted by Brenda. The group “Seaway Valley Riders” started a couple of years ago and to date has 31 members.

For more information, you can visit them on Facebook.

Dan Drouin is the mastermind behind the Cornwall BMX track and 137 riders, from the ages of 2 to 50 attended the event on Saturday to compete for a spot at the Ontario Provincial competition.

On Sunday the event continued with a double point race that raised money for the Leukemia and Lymphoma Society of Canada.

Bernadette Clement, one of our Mayoral candidates attended this event and stated “I was so impressed by the dedication and tireless work of the organizers. Multiple members of families race (including parents!) and participate…Dan Drouin tells me that races require about dozen volunteers so the more the merrier!” The photo above was submitted by Bernadette.

It was definitely a fun day with the Cornwall BMX Club in Guindon Park.

Sanctioned races are held every Monday night and practices every Wednesday. For more information about the club call Dan at 613-930-3168 or visit: cornwallbmx.ca