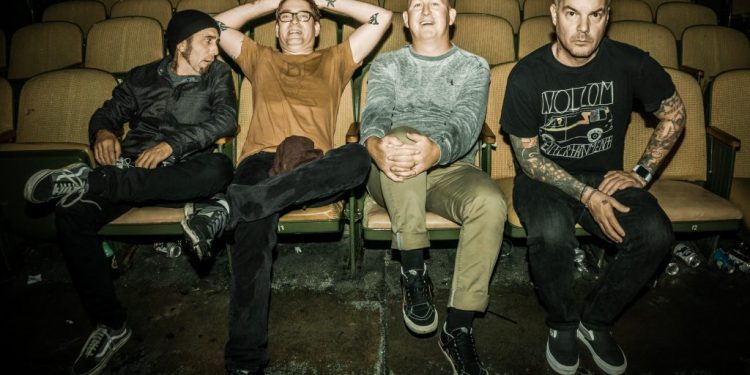 In 2007, Good Riddance went on a long hiatus. However, they reformed in 2012. Two of the key reasons the band reunited was because they missed playing the music, and they missed connecting with their fans across the globe.

“I think it was several things – time away had given us some perspective on what the band meant to us, all of our personal and professional lives had gotten to a point where we could actually take some time for the band again, and we also missed the songs, and connecting with our fans around the world,” lead singer Russ Rankin explained.

The single “Dry Season” shows that the band is still in top form, and the music video for that song has been viewed nearly a quarter million times on Youtube.

The album Peace in Our Time was recorded by Bill Stevenson at Motor Studios, and mixed and mastered by Jason Livermore at The Blasting Room.  It was a fantastic feeling for the band to be back in the studio recording again.

“It was refreshing to be creating new Good Riddance music again, and, of course, we all love working with Bill, and feel like he has a knack for getting the best out of us,” Rankin said.

In 2015, calling the album Peace in Our Time was a bit hyperbolic, but compared to the Bush regime, many people had hope and optimism. Just a few years later, the title seems especially ironic.

“The title is ironic, considering current events, but I think you could say that about the majority of what we have been singing about since 1995,” Rankin stated.

Will Good Riddance record and release a follow-up album?

“We are fortunate to be able to do things on a much more relaxed schedule these days. That being said, we are talking about new music, and I’m sure we will start kicking some new ideas around soon,” Rankin replied.

On the activism front, Good Riddance are a band who support various causes and like to give back. For example, some of their album sales are donated to various charities and non-profit groups.  Russ Rankin tells us about some of his favourite groups and organizations.

“Truthdig, Democracy Now!, Common Dreams, and PETA. We believe social and political activism, on a personal, everyday, grassroots level, is more vital now than ever before. One small positive of the 2016 general election has been the uptick in interest in the machinery of American politics. Town hall meetings are packed with thousands of people who never bothered to attend before, and millions of us are reaching out to our representatives for the first time,” Rankin said.

“I love it when the people are singing along with us, so all of our songs with big singalongs are my favorite. I like “Mother Superior” a lot, just because I thinks it’s lyrically effective, and musically I believe it showcases the quintessential Good Riddance sound and style,” Rankin added.

The tune “Mother Superior” also appeared on the Survival Of The Fattest compilation record put out by Fat Wreck Chords in 1996. The album featured songs from Nofx, Lagwagon, Propagandhi, Me First and the Gimme Gimmes, and more.

It’s probably no surprise that Good Riddance were also on the Fat Wreck Chords compilation Liberation: Songs to Benefit PETA along with bands like Anti-Flag, Good Charlotte, and Goldfinger.

Members of Good Riddance are looking forward to the upcoming show September 15th at the Hard Luck Bar in Toronto with Brutal Youth, A Vulture Wake, and Pseudo

“Toronto has treated us like family from our very first time playing there in 1995. Shows in that city feel like hometown shows for us, and we always have an incredible time. We have heard a lot of positive things about Brutal Youth, and our drummer plays in A Vulture Wake, so we know those guys pretty well,” Rankin concluded.