by nathan
in News and Announcements
Reading Time: 2 mins read
37 1 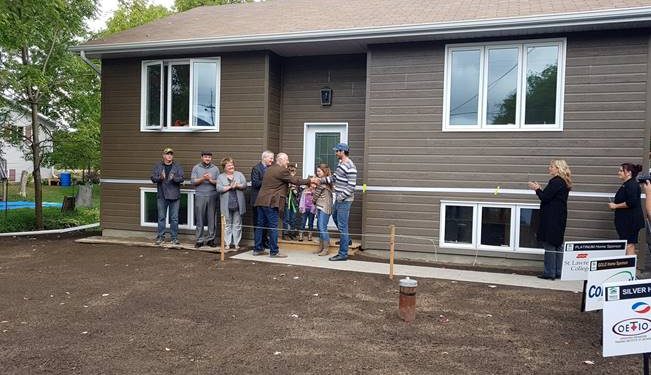 Cornwall, ON, October 2, 2018: On Saturday, September 29th at 11am, Habitat Cornwall, along with more than 50 community members, helped to welcome the Pinard family into their new home in Williamsburg. Since the groundbreaking on April 30th, the Pinards, the community and Habitat Cornwall have worked together to build this safe, affordable, new home. The Pinards have successfully completed over 500 hours of sweat equity in place of a financial down payment for this home.

In addition to handing over the keys and cutting the ribbon for the home, Habitat Cornwall also took the opportunity to publicly thank the 35 sponsors and many volunteers who have made this home build possible.

This is the 13th home build that has been completed in Stormont, Dundas, Glengarry and Cornwall.

New homeowner, Sarah Pinard, brought tears to many eyes as she remarked on her family’s journey: “We are thankful for Habitat, for all of the people that contributed. There were times in our life that we were homeless. We may not have done this traditionally, but we were able to do it with a helping hand from Habitat. It’s possible for other family’s to change their lives as well.”

About Habitat for Humanity Cornwall & The Counties:

Habitat for Humanity Cornwall & The Counties does not receive annual government funding. They rely on the support of the community to help the community through donations, fundraising, third party events, partnerships, and sponsorships.

13 local families with 31 children have had an opportunity to change their lives because of local supporters.

The ReStore is stocked entirely through donations, meaning customers do not have to pay tax. ReStore revenue assists to offset day to day operational costs and contributes to home builds.