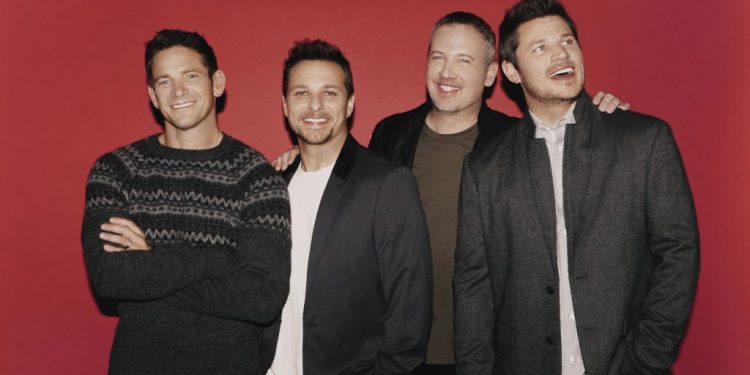 Winnipeg, Manitoba – It’s going to feel like a balmy 98° this holiday season when legendary boy band 98° kickoff their 2018 Christmas Tour on Thursday, November 1st in Winnipeg, Manitoba. It’s the first of four Canadian stops on the 98° tour.

98° is a Grammy-nominated pop group that sold over 10 million albums between 1997 and 2002 and dominated the Billboard charts. They have had numerous chart-topping singles including “Thank God I Found You” with Mariah Carey and Joe. They also collaborated with Stevie Wonder on the song “True to Your Heart,” that appeared in the Disney film Mulan.

Last year 98° released the album “Let it Snow” which is a sequel to their classic holiday record “This Christmas” which came out in 1999.

“For us, our first Christmas album was one of our most successful albums. Fortunately, we had a few that did well, and that one was a really big hit for us. We enjoy being back on the road together, and we didn’t think we were going to have this much fun doing it. The fans are there for us. The music industry has changed, and it takes an incredible amount of promotion to release a traditional studio album, including two- or three-years promoting singles and doing radio shows. We don’t have the time to do that anymore, we have families, and other things we do in our careers. With a Christmas album, we still have to get into a studio and record, but a holiday album is pretty self-explanatory. We can use the tour as a promotion for the album, and the album will hopefully be a classic hit for us. That was the reason behind doing the Christmas album. We hope to do a Christmas tour every year. We don’t have to do a traditional studio album,” 98° founding member Jeff Timmons explained.

With 98° Jeff Timmons has spent a lot of time touring. The greatest Christmas gift he cherishes as a father is spending time with his family, especially during the holiday season. That’s why the tour ends a few days before Christmas.

“Growing up my parents always made sure Christmas time was amazing, and my wife and I try to do that for our children. The past couple of years we’re home just in time for Christmas, and it makes us enjoy those moments even more. I spent a large amount of my adult life on tour. The meaning of Christmas is spending time with your loved ones, and we cherish that having been on the road for so long, after so many years away from our families. I think we cherish every moment with them, and the holidays make it even more special,” Timmons noted.

Last year 98° released a music video for the song “Season of Love.” Before the song starts there is a skit featuring Joey Fatone of N’Sync as the director. A member of 98° talking to Fatone wants to make sure it doesn’t look like an N’Sync video. The statement is a joke and not meant as shade.

“It’s not shade. We love those guys. There is this misconception about the guys who are in boy bands, that they’re in a competition or rivalry. Even when we were out our first time together, we toured a lot with N’Sync overseas; we toured with Backstreet Boys in the United States. There is mutual respect for those guys, not only for their talent but for their work ethic. We admired their talent and admired them as people. Joey Fatone is known for being a clown and has a big personality. He’s been a friend of ours for a long time. We share a lot of the same fans. We sometimes take jabs at each other but in a fun and jestful way,” Timmons answered.

“In regards to the video, MTV doesn’t play videos anymore; you have to go to Youtube to watch them. We thought we’d do something fun and silly. Back in the day people thought we were a very serious group of guys, and they didn’t know we’re kind of jokers and light-hearted. We thought it would be funny to get Joey (Fatone) in there and have some fun with N’Sync,” Timmons added.

98° is not a stereotypical boy band. They write most of their material, they are R&B influenced, and they also sing in a cappella.

“I like that you recognize that. I think from a snapshot view; people automatically assume that a group has been put together because of their looks or their style. The last thing people think about is their talent. That’s not the case with our group. Although N’Sync and Backstreet Boys were quasi-put together, I know N’Sync put themselves together more than they are given credit. I still think they are tremendous performers, they can sing live, they can dance, and they have great charisma on stage. In regards to us, we modeled ourselves after Boys II Men. They were never considered a boy band until recently. The term boy band has the stigma of you’re selected because of your looks, and your appeal to a younger female demographic. For us, we just wanted to sing songs”.

“We have musical backgrounds, the other three in the band have gone to school in the performing arts, and are very cultured when it comes to music, bands, acting, and things of that nature. We modeled ourselves after Boys II Men. They sang a cappella; they sang four, five, six-part harmonies on the records – sometimes more.  They were R&B influenced like we were. We are also influenced by The Temptations, Four Seasons; rock groups with tremendous vocal chamber arrangements like The Eagles, Boston, and Journey. We were influenced by rock too, believe it or not, bands like Metallica”.

“At first, we didn’t like that term boy band, and we didn’t hear it until we started touring around Europe where there was a plethora of these (put together) groups with unique looks and strategic marketing, and they would lip sync on television shows. We didn’t like the term at first until we were associated with world-renowned acts like Backstreet Boys and N’sync and spoken with them in the same breath – getting to tour the world and selling out our concerts – then the term wasn’t so bad. When people dived a little bit deeper into our background and started to do some research about our R&B flavor and our Motown influences, they’ll get an understanding of what kinds of musicians we are. If not, we’re not mad. We’re getting adulation from tons of bands and getting to tour the world were positives,” Timmons elaborated.

The day before the 9/11 terrorist attacks 98° played the Michael Jackson’s 30th Anniversary Celebration at a sold out Madison Square Gardens in New York City. The show would be their final performance for a very long time. Now that 98° is back together they can bring joy and nostalgia to their audience – a reminder of a simpler time before the world changed so drastically.

“That’s a fantastic question. I think you bringing that up is very poignant in the fact that particular show was the last time we performed together for many years. It was a sign of the times, and a sign of change. The world was completely different after that day, it was for our careers, and it was for many of our young fans that are now adults and struggling with life now. It’s not easy for anyone out there. Times are turbulent, there is a lot of dissension, a lot of polarization, especially in our country and all throughout the world. I think that is the main reason we are having so much success right now since we reunited. We’re going out there, and fans are coming out in droves. I think they attach themselves to a time that was a little more honest, a little more sincere, they had less pressure, and it was a different time. The climate of the world wasn’t as dynamic before 9/11 in regards to all the drama and hardships that have come after that day. I think it’s a time people can escape, and remember their youth. It was a good time in their lives and a more innocent time. We’ve been blessed to perform some great songs that have been quasi-classics, but I think it’s more our fans attaching us to a simpler time and more enjoyable time in their lives,” Timmons reflected.

Right now 98° are focusing on their Christmas tour. For the time being there are no plans for a new 98° album; however, the band might test a new single in the future and go from there.

“As music changes, the way you engage fans and put the music out there changes too. It’s evolved into streaming, and it’s single(s) driven, and EP’s instead of full-length albums. I think we have a more in-depth grasp and understanding of how we can reach our fans. I think we’re a little bit intimidated by how the industry has changed between our hiatus and now. But now we know that the fans are there. We did Epcot (Disney) for six nights, and it was standing room only the whole time. We were surprised and pleased with the turnout. We know the fans are there, we know they’ll embrace us. We don’t have to do things the old model and paradigm where you spend a million dollars on an album, and you go on the road for two years. I think it’s in the cards, and we’ll consider doing a song and see how that goes, and if we get the reaction we want, maybe we’ll do an EP or another full-length album. I like the fact there aren’t rules anymore, and you can utilize tools like social media and the viral capability of the fans base to be able to do what you love, and that’s to create music,” Timmons replied.

Things are going to heat up in Canada just before Christmas with the start of the 98° holiday tour.

“What a lot of people don’t know is that we broke in Canada first. After our first single, we didn’t break in the United States. People didn’t know who we were because our pictures and images weren’t in the media or on MTV yet, and the label didn’t quite have an understanding of how to promote us just yet. We brought our Winnebago wrapped in photos of us to Backstreet Boys concerts and handed out swag. Canada was the first place to embrace us, then South East Asia, then the United States. We have an infinity for Canada. We love the fans there and hope to do a national tour there sometime soon, not just the four shows that are kicking off the Christmas Tour. We want to express our appreciation and admiration for their loyalty throughout the years,” Timmons concluded.

For more information on tour dates and to purchase tickets visit their website.

Haunted Backyards and Maze are back to haunt you this Halloween