OHA Trick or Treat for Agape Food Bank this Halloween 2018 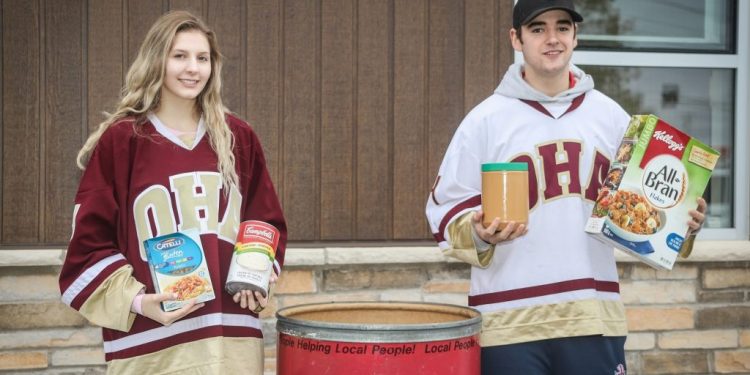 Cornwall Ontario — Once again, hockey players wearing the colours maroon, gold, and white will be knocking door to door canvassing neighborhoods on Halloween starting at 6 pm.

Students from the Ontario Hockey Academy, including Maia Cocciolo and William Kerlin pictured here, will be collecting non-perishable food for the Agape Centre this Wednesday, October 31st.

This is the eighth consecutive year students at the hockey high school participate in this wonderful community activity. There are approximately 140 students from over 20 different countries attending the local academy.

Student-athletes engaged in this activity will have the opportunity to volunteer and learn more about civic responsibility.

“It’s for a good cause, and it is the least we can do,” said William Kerlin. He is a Grade 12 honour roll student from Great Britain and a goalie for the U18 team at the Ontario Hockey Academy.

“This is my fourth year participating in this event. It’s something I look forward to doing every Halloween,” Maia Cocciolo added. She is a Grade 12 honour roll student, from British Columbia, and she plays right-winger on the Prep team.

Each year the Ontario Hockey Academy collects thousands of pounds of food during their Trick or Treat for the Agape food drive.

“The Agape Centre plays such an important role in providing support in the Cornwall community. We are truly happy that we can play a role in ensuring the center can continue to meet our city’s needs”, Principal Jesse Ferguson said.

“This year marks our 11th year of operation, and we wanted to commemorate the event by giving back to our community in a big way!” Ferguson added.