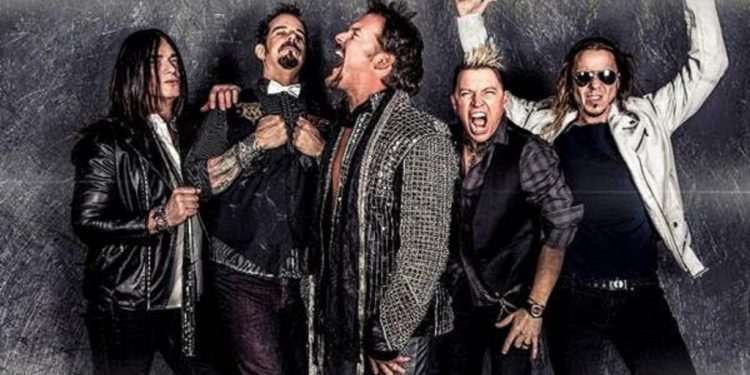 Arnprior, Ontario – Former WWE Champion Chris Jericho is on tour with his band Fozzy. They are playing a sold-out concert on November 26th at The John St. Pub in Arnprior, Ontario.

Last year the band released their album “Judas.” The single also titled “Judas” reached #1 on the Sirius/XM Octane charts. The song also has over 24 million views and counting on Youtube.

Fozzy has reached a new pinnacle of success because of that hit song.

“You can see how the band has grown. The song “Judas”, right out of the gate, became a huge hit. It had a million downloads the first week of its release. It was the right song, at the right place, at the right time. It elevated Fozzy to the next level, and we were ready for it. We had a lot of songs in the past that were great songs, but this was one that connected with people and became a career song for us. Songs like “You Shook Me All Night Long,” “Enter Sandman,” “Stairway to Heaven”, like how those songs are important to their bands, “Judas” is important to Fozzy. It opened the door to get us to the next level pretty much instantly. We can see how the band has grown in the last year and a half as to when the Judas Rising tour started and now as that tour cycle is coming to an end. It’s been a hugely successful tour for us spearheaded by that song,” Chris Jericho stated.

The song Judas is about betrayal, like how Judas betrayed Jesus in the Bible.

“Judas the song is about the betrayal of the mind, like what Judas did to Jesus, it’s about betraying yourself. It’s the Judas of the mind and making the wrong decision when you know it’s the wrong decision, but you do it anyways. That’s what the song deals with,” Chris Jericho explained.

When Chris Jericho first started in the WWE, his entrance theme song also referred to Judas, but that was a reference to Judas Priest.

“That’s funny, the Judas reference in the Walls of Jericho song, I didn’t even know what it was for years until somebody pointed it out to me. I think that was someone writing fun lyrics and referencing Judas Priest,” Chris Jericho recalled.

“As far as Judas Priest you can’t be in a rock and roll band and not have a little bit of Judas Priest influence on you. We play songs like “Breaking the Law” and “Freewheel Burning” to this day. But I think we have a very diverse list of influences besides Judas Priest, such as Iron Maiden, The Scorpions, Van Halen, and those types of bands. There is also a lot of 70’s yacht rock, and Hall & Oates, Kool & The Gang, The Doobie Brothers; and a lot of rock. We loved the days when everybody in the band sang, and everybody in the band was a killer musician. That’s what we built our foundation on. I’ve said if Journey and Metallica had a bastard child that might be what Fozzy’s sound is like,” Chris Jericho added.

Traditionally Chris Jericho writes the lyrics for Fozzy. For this album, he only wrote the lyrics for “Running with the Bulls,” “Three Days in Jail”, and “Wordsworth Way.” Producer Johnny Andrews wrote most of the lyrics including for the song “Painless”. Chris Jericho as a singer must read and internalize the lyrics and figure out how they relate to him so he can authentically sing them to the audience.

“In the past, I wrote the majority of Fozzy’s lyrics. For the Judas record, we were working with Johnny Andrews who produced the record. He had a lot of influence with the lyrics and wrote a lot of the lyrics including for Judas. What I have to do when given lyrics to sing is read them and internalize them and figure out how they relate to what I’m going through in life and how they relate to me.  I think that is the best way. You have to sell those lyrics as a singer to the world. That’s what I’ve been doing with this record. I wrote 3 of the songs of the 11. The biggest hits are all Johnny Andrews lyrics. There is a lot of deep stuff. Even though I didn’t write them, they are still autobiographical to me. These feelings of being depressed sometimes, or breaking up with someone, betraying yourself, or drinking with Jesus, sometimes getting loaded by yourself because no one wants to talk to you but the Lord. It’s something anyone can relate to, and that’s what makes them easier to sing to me,” Chris Jericho went on to say.

Chris Jericho was listed as #1 among Workaholics in Hard Rock and Metal according to Loudwire. Between WWE and Fozzy, Chris Jericho has a grueling schedule. He works hard for his success. Chris Jericho’s success in both wrestling and rock music is because he is goal-orientated. He knows what he wants to do, and he doesn’t allow other people’s negativity to stop him from achieving his goals. The word “can’t” is not in his vocabulary.

“I don’t know if it’s a good thing or a bad thing to be that. For me, I think it’s that I always wanted to be in a rock and roll band and wanted to be a wrestler when I was a kid. It’s what I built my whole career on. Once I was able to do both of those things at high levels, suddenly nothing is out of my reach. You become fearless. If I want to do a podcast, I’ll do it. If I want to write books, I’ll write them. If I want to act in a movie, I’ll do it. All these things are based around the fact I was told through my younger years that I’d never make it. You’ll never do this, or you’ll never do that. I never understood why people had such an interest in what I was or wasn’t doing. I just went and did it. I think that is one of the reasons I became successful is that I didn’t have any problem doing things people told me that I couldn’t do. I blew through the negativity of those people and focused on the positive things, and here I am all these years later,” Chris Jericho recalled.

Chris Jericho also has a smart business sense. He has built a nice synergy between wrestling and music. Both genres of entertainment share an overlapping fan base.

“Both are very energetic forms of entertainment. They are hard-hitting, aggressive, and they both make you forget your problems. A great wrestling show, and a great rock and roll show – you walk out with a smile on your face. That’s what we do as Fozzy. We make sure people have a good time at our shows. There is no politics or talking about the issues of the day. It’s just rock and roll, and we have a good time doing it. All those fans of Fozzy, we expect a lot from our fans, and we don’t have a problem giving it back to them. We leave everything on stage every night. We don’t have pyro going off or dragons flying through the ceiling. We are the show. There is a lot of energy, and a lot of electricity, and that all bleeds into the crowd and that energy comes back to us and it’s a great vibe and a great time for everyone there,” Chris Jericho said.

After the tour, Chris Jericho and Fozzy be going back to the studio to record new music and build on their momentum.

“When this tour wraps up we’ll have been on the road for 19 months. I think it’s time to go back to the studio and continue this great momentum we have got through the Judas record. The 3 top 15 singles and the radio play. We will continue to build upon that and go to the studio and create a record that’s just as good as Judas if not better.

As an artist and as an athlete Chris Jericho performs in front of tens of thousands of people frequently. The show at The John St. Pub in Arnprior will be much more intimate.

“We love it, whether it’s 10,000 at Madison Square Gardens or going to places like Arnprior and playing The John St. knowing it’s intimate. We love that. It’s going to be hot and sweaty, punk rock; it’s going to be a killer show. Sometimes when you put together a tour, you have a night off. We don’t like nights off, so book us somewhere. We can play Arnprior; I’ve never been to Arnprior – let’s go, let’s have a great show doing it. It’s called an underplay. You know you’re going to sell it out. We sold it out a few weeks ago. It’s going to be a great night, a lot of fun, and something people are not going to forget for a long time,” Chris Jericho noted.

For fans who missed out on buying a ticket for the Arnprior show, tickets are still available on November 25th at MTELUS in Montreal. Fozzy is opening four dates for Three Day Grace’s on The Outsider Tour.

“It’s great. We’re doing four shows in Canada on The Outsider Tour. We’d love to do the full tour, but sometimes it doesn’t work that way. We’ll be back doing our own tour headlining. We love Three Days Grace; they are a great band to go on tour with. It’s a lot of fun. We’ll be playing some big rooms, making new fans, and playing to a lot of our own fans. The guys in Three Days Grace are very cool. It’s a rock show and whether you’re playing Arnprior at The John St. or whether you’re playing Montreal at the Telus Centre. It’s going to be a great time, and we’re going to make sure the people have fun,” Chris Jericho added.

“We’ll play a sold-out show any night of the week. For those who didn’t get tickets, sorry, next time you’ll have to be quicker. It’s a sellout, and it’s going to be a great time of rock and roll. We look forward to seeing you there,” Chris Jericho concluded.

Primitive Reflexes and How it can Impact Attention and Learning