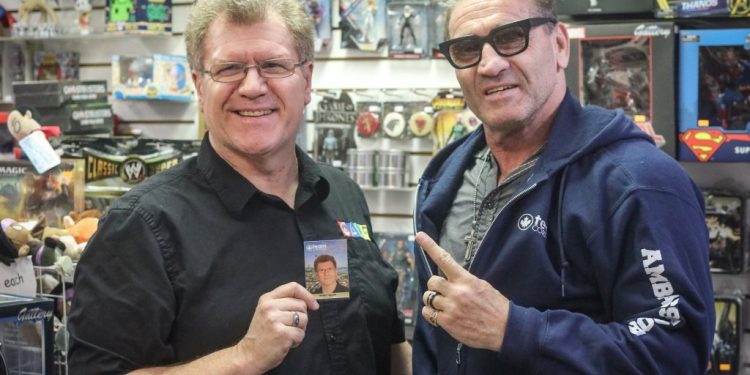 “When it first happened that’s when we were going through the issues of people disagreeing with the MMA events and who did not want it to happen saying that it was too violent. There was this false perception that we were all mass murders, and we just came out of prison. No one knew who we were, and they weren’t used to these types of fights,” Ken Shamrock explained.

“When they came out with the ABC special, I was afraid of them doing a piece on me; I was afraid it would come out negative. I had three kids in grade school at that time, and the last thing I wanted to do was embarrass my family. I questioned them on what they were doing. I was pleasantly surprised that they were showing all of us in this event, me especially, that we were no different than anybody else in the world, but we were entering a ring and having a fight. My world was no different than the rest of the people’s world outside of their job. I was a family man, I was a husband, I was a father, so it humanized me. Therefore, it gave the UFC an opportunity to look at us as people competing in the ring and not this mystic thing where we all came out from the gutter or the prison out after killing people,” Ken Shamrock went on.

In the octagon, Ken Shamrock is known as a grappler. His speed, agility, explosive power, and physical strength are all assets that make him successful at mixed martial arts. However, it is his cardio that sets him apart from other athletes his size.

“I think it’s a combination. Number one is knowledge of submissions, knowing the in’s and out’s of how to defend yourself, and the knowledge to know all the different fighting disciplines. With time that is where I was able to educate myself. The thing that gave me an advantage was not only being big and strong but having the cardio to go with it. That was rare for someone to be as big as I was and being able to fight for 36 minutes without getting tired. In fact, being in better shape than someone who was thinner and looked like they could go a longer distance like Royce Gracie. By that 36 minutes, I was fresh, and he was tired. That was a rarity. That was my strength. Being as big as I was, and strong, but still have that cardio to go the long distance,” Ken Shamrock replied.

A year after going the distance with Royce Gracie, Ken Shamrock became UFC Superfight Champion defeating Dan Severn at UFC 6. With the victory, he became the top mixed martial artist of the world at that time.

“That was the change of the guard when you talk about the way the UFC was put together. It was about four guys on one side of the bracket, and four guys on the other side of the bracket, and they would all fight to compete for a championship at the end. You never really got the two best guys in the finals. For example, someone would get hurt and break a hand, and you’d never get the best guys in there. So, the single fight came out due to the negativity that Royce and I could never get together. He was on one side of the bracket, and I was on the other. The only time we ever met was at the beginning of it. Otherwise, someone got hurt, dropped out, and it didn’t happen. So, they said let’s do this, lets put a single fight together and have those two guys fight because that is what people want to see. That was really the birth of the UFC Superfight Championship rounds,” Ken Shamrock recalled.

After a career worthy of later inducting Ken Shamrock to the UFC Hall of Fame, he made the jump to WWE (known as WWF back then).

“I remember Bob Meyrowitz and I once had a conversation about me being paid what I deserved. He was all on board for that. He said next year when the UFC starts reaching that next level we will pay you what you’re worth. They did get to the next level, but UFC also seemed to take a step backward, because every place they went they were always in court trying to defend themselves to have the show. That cost a lot of money, so a lot of that money was eaten up in legal fees. We came together, and he said listen I can’t pay you what I told you I could pay you,” Ken Shamrock recalled.

“I’ve always said this; if I can’t support my family with what I love doing, I must walk away from what I love doing and do something else. I couldn’t pay all my bills. I couldn’t pay for the gym I set up for the fighters, the fighters house, my family, the schooling I put my family through, and I group home I had for kids. I’m going to keep all these other things going, I’m going to help these people achieve their dreams, but I’m going to do something else to keep this going. That’s why I made that decision because I couldn’t make the money I need to make to continue in MMA and do the things we were doing. I decided to do something else, not knowing at the time it would be pro wrestling, but it ended up being pro wrestling – thank God,” Ken Shamrock added.

In the WWE, Ken Shamrock won the Intercontinental Championship. He also had feuds with top stars including Dwayne The Rock Johnson. He also fought the Rock at the 1998 Royal Rumble, and later at Wrestlemania 14 where he made the most electrifying man in sports entertainment submit with the ankle lock.

“The Rock was very professional; the guy was good on the mic, a great athlete, really good in the ring, and easy to work with. For me, it was a great rivalry. We had that rivalry for almost a year and a half. I thought we had a rivalry equal to the best runs for that Intercontinental title. We had some of the best matches,” Ken Shamrock reminisced.

Ken Shamrock was happy to meet fans in Cornwall, Ontario at Fantasy Realm much like Mick Foley was earlier this month.

“What an honour. I’m living a dream. I know a lot of people look at things differently. I get to travel around the world and meet and greet. What that means is meeting the fans, greeting the fans, signing autographs, talking with them, hearing some of their stories of how I made their lives so inspirational. For me, I’m living a dream meeting all of them and enjoying this time. This is important to me. I don’t do this because I’m killing time and trying to make money. Trust me; it’s not about the money. It’s about getting out here, having fun, and meeting people who supported me over the years,” Ken Shamrock concluded.

Later this month Ken Shamrock will have his first wrestling match in almost a decade. He will be in action at Battle Championship Wrestling 25 on November 30th in Melbourne, Australia.