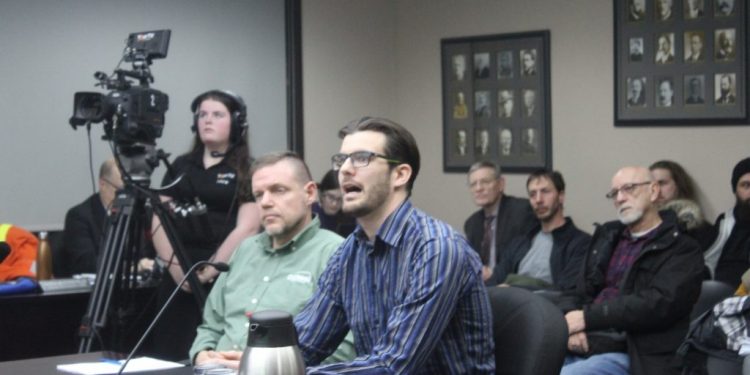 Photo caption: Alain D’Aoust, on behalf of the Social Development Council, together with Scott Porter, the City’s Parks and Recreation Manager, gave an eloquent presentation on edible landscapes, supported by a series of informative and visually attractive slides.

Seeker Coverage of the City Council Meetings by Neil Macmillan

The big news from the Cornwall City Council meeting of January 14, was the likelihood of new recycling and curbside garbage procedures as of April 1.

Following a request for proposals (RFP), it is almost certain that Cornwall will be awarding a $24-million, seven-year contract to a new garbage pickup company: Environmental 360 Solutions from Pickering Ontario. This will naturally mean that most employees of the current garbage contractor, HGC Management Inc. will lose their jobs. Around a dozen of these employees were very visible at the back of the Council Chambers, sporting their yellow security vests.

Partly because of this concern, some Council members were not comfortable with approving the awarding of the new contract right away because they felt they needed more time to study the related report from City officials. After vigorous discussion, a majority of Council members agreed to defer the decision to the next Council meeting in two weeks.

In other proceedings, Cornwall City Council:

Cornwall City Council appears to be functioning well under new Mayor Bernadette Clement, although she indicated once or twice during the meeting that she was – literally – finding the weight of the chain of office too heavy!