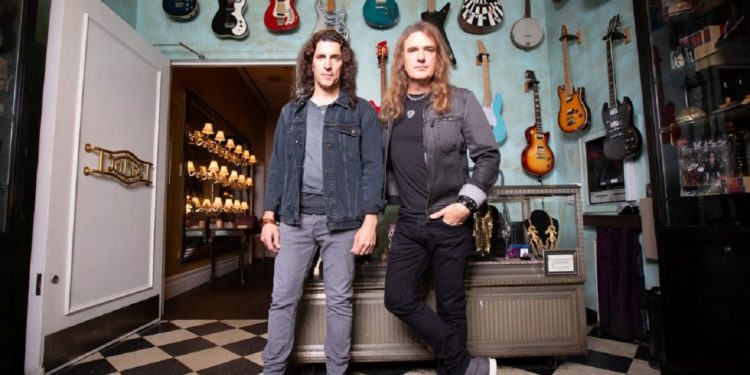 Frank Bello who started playing with Anthrax in 1984, and David Ellefson who has been playing with Megadeth since 1983 have known each other for a very long time. However, in recent years they have become close friends. They were on tour together for “The Big Four” featuring Metallica, Slayer, Megadeth, and Anthrax – the four biggest bands in thrash metal history. They also ran successful bass clinics together.

“We knew each other from the early days. It’s sort of like going to high school and coming up the ranks of this metal thing we all know and love. Seeing each other at shows, and playing shows together. I think Dave and I became closer. During our touring life on the road, nobody is around, that’s what happens when you get to a place you want to be. It wasn’t until the big four stuff that happened that Dave and I built a really tight friendship, got closer, and had some fun with our clinics,” Frank Bello recalled.

It was while doing bass clinics that Frank Bello and David Ellefson decided to write and record new music. This is how Altitudes & Attitude was born.

“We were hanging out so much, and doing these bass clinics for the amp manufacturer Hartke, and funny enough, you’re always looking to show the crowd different stuff. Dave comes up to me one day and says we should write some music that we could play at these clinics so we have something different to offer. That happened, and it was a snowball effect, we started writing together, and it really clicked. When we started listening to the songs we were coming up with, we said these have to be recorded. We thought they were really strong songs. After that, we recorded some demos, gave them to Jay Ruston, it snowballed from there, and that’s the nucleus of the whole thing,” Frank Bello added.

Producer Jay Ruston, who has previously worked with Anthrax, was the perfect fit for Altitudes & Attitude.

“He’s a bass player, he understands where we were coming from. We had this music inside of us that we had to get out, hence the title “Get It Out”. It was one of those things where it all clicked. I trust Jay, I’ve worked with him before. He’s like the fifth Beatle! Jay knows where you want to go before you say it to him. It’s a close friendship and I trust him, he trusts me, and it works. I introduced Dave to him and it all clicked really well. It was such an easy vibe, it was a great process,” Frank Bello said.

“It was easy, I just wanted to play guitar, and I wrote a lot of the songs on guitar in my living room. At home, I play guitar a lot and sing and that’s how I write songs for the most part. I knew the parts already, so it was easy enough to go right in the studio and play the songs I played in my house. Going to the studio was an easy process. David Ellefson has played some of my favorite bass that I’ve heard. It’s so much stuff that I haven’t heard him do, and that’s what he did on the Altitudes & Attitude record for bass. It was like an open canvass, and David did some really incredible work on it. Whether it was an 8-string bass, 4-string bass, 5-string bass, all great stuff. I’ve played some bass, I played one 8-string song, but David played parts and took over and it was awesome. He’s a great bass player,” Frank Bello explained.

The title of the album “Get It Out” can also refer to the lyrics that Frank Bello needed to get out. The lyrics are about some of Frank Bello’s inner struggles and deep seeded emotions. Writing these lyrics was a cathartic experience for the Anthrax bassist.

“This is about years of holding a lot of stuff in and getting it out. These songs needed to get out, and lyrically it’s about my growing up. Everybody has hardships in their life, and these are my hardships. When growing up, my dad took off, and my brother was unfortunately murdered. A lot of that stuff builds up inside of you, so I found it very freeing to write about it and be honest about it. This is a way for me to cope with it, it’s like therapy on paper for me,” Frank Bello reflected.

“Lyrically a song like “Out here” is about abandonment. It felt good getting it out of me. Whoever was abandoned in their life, I think could relate to this song in some way. My personal thing was my dad leaving my family when we were very young. He just took off. I always feel bad and understand people who were abandoned. I am one. As a ten-year-old kid with four younger siblings we were abandoned and left with our mom alone – but thank god for my mom. It’s something I had to talk about and I hope people can connect with it. It’s a strong feeling that I have, and you can rise above it,” Frank Bello disclosed.

The drummer on this album for Altitudes & Attitude is Jeff Friedl of A Perfect Circle. He’s also drummed with Devo and Filter.

“I think our producer Jay Ruston knows everybody, pretty much. He introduced us to Jeff, and of course, we knew Jeff’s work and think he’s great. As soon as Jeff heard the idea he said yes immediately without even hearing it. The great thing is when Jeff comes in and does his drum parts, you don’t have to say anything, he just knows what to do. That’s the great thing about this whole Altitudes & Attitude project. Everybody just came in and did their part to the tenth degree. Jeff Friedl comes in and imagines parts I would never think of, and that was incredible. I kept shaking my head thinking wow! He’s such a great drummer and I appreciate his performance on the record,” Frank Bello explained.

The new Altitudes & Attitude record also has notable guest musicians including KISS guitarist Ace Frehley who plays on the single “Late”. Despite Frank Bello’s success as one of the top metal bassists in the world and the success of Anthrax as one of the top metal bands of the 1980s and beyond, Frank Bello has a humble attitude. This is demonstrated by his excitement and joy to work with one of his childhood idols on this album.

“For Dave and I, as hardcore KISS fans from way back, to have Ace Frehley on a song, wow! If you told me when I was 15 that Ace Frehley would be playing lead on a song that I wrote I would never have believed it, I would have said you’re out of your mind. This is one of those wow moments for me in my life. It’s a quintessential great lead that Ace does, and to have Ace on it is very special. Dave played some charity event with Ace and spoke to him about it and said “do you want to play on our record”, and he said sure send it over, and we did. His manager John got involved and helped us out getting it all done, and it worked out great. I couldn’t be happier, I love it,” Frank Bello revealed.

“In February we’re going to be playing with Slash. Our plan is to see what happens. Dave and I have busy schedules; we have day jobs called Megadeth and Anthrax. Those come first. Whenever we have time, we’ll try to squeeze some shows or a tour. I hope we can, we’d really like to,” Frank Bello stated.

Fans can check out the new Altitudes & Attitude single titled “Part of Me” which came out Thursday.

For more information about the band check out their website.

In regards to Anthrax, can fans expect a follow up the 2016 release of “For All Kings”?

“Yes, but that’s down the line. We’re in the cocoon of writing”, Frank Bello concluded.

Reasons Why You Should Buy an Unlocked Phone