Interview with Shane Koyczan performing in Ottawa on January 30th 2019 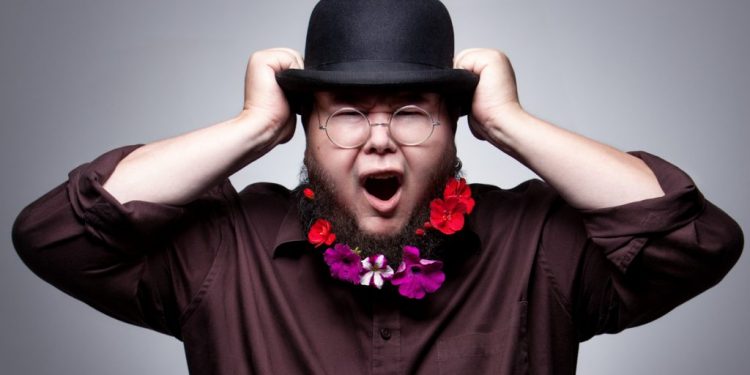 His book Visiting Hours was an early indication of his talent. It was included in the 2005 Best Books of the Year list for the Globe and Mail newspaper in Canada and the Guardian newspaper in the United Kingdom.

In 2010, Shane Koyczan hit the world stage when he performed at the opening ceremony of the Winter Olympics in Vancouver, British Columbia. His piece “We Are More” skillfully articulates what it means to be Canadian.

“The Olympics was an interesting experience that would take too long to sum up here though. A lot happened”, Shane Koyczan said.

He has also been featured on an episode of the documentary series Heart of a Poet which was broadcasted on the Bravo television network.

However, Shane Koyczan might be best known for his anti-bullying piece “To This Day” which has over 23 million views on Youtube. The start of his story uses humour to hook the audience, and then he makes some profound and perspicacious statements about the topic that are very moving.

“I try not to read online comments, but I read the letters that get sent through social platforms or through the post. I don’t think I had any real expectations. I just wanted to share so again people wouldn’t feel alone in their experience. There’s a measure of comfort in knowing you aren’t the only one”, Shane Koyczan acknowledged.

There is more support for students now than a generation ago, and that gives Shane Koyczan some hope.

“Compared to the time I went through school when we had no assemblies to talk about it or support groups for students going through it, I think we’ve come a long way. We aren’t all the way there, but people aren’t going to stop talking about it either, and that gives me some hope”, Shane Koyczan continued.

In his poems and spoken word, Shane Koyczan delivers clever rhymes and carefully crafted rhythms. The editing process is vital to shaping his work.

“The best work gets done in the edit. That might be my favourite part because that’s when you’re able to shape the piece into exactly what you want it to be. I enjoy that process”, Shane Koyczan noted.

Growing up Shane Koyczan was raised by his grandparents. It was his grandmother that encouraged him to write and express himself when he felt lonely.

“My grandfather was more of a reader, but his tastes were exclusively for paperback westerns and mysteries. My grandmother was the one who got me started in writing. I grew up without friends and would often complain that I had no one to talk to. My grandmother put a notebook in front of me and said, “When you feel like you have no one to talk to you talk to this.” So, journaling is really how I got started, and she set me down that path,” Shane Koyczan reflected.

“I write about the things that happen to me, and while those experiences are unique to me, there are parallel themes that run through all of our lives. I think that’s why people can connect to the work,” Shane Koyczan added.

In 2014 his book A Bruise on Light became the most successful poetry campaign in Kickstarter history. Crowdfunding and self-publishing have become commonplace. It’s a way for creators to make more money off their work.

“I self publish and record my own work. It’s always been a challenge for artists to do this, but the way the industry is set up has got authors getting $1.25 for a book that a publisher charges twenty or more dollars for. How is it fair that the creator gets a pittance while the publisher gets the pie? Streaming services have put independent artists back in the closet because the only artists who can support themselves through it are the ones getting millions of plays a day. So, what’s left? The tour economy… go out and play shows. Great, would love to do that, but because everyone else is now having to tour to save money to record their next album all the venues are booked up,” Shane Koyczan explained.

“We live in a time where people will lay down hundreds of dollars, or even thousands, for the device that delivers the content, but don’t want to pay for the content itself. An iPod without a playlist might as well be in a junk drawer. A piano without someone to play it is just a piece of furniture. Luckily there’ll always be the fans who want to support us directly. They sign up for your monthly newsletter or they find you on Patreon, but it’s a delicate ecosystem and all you can do is be grateful for the support you get,” Shane Koyczan added.

Long before Gutenberg’s printing press, traveling minstrels would travel from town to town reciting poetry. Although spoken word has always been around, with the advent of TED and the internet, spoken word now reaches millions of people.

“Spoken word came before the written word, so it has a long history. I don’t think TED is responsible for bringing the spoken word into the mainstream. TED is just a stage. It’s the people who are hearing it, clicking on it, sharing it that is bringing it back. People are responsible for bringing spoken word and poetry into the spotlight, and they do it because it says something to them. TED is just another organization asking artists to work for free. Nothing new there,” Shane Koyczan stated.

Shane Koyczan is looking forward to performing in Ottawa. He would also like to extend an invitation to Prime Minister Justin Trudeau to attend.

“2018 was a hard year for me, as I’m sure it was for many people. I’ll talk about that… I’ll tell some funny stories that helped get me through a big loss, but I’d also just like to take a second to invite our Prime Minister, Justin Trudeau, down to the show. I’d be happy to put him on the guest list if he’d be willing to attend. I have a few things to say that he might benefit from hearing,” Shane Koyczan concluded.

Tickets for Shane Koyczan on Wednesday, January 30th, 2019 are $27.50 each. The doors are at 7:00 pm and the show starts are 7:30 pm. Tickets are available online, and tickets are also available at Vertigo Records in downtown Ottawa. Nathanaël Larochette is opening the event. The show is promoted by Spectrasonic.com.