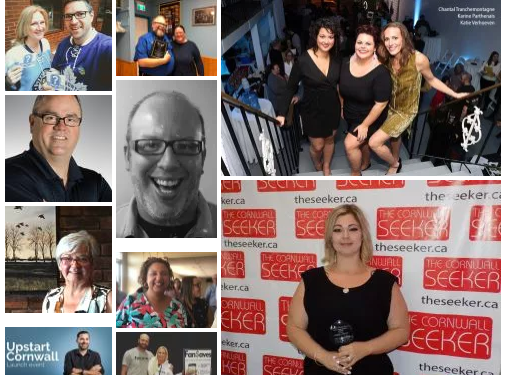 What do they have in common?  They all do wonders to improve this community! They are the Movers and Shakers. They may come from various fields, be it the arts, business, government or non-profits, but they all deeply care about Cornwall and make sure it’s in the spotlight for all the right reasons.

Bernadette Clement has made history in more ways than one this year. Not only is she the first woman to be elected mayor in Cornwall, she is also the first woman of colour to hold this position anywhere in Ontario. She ran a clean campaign and landed first in a landslide victory against incumbent mayor Leslie O’Shaughnessy and candidates Dave Murphy and Nicole Spahich. She is breaking barriers and making Cornwall proud.

It is hard to keep a straight face when you see Shawn. The founder of “ The Cornwall Comedy Festival” has a knack for making people laugh whether by himself, or by bringing top comedic acts to the area. Their philosophy: providing a high quality experience to patrons, while treating performers with respect and kindness. Since 2014 the festival has entertained over 3500 guests and has helped raise over $30,000 for local not-for-profit groups

It has been a busy year for the startup company who has been travelling everywhere, competing in many “Dragons Den” type events and racking honours after honours… And seeding money! They have been proudly representing Cornwall at trade shows, seminars and conventions while simultaneously developing version 2 of their popular app “FanSaves”. Download the app on Google Play or on the Apple App Store.

Sue-Anne’s family is no stranger to business. For many years, her mother, Sue, owned and managed Sue’s Art Gallery on Sydney Street. Years later, the family now spearheads a scratch bakery that specializes in cakes and desserts of all kinds. In 2018, the “chocolatiers” were the recipients of the “Seekers Choice Award for Best Home Based Business”, then, in November, they won the city’s “Win This Space” competition. Watch out downtown, things are going to get Fairy Sweet real soon!

Chantal Tranchemontagne and her team

The owner of “Big Catch Communications” and editor of the Perch Magazine has truly shown a passion for Cornwall. She and her team have been publishing a totally fresh magazine which shines a light on some of Cornwall’s best-hidden treasures. Furthermore, Big Catch was the marketing firm behind Mayor Clement’s successful campaign and continues to offer her social media support.

Chantal “Crazy Knitter” Gilmour and husband John are Big Hearted people. Years ago, they started “Warm Up Cornwall”. On cold winter days, they drove around town, dropping off packages with hats, mittens/gloves and scarves, leaving them up for grabs for anybody who would need them. The charity has grown and now, from daycare centres to schools to nursing homes, Chantal & John are warming Cornwall up one person at a time by providing not only those items but also jackets, snowsuits and warm clothes. A very noble cause.

Newly elected city councilor Eric Bergeron’s big, bold ideas to put Cornwall on the map have resulted in Upstart Cornwall. Upstart Cornwall consists of a group of people with one common goal–seeing this community grow. by attracting new businesses to the city and retaining our young people. The group is open to everyone with only one requirement: ideas! If you would like to know more and get involved, visit http://upstartcornwall.ca

Rose Desnoyers is an accomplished talented painter. She has been a loud voice in the visual arts community, lobbying for an Arts & Culture Centre to come to Cornwall for many years. Recently, she has been involved in setting up the Cornwall Arts Hall of Fame and is now lending her efforts to making that Arts Centre a reality by sitting on the steering committee of the “Be The Link” Campaign. With the city having purchased the BMO building, this goal is near.

Local business manager, community activist and now City Councilor Todd Bennett has always been actively involved in city matters. He has chaired the Culture Plan Committee and the Waterfront Committee, sits on the board of Team Cornwall, Your Arts Council, as well as the Big Brothers Big Sisters Bowl for Kids Sake Committee. He lives, breathes and dreams Cornwall. We can’t wait to see all that he will do for this city as a Councilor.

Kevin is the new Tourism Coordinator for the city of Cornwall. He assumed the position at the end of 2017 and we just LOVE what’s he’s been up to. In addition to overseeing efforts to market Cornwall to tourists and managing the delivery of information to visitors, he has been tremendous to work with. As locals who organize events and activities, we certainly can attest to that. We’re really excited to see the marketing tricks he has in store for Cornwall in 2019.