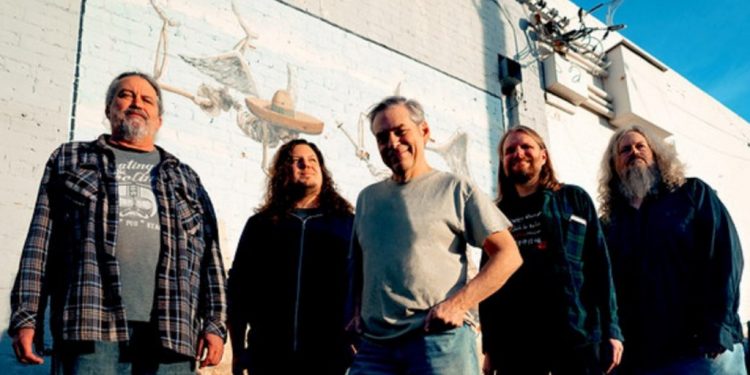 “Dusty Notes was made in Phoenix at Premier Studio. Cris and studio head Jeremy Parker has developed a close, successful working relationship over the last couple years, and it was a fantastic environment to record in. Curt wanted the core of the material to be simple and acoustic-based, to give the band plenty to build on. He and Ron collaborated on the arrangements, and when the band’s former drummer decided to move to Europe, Curt asked me to come in and add the drums. With the basics completed, Curt and Elmo arm-wrestled to see who would get to play lead on which songs. Since Elmo’s wrists are a little stronger than his old man’s, Elmo got the lion’s share of the leads,” said Meat Puppets drummer Derrick Bostrom.

“Dusty Notes” is the first album in 24 years to feature the band’s original lineup of Curt and Cris Kirkwood along with drummer Derrick Bostrom. After nearly a quarter century apart, the band has evolved and changed, but their core chemistry remains the same.

“The chemistry between the original members was always more than just musical. When we got back together, it blew our hair back to find out how much things had changed at the same time so much had stayed the same. The core love is still there, but the music and the rapport is stronger than ever,” Bostrom stated.

Meat Puppets have a released a video for the song “Warranty” off their upcoming album “Dusty Notes”. Visually, the video has a psychedelic feel to it.

“The goal for this album’s videos was the show the band as much as possible. To get our faces before the camera, warts and all, to say to the fans,” here we are! We’re still in this mofo,” Bostrom explained.

Meat Puppets first became a band in 1980. In the early days, they were more associated with the punk scene than the rock scene. Their early releases were off of Black Flag’s SST record label.

“There are so many (fond memories of the early days). The places we saw, the people we met. It would take a book to answer this question. Fortunately for us, our pal Greg Prato wrote one,” Bostrom recalled.

The 2012 book was called “Too High To Die” named after their most commercially successful album.

Meat Puppets influenced many bands associated with the grunge movement of the early 1990s including Nirvana. Later, Meat Puppets gained notoriety when Curt and Cris Kirkwood were guest musicians for Nirvana’s MTV Unplugged performance in 1993 and the subsequent album that won a Grammy. The following year, Meat Puppets released “Too High to Die”.

Meat Puppets go on tour across the United States this April and May.

“We hope to bring all of the songs to the stage and let them tell us which ones want to stick around as part of the set,” Bostrom noted.

On tour, Meat Puppets will be sharing the stage with the likes of Neil Hamburger and All Souls.

“We’ve been friends with Neil Hamburger for decades. It’s such a no-brainer to go on tour with him. I hope we get to do more dates with him, as the opportunity presents itself. The same thing goes for All Souls,” Bostrom added.

Meat Puppets have no current plans to tour Canada, but they hope to return up north soon.

“We love visiting Canada! We have no plans currently, but we hope to return just as soon as we can,” Bostrom concluded.