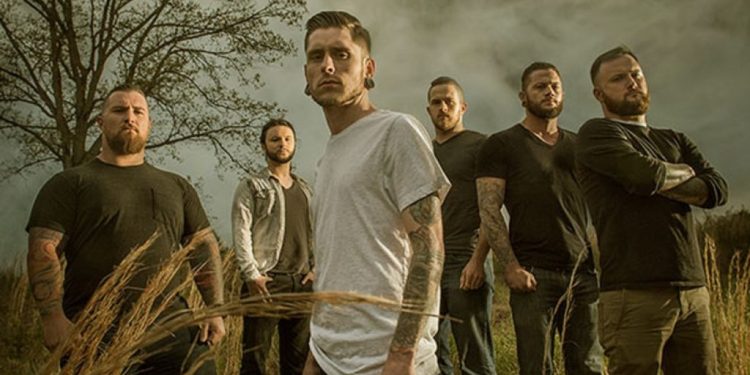 The title of the new album “The Valley” is a reference to the part of Hardin Valley where vocalist Phil Bozeman grew up.

“We felt like it was a strong title, that it could just as well be a title to a movie. It was vague enough to leave some things to the imagination yet forward enough to evoke a dark feeling we were trying to convey. After Phil came up with the title all the other aspects of the record fell into place like album art, visuals, concept, and marketing,” said guitarist Benjamin Savage.

The new Whitechapel album “The Valley” was mixed by David Castillo, mastered by Ted Jensen, and produced once again by Mark Lewis (who has produced for Cannibal Corpse and The Black Dahlia Murder). Each brought their expertise to the new record.

“David Castillo has produced some of our favorite records like Katatonia “Night is the New Day” and Bloodbath “Fathomless Mastery.” So, it was an honor to have him mix the album. Ted Jenson has mastered some of the biggest and best albums around, so we trusted his ear to make the album sound sonically huge. We have worked with Mark Lewis the past 3 albums, so we were used to each other’s work ethic. He has an ear for tone and harmony that helped greatly in the final product,” Savage explained.

Several songs off the new Whitechapel album have been posted on YouTube.

“The song Hickory Creek” is different for us but we worked hard to make it the best it can be. It still has the dark Whitechapel vibe, but Phil sings the whole way through and it pulls on a lot of deep emotions in the music and vocals. I’m really interested to hear peoples take on it,” Savage replied.

Being a part of the Metal Blade Records family means a lot to the members of Whitechapel.

“It feels good to be a part of a list of bands that include Metallica, Slayer, Gwar, Cannibal Corpse, etc. It makes us want to be the best band we can be and honor the legacy Brian Slagel has made for our genre,” Savage explained.

“Navene has been one of my favorite all around drummers for over 10 years now. His work on the Animosity “Animal” album changed my outlook on the Death Metal genre. Not to mention his drums and riffs on the Animals as Leaders album “Weightless” really blew the roof off my head. So, working with him was an honor and privilege. Just knowing he was going to play the drums on our record inspired us to write the best material we could. He flew into Nashville and knocked out the drum tracks in 5 days like a true pro,” Savage noted.

“We all work on our own writing material individually for a few years then when it comes time to do a record we get together and separate the good from the bad. It takes a few days to get through all the riffs and ideas we have, then afterward we work to make songs out of the good material as a band,” Savage added.

When it comes to gear, guitarist Benjamin Savage is a fan of Fortin Amplification, Inc. Blade signature pedals.

“Yes, Fortin knows tone, the man behind Fortin used to hot rod Marshall amps and knows the ins and outs of the circuitry. We used Fortin’s 33 Pedal for the Rhythm tone of the new record. We based the Blade off the 33 but with more options for the high and low frequencies,” Savage replied.

This summer Whitechapel will be touring Europe.

“We are much looking forward to Europe this summer. From the interviews I’ve done with people over there, they seem to be excited about the record. So, the club and festival shows should be a good time,” Savage replied.

Benjamin Savage has many fond memories playing in Southeast Asia and touring with bands like Meshuggah.

My fondest memory is playing Southeast Asia, especially China and Phillippines. The shows were massive, and we never thought we would be playing to crowds in that part of the world. As far as bands go, I find inspiration in many bands, so there are bands we have played with or toured with that inspired me growing up like Meshuggah and The Black Dahlia Murder that have become peers of our which is a cool thing,” Savage reminisced.

A music video for the song “When a Demon Defiles a Witch” has recently been posted online and can be viewed here.