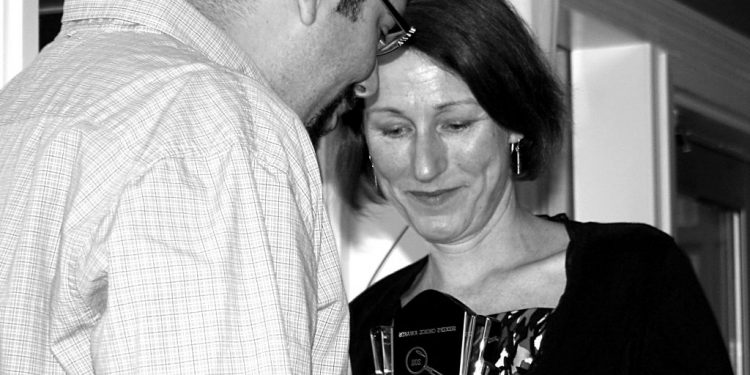 It was swan song time for longstanding and much-appreciated Chief Librarian Dawn Kiddell at the regular meeting of Cornwall City Council on Monday, June 10. Dawn is seen in the photo above at the 2011 Seekers Choice Awards, presenting Jason Setnyk with the Literary Artist Award of the Year – sponsored by the Cornwall Public Library.

After many years at the helm of what Councillor Elaine MacDonald called the “cultural heart” of the city, Ms. Kiddell is retiring.

In her 2018 report, she highlighted how the range of services offered by Cornwall Public Library has evolved over the years, particularly during the digital era.

While books and audiovisual materials continue to represent the lion’s share of the library’s loans to patrons – 90% of the 323,517 items borrowed last year, eBooks now represent 9% and audio and video streaming downloads the other 1%.

According to Ms. Kiddell, patrons can use their library card to access up to five free downloads per month from these services.

Another new feature is a digital genealogy service with the library now subscribed to four in all: ancestry.com, PRDH, Généalogie Québec and findmypast.com (for the UK).

Ms. Kiddell said that the library receives several thousand out-of-town visitors every year who come to research their ancestors in its Genealogy Room.

Another new amenity is a “library of things” featuring a small but growing collection of tech gadgets.

In response to a question from Councillor Justin Towndale, Ms. Kiddell clarified that the Interlibrary Loan Service will now be operating via Canada Post in the wake of the elimination of the former van courier service. She said that the new arrangement is more labour-intensive because items now have to be weighed, packaged and so on for shipment by Canada Post.

Cornwall Public Library is part of the Southern Ontario Library Service (SOLS) which had its annual budget slashed 50 per cent by the provincial government.

After completing her presentation, Ms. Kiddell was warmly commended by several councillors and then Mayor Bernadette Clement for what was felt to be an exemplary career.