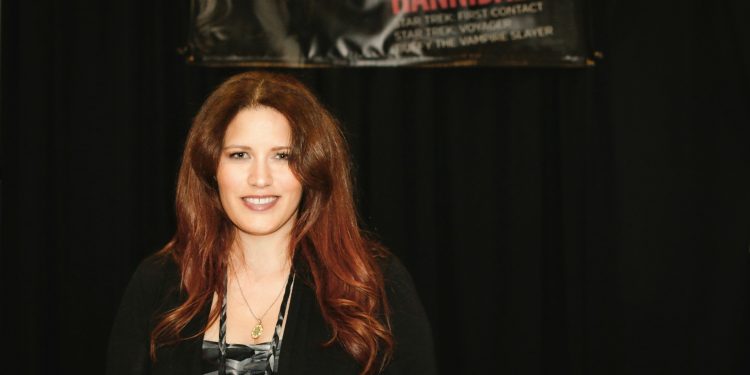 Actress and singer Noelle Hannibal who appeared in the film “Star Trek First Contact”. She portrayed the first female Vulcan on Earth in the 1996 movie. The plot of the eighth film has Captain Jean Luc Picard and the Enterprise crew go back in time to defeat the Borg who want to stop Zefram Cochran’s first test of the warp engine and Humans first contact with Vulcans.

Noelle Hannibal has also appeared in the television series “Star Trek: Voyager” as a Taresian woman and in the television show “Buffy The Vampire Slayer” as part of the Sisterhood of Jhe (a cult formed by an all-female race of fierce flesh-eating warrior demons).

Originally from Los Angeles, Noelle Hannibal made her professional theatre debut playing Chrissy in Hair, then moved to Ireland to tour the country starring in Lock Up Your Daughters (as Hilaret). Her other Los Angeles theatre credits include Chicago (Velma), Gypsy (Mazeppa) and Miss Saigon (Gigi).

Noelle currently resides in Montreal where she performs regularly in concerts, cabarets, and musical theatre productions.

Star Trek celebrated its 50th Anniversary in 2016 and Noelle is a part of that history being in the film “Star Trek First Contact” and on “Star Trek: Voyager” and even “Star Trek Deep Space Nine. She has fond memories working on the “First Contact” film.

“I grew up in Los Angeles watching Star Trek with my Montreal born mom who attended McGill University with William Shatner. I have to admit, I was definitely more of a Star Wars kind of girl. I started getting into The Next Generation, though and that is still my favourite Star Trek series. The first time I worked on anything Star Trek was as a stand-in for Terry Farrell (Dax) on Deep Space Nine. I went to an open call for First Contact and swear I got the job because I was the only girl who knew the Vulcan salute. The First Contact cast was phenomenal. I truly enjoyed my week working with them, though I was disappointed Wil Wheaton wasn’t in the film (though I know some Star Trek fans may not agree with me) I have since had the opportunity to meet Wil at various conventions and we have bonded over our great love for our LA Kings. It has been fun reuniting with everyone at cons,” Hannibal responded.

She also appeared on Buffy The Vampire Slayer, a television show that shows women as strong and independent. She thinks TV shows like Buffy the Vampire Slayer are important for women.

“I think any tv show or film that shows women as strong and independent is fantastic. The female characters on Buffy are some of the finest, in my opinion. My most recent favorite female character was Charlize Theron’s in Mad Max. She was awesome! Sadly, there are always going to be issues of sexism and inequality in the film industry. At least it doesn’t seem to be going away anytime soon. In my experience, theatre is a little different. I was thrilled this year to see women dominate the Tony Awards and make history. I just do the best I can, put in the work and hope that I can book jobs based on my talent. As far as values, there are many things people can learn from a show like Buffy or many other shows. Tucked away inside clever dialogue are great lessons about life, death, friendship, finding your true self and learning to let go,” Hannibal stated.

Noelle Hannibal has appeared in both theatre and musicals, and she enjoys both, but theatre has always been her first love.

“I love both the film and the theatre. They are such vastly different mediums. But the theatre has always been my first love. There is nothing quite like the energy on opening night when you get a great laugh or move someone to tears. In theatre, every show is different. There are no retakes or do-overs. If you flub a line, you flub a line. Theatre is perfect in its imperfection,” Hannibal said.

One of her favourite acting roles was playing Kyle’s mom in the South Park live musical.

“I love transforming into different characters. A few years back, I had the opportunity to do South Park as a live musical production. I played Kyle’s mom, Sheila (The B#tch). It was incredibly fun and rewarding. Plus, I got to sing “Blame Canada”! Haha!

I have also had the opportunity to do the musical Rent twice, playing two different characters. The first time, I played Maureen, a role originated by Idina Menzel (Frozen). Maureen is definitely more my casting, physically and vocally. The second time I did Rent was a year and a half ago as a fundraiser to raise money for my best friend whose husband passed away suddenly leaving her with two young children and no life insurance. Rent was the first show my best friend and I saw together on Broadway. It was also the last thing her late husband was listening to in his car the day he died. She got to choose which role I played and she chose the Mimi, the 19-year-old, HIV positive, heroin-addicted, Latina S&M dancer who is supposed to be petite. I’m just under 6′ and not 19 (but not far off, haha!). Mimi was challenging vocally for me. It’s the hardest I’ve ever had to work on my voice for a show. I also had to become much more comfortable in my own skin than I think I really was. Mimi’s got moves.

On film, I would have to say my favoruite was Buffy. Mainly because I was a huge fan before I booked the job. I got to go to fight school in preparations and got killed multiple times on screen (I played several different demons) I have some great memories from my time on Buffy. What a great, great cast,” Noelle Hannibal recollected.

Noelle Hannibal enjoys attending the various cons and meeting fans as well as the other guests.

“I have attended many, many cons over the years. I love meeting the fans. It’s my favourite part! I’m pretty down to earth and I really enjoy getting to know them. I try my best to remember their names year after year. But I also love meeting the other guests. Everyone is a fan of someone, right? I have to admit, I’ve geeked out a couple of times. I’m told by the fans on my Facebook page that they love seeing my posts/pictures when I’m at a con because I look like any other fan. My recent favourite was some impromptu singing John Barrowman and I did in Ottawa. The videos are up on my YouTube channel,” Hannibal replied.

The above quotes are from an interview with Hannibal prior to CAPE several years ago.

Halloween Comicfest on October 26th is presented by CAPE and Fantasy Realm. The event runs from 10 am to 5 pm and also features guest Pat Patenalide, James Lapierre, and Aero Cosplay. There will also be exhibitors, free comic books, treats, prizes, and more. Admission is $3, and children 12 and under can attend for free. For more information visit the CAPE website.