by Editorial Board
in News and Announcements
Reading Time: 2 mins read
84 1 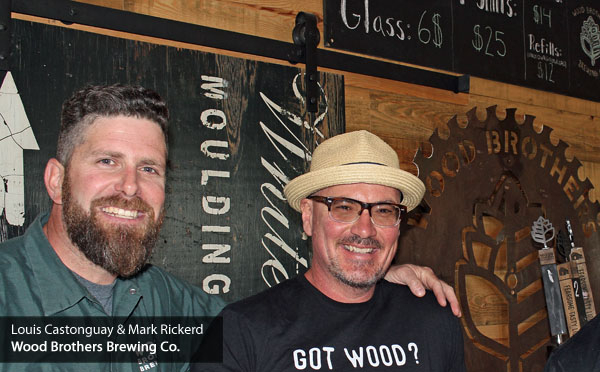 businessentreprisecentre.ca – Mark Rickerd and his team at Wood Brothers Brewing Company shared their passion for craft beer at the brewery’s Grand Opening this past Saturday.

The event was held at the brewery’s on-site brewpub in Glen Robertson, Ontario, just 15 kilometres East of Alexandria. A selection of six different IPAs were on tap – available in sampling flights and individual serving sizes. Variants of the day included Citra Daze, Highland Haze, Overcast, Nowhere Ride, Electrik Pine and Johnny Denver. To the delight of all in attendance, the draught taps remained well lubricated for the duration of the afternoon.

“The support we’ve received to date has been phenomenal,” says Mark Rickerd, owner of Wood Brothers Brewing Company. “Sales to date are what we were hoping for, we just didn’t expect to get here this quickly.”

Rickerd established Wood Brothers Brewing Co. with a team of family members and brewmasters. It is still early days for the brewery, but initial signs point to this becoming another local success. During the initial launch parties hosted by Jet Set Pub and Esca Pizza+Bar in mid-April 2019, patrons ran the Wood Brothers’ taps dry. Luckily for craft beer drinkers, their signature Highland Haze IPA and Electrik Pine Farmhouse New England IPA have been restocked and are free-flowing once again.

Offering consistent variety will be a primary focus for the new brewery, with IPAs being the style of choice. The goal is to introduce 300 variants in their first year of operation.

“With a focus on IPAs we’ll continue to craft unique flavours that we hope our customers will enjoy for years to come,” says Rickerd.

Wood Brothers can be found on tap at Jet Set Pub, Esca Pizza+Bar and every Saturday at the brewery’s on-site brewpub.