Interview with indie-electronica duo Paragon Cause 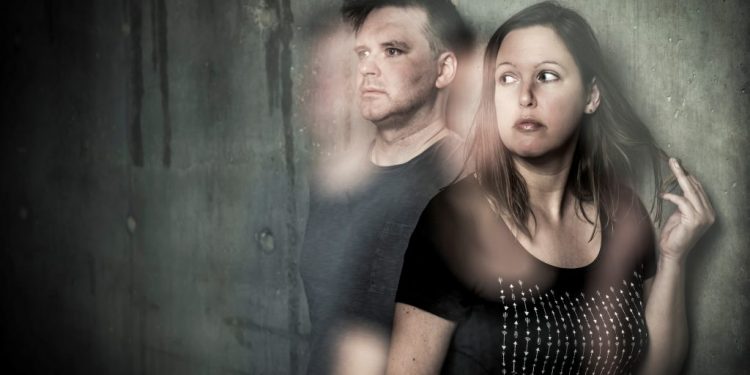 Ottawa, Ontario – Paragon Cause, an indie-electronica duo based out of Ottawa, is comprised of songwriter and guitarist Jay Bonaparte and vocalist and keyboardist Michelle Opthof. They are releasing a new single and video for the song “Drop Me In” at The Blacksheep Inn in Wakefield, Quebec on July 19th. The song is off their new EP titled “Lies Between Us” which is being released on September 3rd, 2019. Sune Rose Wagner of The Raveonettes produced the album, it was mastered by Joe LaPorta, and it was recorded at Neko Studios in Ottawa.

Before Paragon Cause, Jay played in Rose Cousins with Joel Plasket drummer Benn Ross and he was also admitted to medical school. While Michelle completed a music degree at Carleton University, dabbled in musical theatre, and played events like weddings.

“Prior to Paragon Cause, I played with Rose Cousins for 3 or 4 years back in Halifax. We both started playing live shows together along with Thrush Hermit/Joel Plasket drummer Benn Ross. We recorded two unreleased albums together prior to her getting famous and wining Juno’s. After that I played with a band called Servo, a damn cool rock/blues band, plus some other groups including Caledonia,” Jay said.

“I did a music degree at Carleton University, dabbled in musical theatre, sang for weddings/funerals, but no real bands. After a decade, I was ready to put some real effort into finding someone to connect with,” Michelle replied.

The two networked online via the website Bandmix, they jammed and realized they had chemistry.

“We met in the most modern of ways. Both of us had “real” jobs for the last 10 years. Oddly enough, while touring with my band Servo, I decided to study for the MCAT on tour and got into medical school. After that, I slipped out of music for almost 10 years. Michelle had an eerily similar experience. Around the same time, we both put profiles on a site called Bandmix. We both met some interesting (to say the least) people prior to meeting each other. We planned to get together and jammed on Norwegian Wood by the Beatles. Right away, it sounded unique. It was incredible. Then, we wrote and recorded the song, Next Time off our first album. After that, we just went with it,” Jay added.

The songwriting process for Paragon Cause varies, but most of the time, their music is written spontaneously and is improvised. For example, their new single “Drop Me In” is typical of that process.

“Well, there are three ways we do it. We are very spontaneous, and about 90% of the songs are just written on the spot, improvised. Drop Me In is pretty typical of that. We were sitting on my front porch, and we wanted to write a song in the vein of Junior Kimbrough, so I tuned to a D and started playing. Michelle made up the vocals in real-time, we recorded it on our Izotope Spire, and that was it. We make very crappy demo’s and strongly believe in making crappy demos and not good demos. If you make a good demo, you try to recreate that in the studio, and it ends up sounding stale. Sune Rose agrees 100% with us; he says the crappier the better. On our new album, some songs Michelle would come in with a vocal melody, and we would go with it. The song Save Me was written after a challenge by Sune Rose. He said, “spend the night listening to The Ramones and use that to write your version of a pop-punk song.” So, we listened to The Ramones and drank wine. Then, I just came up with the whole song on the spot, and Michelle improvised the vocals. The next day, Sune came over and loved it. We recorded it in like 2 hours. The other thing we love is to record a song and then scrap all the music. I Waited (off the upcoming EP – Lies Between Us) was written as a happy folk song; and we have the demo for that. Sune came over, we recorded it and just threw the guitar away and kept the same melody. After that, we changed the chords, and it just became this new song. It’s very powerful,” Jay noted.

The title of the new EP “Lies Between Us” comes from the lyrics of the song “Separate Lives.”

“We have a song on the new album called, ‘Separate Lives’ which includes the line, the lies between us. It has a few meanings, like most songs on the album. It is the idea of two people coming from different backgrounds forming a new relationship together. People always try to present their best selves, but everyone has secrets. If all the secrets are told early in a relationship, it can be terrifying. So we ran with it and emphasized the wall that it creates between the people. It also refers to societies lies between each other. There are many things that we ignore, consciously or subconsciously, that if we really think about them, it should be a much bigger deal. As you know, there was recently a big court case in Canada involving a celebrity who was accused of sexual assault. We all know the truth; everyone knew what this guy was doing, what kind of person he was. It was all out there. Just like Harvey Weinstein, everyone knew but kept it secret. They were in rooms with others who knew the truth but said nothing to each other, which formed the lies between them. Also, from a legal point of view, our system is not designed to know the truth, it is designed to cast doubt. You just need doubt to get off,” Jay responded.

There is a music video for the song “Separate Lives” posted on Youtube, and visually it has a minimalist psychedelic aesthetic.

“For Drop Me In; I made that myself. The song is about helping someone with depression come back to life. To find the person they know they were and can be again. We had some slime that I made into a unicorn. I placed it on my turntable and filmed it, then reversed it. So rather than the unicorn melting, it comes back to life. It’s supposed to be simple, but the image of the women singing represents that friend you have that is there but lost in a haze of depression and false thought. The lights change over time and flicker to distract. They are the thoughts you have, the rabbit holes your mind takes you when you have depression. They are distorting reality. As the song climaxes, the singer becomes clear but eventually, fades out again. It is a reality. It is not simple,” Jay commented.

The EP was produced by one of Paragon Cause’s musical heroes – Sune Rose Wagner of Danish pop/alternative band The Raveonettes. The two communicated over Twitter.

“It was a dream come true. Simple as that. About 1 year ago, I was on twitter and saw a Tweet from Sune Rose. Jokingly, I wrote, “Maybe we can get you to produce our next album.” He wrote me a private message and we wrote back and forth. After a few months, we didn’t hear back then out of the blue, we get a message, “Still want to work on music together?” After that, we booked a time, and he flew up to Ottawa. The week of recording went so well; the three of us were very sad it was over. A week later, Sune texted me asking what we were up to for New Years. So, he drove up from New York, rang in the New Year and then spent another week recording. It is now a friendship. We have a lot in common. We will be working together again in January 2020,” Jay remarked.

“For us, working with Sune meant a lot, but it’s hard to explain. One thing, we knew we had the ability to write great songs, but perhaps we didn’t know how good. Hearing Sune tell Michelle that she was one of the best vocalists he has heard, me seeing him rocking out and playing air guitar to our music was mind-blowing to say the least. He is a crazy talented individual. We have never seen anything like it. We learned so much from him. As songwriters and producers. We went into the sessions with the mindset that if we got 1 or 2 good songs, we would be happy. Instead, we got 16 plus 3 that we will finish in 2020,” Jay declared.

Paragon Cause recorded the new album at Neko Studios. It was an incredible experience for the band.

“It was incredible; it’s the best studio in Ottawa. It’s a chill basement with pictures of Fulci’s Beyond and Robert Smith on the walls. It really gets you in the mood, especially when you want things to be spontaneous and filled with raw emotion. It has some great gear, but we kept it simple. We used an AKG414 into a UA Solo610 with a Warm Audio Pultec style EQ and a WA1176 for all the vocals. We kept things to a minimum. Both Sune and our band have similar philosophies about songwriting and recording. You need to set some limitations; otherwise, you get overwhelmed with choice. It forces you to rely on creativity and not gear. We only used three synthesizers on the album but processed the sounds using some analogue distortion devices. For guitar, it was all guitar pedals direct into the UA Solo 610. We had to commit to a sound. I would record a guitar part using a pedal, and that was it. The effects were done during tracking; it forces you to be creative and find good sounds. No amps were used, and we love that we can do that,” Jay emphasized.

On July 19th, Paragon Cause will play a concert at the iconic Blacksheep Inn and release their new music video and single there.

“We are excited to share new songs; the show will be emotional and powerful. There will be an eclectic mix of songs, but we are pretty confident you’ll enjoy the ride. Playing at the Blacksheep Inn is just an extension of the dream we are living in after working with Sune Rose. We can’t wait to share our excitement with fans. Also, Scotty will be playing bass for us, and he is super cool, so don’t miss that,” Jay concluded.