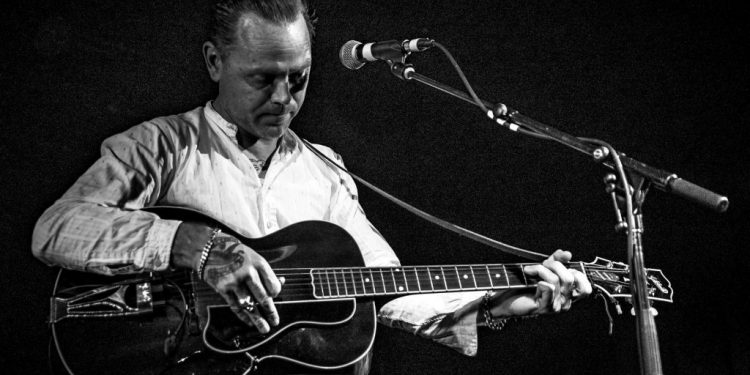 “The whole story of the recording process is told in pretty good detail on the rear of the album cover, people can buy the album at my show and if they like the sound of the record then all the info is on the back. If they buy the vinyl LP version it also includes all the lyrics in the gatefold cover,” C.W. Stoneking replied.

“I like playing all the songs from that album though some I don’t perform solo in the cases where there are some intrinsic parts of the song that I’m not able to do by all by myself,” C.W. Stoneking added.

“Gon’ Boogaloo” was self-released on his own label King Hokum Records, and it peaked at No. 17 on the Australian Recording Industry Association charts.

“I always release my records on my own label since I had an early unpleasant experience licensing my first album to a small label in Australia,” C.W. Stoneking disclosed.

C.W. Stoneking is writing new music, but there is no word when a new album will be released.

“Yeah I’m working on songs, I’m just playing guitar on these songs. I make up small bits of music and gradually embroider and expand on them til I get a song, that’s how it usually works with me,” C.W. Stoneking explained.

“His people sent a message to my people when I was on tour in New York City. Jack White was there doing some of the recordings for his album, so I went over to the studio and he played me the music of the track which was already recorded. He had the dialogue written out for me to read over the top of the music. He read it once to demonstrate to me the idea then I read it a couple of times which they recorded,” C.W. Stoneking recalled.

C.W. Stoneking also toured with Queens of the Stone Age in 2018, and after he teamed up and recorded with Josh Homme for a Christmas Charity duet of “Silent Night.”

“It was a fun tour. Josh came to me early in the tour and told me about his idea for a 7” Christmas single for charity, and asked me to do a duet with him. Later in the tour, he decided to do Silent Night. We went to a studio in Western Australia where we were on tour at the time and spent the day fooling around with the song and recorded it,” C.W. Stoneking reminisced.

Fans can expect to see an incredible solo show in Ottawa on September 18th at The 27 Club.

“I’m performing solo on this tour. I have my old 1927 Gibson L5 guitar. It’s just me and that guitar on stage,” C.W. Stoneking concluded.

This event is 19+, doors are at 8 pm and the show starts at 8:30 pm. Gentlemen of the Woods will be opening the show. Tickets are $17. Tickets are available at Vertigo Records and online at Ticketfly.