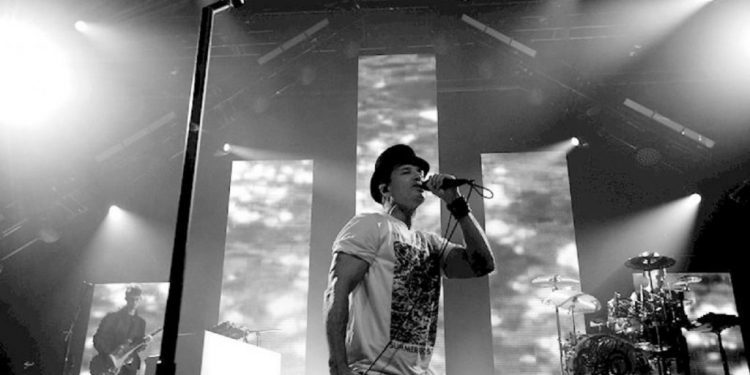 “I’ve been thinking about it for a while. I’ve at a point where I’m always producing everything myself. I remember Jack White once said he liked that moment when everyone takes off their hat – whatever hat that may be as producer, guitarist, engineer, or whatever else. I wanted that, so I thought, let us open it up,” Stephan Jenkins replied.

Two years ago, Smashing Pumpkins frontman Billy Corgan said on MTV that Third Eye Blind was his favorite band. Now he is collaborating with Third Eye Blind on their new album Screamer.

“We saw each other backstage at the Forum at the KROQ Christmas show. We had a good chat, and he invited me over to play some of my songs for him, so I did. He went over it and really helped with the arrangements. It was very cool. The most important song he worked on with us was “Light it Up” where he wrote part of it, and it was nice. He worked on other songs too, like “Who Am I,” Stephan Jenkins explained.

Alexis Krauss of Sleigh Bells is featured on the album’s title track and appears in the music video for “Screamer” that came out on October 4th.

“Working with Alexis was great. We hit it off and became pals. The song Screamer about owning your voice and owning your identity. It’s about putting it out there and not being subverted and nullified by these mind-numbingly bizarre times that we’re living in. I feel like people with healthy moral psychologies have been gaslighted, so this is a rallying cry against gaslighting. The song is about using your voice, so it’s very positive. There is an element of escapism too. We’re living in this weird autocratic time, so we need music for escapism, but we also need it to inspire passion,” Stephan Jenkins explained.

Escapism is exactly what Stephan Jenkins provided to hospital patients at a recent visit to St. David’s South Austin Medical Center in Texas. He played music for them in cooperation with the non-profit group Musicians on Call.

“Music heals minds. Music brings to life the muse and makes those feelings we have rise up and be manageable and cathartic. When we share music, we realize we have these common feelings, and that we’re not alone. That’s why we’ve been building amphitheaters for 10,000 years, and that’s why bands go on tour every summer,” Stephan Jenkins replied.

This summer Third Eye Blind co-headlined a North American tour with Jimmy Eat World called the Summer Gods Tour 2019. The band has also been working to reduce their carbon emissions while touring.

“Also, I love when the lights go out, being on stage, and starting to play. The band is very connected to each other,” Stephan Jenkins added.

“Clearly, we love it. We are close like brothers, have deep regard, and a strong state of trust. We’ve been in it since the beginning (Brad and I). All the time I’ve known him, we’ve never had words, and he’s an amazing guy,” Stephan Jenkins went on.

Third Eye Blind is on Megaforce Records, a label that has a history of working with top tier artists, and helped launch the career of Metallica.

“It’s all about Missi Callazzo. She is an integral part of my whole world, and it’s all about working with her. A lot of bands will say the same thing. There are very few people that I can trust who can deliver and make it happen and have their hearts fully devoted the way she does. She the heart and brain of Megaforce,” Stephan Jenkins responded.

The new Third Eye Blind album “Screamer” features lots of great songs including two versions of “Who am I”. An acoustic version of the song appears at the end of the album.

“I just liked it. Chad really worked on the production of that song, and so did Brian, and I liked that production. But I did another take, with that whole bedroom pop vibe I had when I first wrote it. It had that needle in the hay feeling to it. I recorded it that way as a b-side or something, but I liked it, so why not put it on the record,” Stephan Jenkins pondered.

Perhaps the best song on the album is “The Kids Are Coming (To Take You Down)”. The song was influenced by the Parkland student activists who spoke up and rallied against gun violence in America after a tragic school shooting.

“That song is my favorite song on the record. What influenced me was what happened after the Parkland School shooting in the United States – it produced young teenage activists. They really inspired me because they were unafraid to really use their voice in a way our political leaders can’t seem to manage. They influenced people like Greta Thunberg. When the rift for this came up, I was in Asbury Park, New Jersey, and I sang it in one take. When I heard the mix of it, when it came back, I felt like I was really comprehended. It had that energy, vibe, and glorious rage when a good track comes to me,” Stephan Jenkins said.

Artists look forward to their next song and their next album. Often, fans look the other direction, towards their favorite songs of yesteryear, songs like “Semi-Charmed Life”. However, there are many fans of Third Eye Blind who are interested in their more recent work.

“It’s an amazing feeling to get out on the stage and there are 50,000 kids out there. To be able to play to them, to be able to light them up! That is a rare feeling. But there is a whole culture of fans who come to us not through our hits, but through albums like “Dopamine”, and “We Are Drugs”. We’re really an underground band that has been camouflaged by catchy tunes. It’s more complicated than that, I think the closest analogy is Radiohead, in that they have songs like “Creep” and hit songs off of “OK Computer”, but it’s all this other stuff brings out the band’s longevity,” Stephan Jenkins noted.

Members of Third Eye Blind look forward to going back on tour and playing their new songs.

“I’m looking forward to being able to play new songs for people and watching how the new songs are reflected in people’s eyes. I think that’s exciting,” Stephan Jenkins concluded.

More than $1.2 million raised as part of the 2019 Lowe's Canada Heroes Campaign