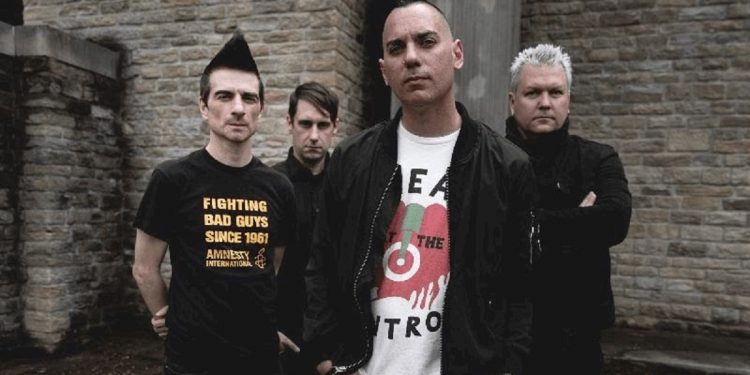 Ottawa, Ontario – Pittsburg political punk band Anti-Flag are playing The 27 Club in Ottawa on March 11th, 2020. Also, their new album 20/20 Vision comes out today. Lyrically, their album is not just a reaction to the Trump presidency, but a call to action to change society.

“It’s about passion and actively choosing optimism over cynicism, in all decisions made,” Anti-Flag bassist Chris #2 said.

“The issues we’re facing are unprecedented. The number of suicide deaths for lgbtq+ people are up in the hundreds of percentiles. Hate crimes are up as well in places Donald Trump won. He has further marginalized and cast aside the most vulnerable and victimized in our societies. It’s been more painful to be a person of empathy than maybe people anticipated,” Chris #2 went on.

Last week, Anti-Flag released a music video for the song “The Disease”.

The video shows how we can see the world from radically different perspectives.

Lyrically, Anti-Flag only address issues that they are passionate about, and that creates authenticity for the audience.

“We find the things that strike chords within us. We can only speak to issues that we’re directly passionate about. If we try to fake knowledge or fake that sincerity people would smell that bullshit from a mile away,” Chris #2 explained.

Anti-Flag recently collaborated with The Critics Company in Nigeria to make the music video for “Unbreakable”.

“I found them on Twitter. Their spirit was supremely rooted in the ethics I believe to be most punk rock. Even though our lifestyles are insanely worlds apart, we found commonality in our struggle to make art and share it, in the face of social norms, economic restrictions, etc. This song is really personal to us, it’s for Justin’s mother who passed away from cancer last year, to find people to tell their personal story with the video was tremendously humbling for us,” Chris #2 disclosed.

In the music video for “Hate Conquers All”, the song begins with a sound byte from Trump. Trump’s words are a reminder of how important it is for people to exercise their democratic freedom to rally and protest peacefully.

Youth protestors like Greta Thunberg are inspirations to us all – reminding us to exercise our democratic muscles.

“I think Greta like most young people involved in the environmental justice movement, they’re inspirations. All young people have an inherent belief to care about more than just themselves. We must lift up, champion and support this belief. At its core, it’s empathy. The backbone of punk rock” Chris #2 stated.

On their upcoming tour, Anti-Flag will be sharing the stage with Grade 2.

“I’ve only ever heard them on a recording. Can’t wait to tour with them. Doll Skin, also on the bill, we’ve met but also never toured with. Making new relationships, building our community, it’s the goal of every touring experience” Chris #2 replied.

Fans can see Anti-Flag and Grade 2 at The 27 Club in Ottawa on March 11th. The show is promoted by Spectrasonic, doors are at 7:00 pm, and tickets are available online.

“At every show, we play, the room is a space to challenge racism, sexism, homophobia, transphobia, bigotry of any and all kind. This show will be no different. We have setlists built that go through the entire catalog of our band, it will be a demonstration of unity and respect. And a ton of f-cking fun,” Chris #2 concluded.

Why Pilots Should Get A Life Insurance