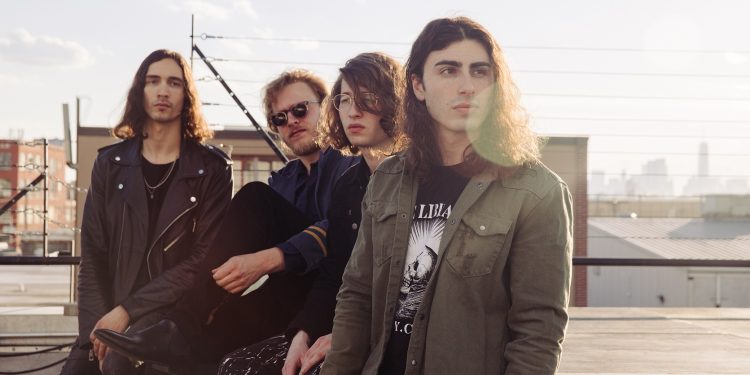 It was recorded live to tape, preserving a raw and real feeling in the riffing tempered by relatable and emotional lyrics.

“I’m beyond excited to share my debut album with the world! It’s been a long time coming, and I cannot wait for people to hear this thing. I think anyone who likes real rock and roll will like this record, plain and simple. It’s got a classic vibe but it’s modern, it’s heavy yet sweet, it’s loud and melodic, it’s raw but tight, it’s all the elements I think a good rock LP should have,” stated Toronto singer and guitarist Justin Benlolo.

“The recording process couldn’t have been any better if it wasn’t for our producer, Joel Hamilton. He truly captured what we did best and got out of the way essentially. Some would say that recording to analog tape is an outdated and complicated technique but Joel insisted we have that element on this record. I for one believe that the tape gives a certain saturation, especially on the bass and drums, that you cannot get with a fully digital album. I can’t wait for everyone to crank this thing, February 14th can’t come soon enough,” Justin Benlolo went on.

BRKN Love shared their newest single “Flies In The Honey” from their upcoming self-titled record along with a lyric video.

“Flies In The Honey” is a jab at Big-Pharma. It’s about wrongly prescribed medication to people who don’t need it. To be more specific, it’s mostly about prescription amphetamines. I saw friends go through university and college doped out of their minds, emerging through it all looking like zombies. These things were having detrimental effects on the health and wellbeing of these students. We’re not advocating that people shouldn’t take their medication, that’s not the point of this song. We are essentially calling out the doctors and the people above them who are handing out these things like candy to people who don’t really need them,” Justin Benlolo explained.

In support of BRKN Love’s self-titled album, the band will be heading across Canada with Royal Tusk. The “Thunder and Tundra” tour begins in early February, spans 6 provinces and kicks off in Red Deer, Alberta.

BRKN Love’s show Friday, February 28th, 2020 in Ottawa will be their debut in the Nation’s capital.

“As a Canadian, I feel ashamed to say that I’ve never been to our capital city, so this will be very cool for me. What’s even better is that I have a bunch of friends at Carleton University that have never seen my band and will definitely come to the show! The tour will be a lot of fun, I can’t wait to see more of my country. I’ve truly seen more of the USA than Canada so this is going to be really cool,” Justin Benlolo concluded.

The show, presented by Spectrasonic, is 19+ and tickets are $15. Tickets can be purchased online via Eventbrite.ca or at Vertigo Records. Doors are at 7:00 pm and Sights & Sounds will be opening the show.