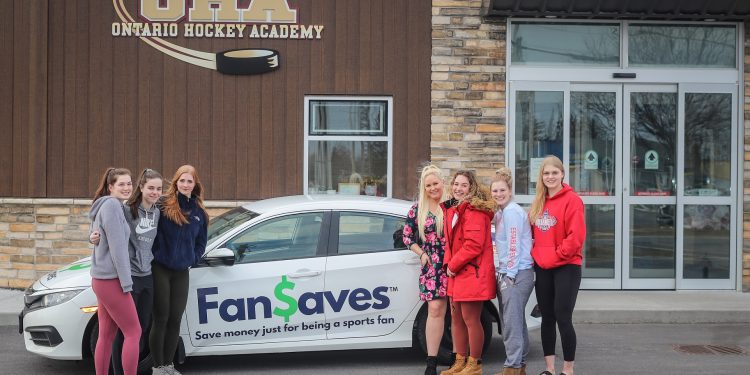 She spoke to the Grade 12 girls about her experience as a hockey player, what it was like attending university, becoming a journalist, working in the world of marketing, and becoming an entrepreneur who runs her own company.

It was an empowering message for the female student-athletes who are only months away from graduation.

“Shannon is the CEO of a tech company. Also, she has experience in marketing and journalism. She’s a published writer, a University graduate, and someone who used to play hockey and remains close to the game today. She is well-spoken, confident, and an excellent role model for our upcoming graduates who will soon be attending post-secondary,” Professor Setnyk explained.

Shannon had an engaging conversation with the students, and they appreciated her visit to the school. “She’s a fantastic choice for a guest speaker, I learned a lot, and it was inspirational,” said Gabi Davison Adams who will be attending Harvard University in the Fall.

“Being a CEO can mean working 14 hour days, but it also offers opportunities like today, to speak with students,” Ferguson added.

Shannon Ferguson has an impressive background. She graduated with a Bachelor of Communication Studies at Wilfrid Laurier University; she also has a post-graduate diploma in Broadcast Journalism and a certificate in Sports Industry Essentials from Columbia University in New York.

In journalism, she was a Production Intern at Entertainment Tonight, she had a talk show on TV Cogeco, and she started a blog and was published in the Huffington Post and The Seeker.

In the field of marketing, she was a marketing representative for Kool FM 105.3, and she also did marketing for the Cornwall Nationals FHL hockey team.

FanSaves was co-founded by Shannon Ferguson and Kris McCarthy. McCarthy, who is COO of the company, is a former professional hockey player who graduated with a Business degree from SUNY Potsdam. His background experience is in Sports Marketing and Sales.

FanSaves is a sports marketing app that can help fans save money. It can be downloaded for free on the App Store of your smartphone.

The company has partnered with dozens of sports teams, restaurants, and businesses. Also, FanSaves has had ongoing discussions with the Ottawa Senators and Boston Bruins organizations.

Oral communication is vital in the world of business and marketing. Students who learned and practiced verbal communication in the ENG4U course got to see real-world applications of what they are studying via the curriculum.

With FanSaves, Shannon and Kris have made successful pitches, including winning $100,000 at the Renfrew County RC100 Startup competition.

Furthermore, FanSaves was a semi-finalist representing Canada in Germany after winning the Get in the Ring pitch competition in Ottawa.

Lastly, Shannon was taken on a tour of OHA, and she was very impressed by the facilities. “I wish there were a school like this when I was playing hockey as a teenager,” Shannon stated. “Also, I met some incredible young people, and I was happy to offer some mentorship,” Shannon concluded.