by Editorial Board
in News and Announcements
Reading Time: 2 mins read
39 2 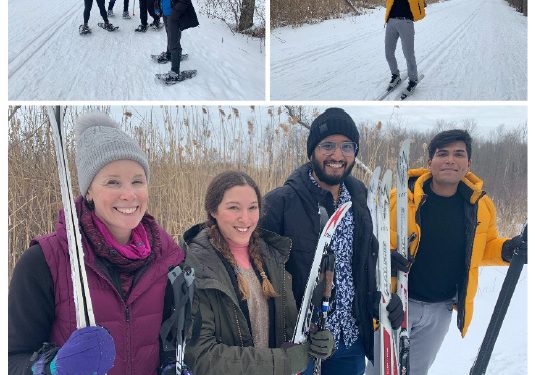 SUMMERSTOWN, Ontario – More than a dozen St. Lawrence College students descended on Summerstown Trails March 2 and many of whom had never been on snowshoes or cross-country skis in their lives.

The international students from India were blown away with the trail system, but there was a steep learning curve when it came time to strap on the equipment.

“I fell like 50 times,” joked Arth Shah, a resident of Gujarat, India who is studying in the environmental technician program at St. Lawrence College’s Cornwall campus. “But I got right back up again every time.

“This is a great place to enjoy the outdoors. It’s nothing like the weather we have in India.”
Indeed, while the system at Summerstown Trails is in impeccable condition given the cold weather of Canadian winters, in India at this time of year the temperature hovers around 40C.

“Some didn’t even know what cross-country skiing or snowshoeing is,” said Jordan Kevan, an environmental technician professor at the college. “I told them it will be fun. And if it isn’t fun, at least it will be an adventure. And if it’s not an adventure, then at least you’ll be able to send a photo home to your parents.”

“I saw a lot of smiles, and also a lot of snowy pants.,” said Kevan. “But that’s part of the experience and everyone seemed to have a smile when they were getting up after falling. When we turned around and started coming back the confidence level had really improved. I was really excited for the students from India.”

Summerstown Trails, the majority of which is owned by the County, is operated by a dedicated army of volunteers who have been driving home the message of fun times at the trail system since before the snowflakes began to fall this winter.

The result will be about 4,000 visits this season, which includes hundreds who took part in the Family Day festivities last month.

“We had 525 people here for Family Day,” said Jean-Pierre Tibi, a member of the Friends of the
Summerstown Trails. “We’re very proud of that number. Of that number we had 300 people who used our equipment. Everyone was having fun and everyone came back with a smile on their face.”

Forage Brings Us Together With Food