Interview with Doll Skin who are touring with Anti Flag 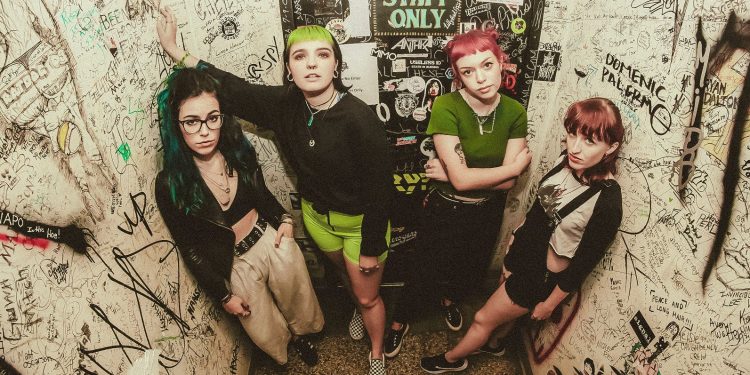 Ottawa, Ontario – Doll Skin will be opening for Anti-Flag at the 27 Club in Ottawa on March 11th. Doll Skin, who hails from Phoenix Arizona, consists of Sydney Dolezal, Alex Snowden, Nicole Rich, and Meghan Herring. They signed to Hopeless Records and released their third studio album in 2019 titled “Love Is Dead and We Killed Her.”

“Hopeless Records has been a team of some of the most amazing people we have had the pleasure to work with them. Their diverse roster of bands and mainly female staff made it so welcoming! They made it known from day one that we belonged there and that they were there for us. They’ve helped guide us in a great direction,” said Sydney.

Mike Green was the executive producer of “Love Is Dead and We Killed Her,” and Will McCoy worked on production and mixing.

“For LIDAWKH we worked with Will McCoy and Mike Green out in LA on this album. We brought a few ideas to them, but mostly we worked small ideas and snippets into the songs they became! Working with them, we used a few different tactics. Sometimes we would start with lyrics and try to match the song vibe to the lyrics/melody. Most of the time, it started with a guitar riff, and we worked around that,” Sydney replied.

The band has earned success and has been featured in Alternative Press, Kerrang! And Rocksound. Also, Billboard Magazine ranked the song “Mark My Words” at #14 on their list of The 25 Best Rock & Alternative Songs of 2019. Furthermore, the album peaked at #10 for US Heatseekers Albums and #39 for US Rock Album Sales.

Another notable song by Doll Skin is “Outta My Mind.” The band released a music video for that song that has a retro vintage look.

“The vintage look naturally followed suit when we decided to shoot the video on film, and after choosing the super quirky, colorful location on the Salton Sea,” Alex explained.

According to Forbes magazine “The Music Industry Still Has A Long Way To Go For Gender Equality.” However, bands like Doll Skin are shifting that paradigm, and are already inspiring the next generation of musicians.

“We strive to be solid role models for anyone wanting to pick up an instrument and make music, especially young girls since when we were all learning to play and perform, we knew of very few female figures in the music industry doing what we wanted to do. The fact that this question comes up so often may point to the fact that there’s still work to be done. We want to do our part in abolishing inequality to the point that the term “girl band” is obsolete,” Alex elaborates.

“I do believe there are biases and stigma around non-men in the music industry that make it feel cold and uninviting to anyone who doesn’t fit the masculine role you see way too often in every part of the music industry. I can only hope that we can influence more women and non-men to do what they can to make their place and make their mark in this industry,” Sydney added.

“My advice to budding musicians and band members would start with practice. Passionate focus is so basic yet so important! Your musical and creative skills will carry you as far as you need if you nurture them! You can even practice things like teamwork, communication, mindfulness, all that good stuff. Applying skills is just as important as learning them. Learn a new scale and apply it by improvising with it, learn a helpful communication skill, and apply that when your band needs to make an important decision, and so on,” Alex stated.

In the meantime, Doll Skin is touring with Anti Flag.

“It’s an honor to join the punk royalty that is Anti-Flag on this intimate club tour. We’re looking forward to such energetic shows each night, hoping our blend of alternative and punk elements makes for an unexpected yet exciting opening act,” Alex exclaimed.

“Also, we are some stoked to spend more time in Canada! This will be our first show in Ottawa. We’ve only played in Canada a couple of times, but it’s always a fantastic show, let’s keep it going! See you all at the Club. We will be freezing,” Alex went on.

“It’s our first time in Ottawa, we know it’s going to be fun! Be ready for a good night! It’s rock and roll time baby,” Sydney concluded.

After their tour with Anti Flag they will be headlining a tour across the USA and are on the rise as one of rock’s biggest teen sensations.

Cyanuric Acid and its Usage