by Editorial Board
in News and Announcements
Reading Time: 3 mins read
43 2 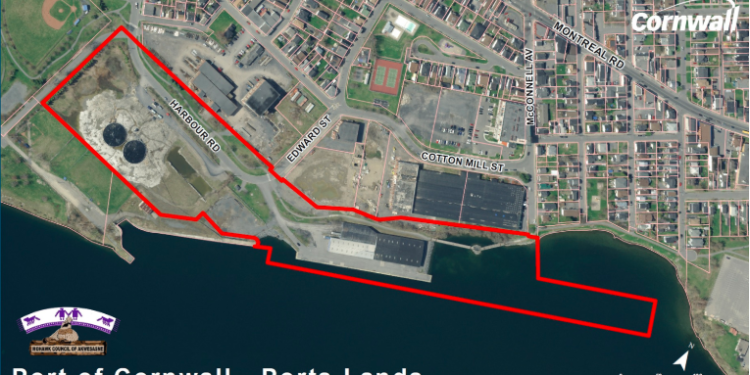 The Cornwall and the Counties Community Future Development Corporation (CFDC) has been engaged to act as the Manager for the Port Lands project.

The Port Lands is a 16 acre site along the St. Lawrence River that encompasses much of the Port of Cornwall.

In 2016, the Mohawk Council of Akwesasne and the Corporation of the City of Cornwall signed a historic agreement leading to the acquisition of the Port Lands previously owned and managed by Transport Canada. In transferring ownership, the federal government also provided an endowment to cover the costs of operation, maintenance, administrative services, and future development.  Today, the Port Lands are jointly owned by the Akwesasne Harbour Development Corporation and the Cornwall Harbour Development Corporation.

Selecting a manager is a step forward in identifying future uses for the lands, which currently consist of a commercial warehouse, wharf area and water lot. One of the few remaining active seaway ports, the harbour continues to welcome the Canadian Coast Guard, tall ships, commercial cargo ships and the Canadian Navy.

“The co-owners recognized the need to appoint an organization with the capacity to help move the Port Lands project forward and to lead extensive community consultations,” said Grand Chief Abram Benedict. “The CFDC is an organization with the experience and expertise with working with the City of Cornwall and Akwesasne, and a deep understanding of the relationship between the two communities.”

The CFDC’s non-profit advisory service, the Cross Border Partnership Program, was engaged in July 2020 to act as the manager on a renewable one-year term.

“We look forward to having the CFDC lay the groundwork for the project to grow,” said Mayor Bernadette Clement. “At this particular time in history, it is exciting to embark on this type of project where collaboration is at its core. For our two communities, we hope to grow our relationship, with mutual respect, and to produce something unique for future generations.”

In their role, the CBPP will provide administrative services to the co-owners in a four-phase approach which is expected to take approximately one year. Identified milestones include:

“We are very excited to be working on such a monumental project,” said Simon McLinden, Manager of the Cross Border Partnership Program. “It will be advanced with a unified vision that builds on the harmony between both communities.”

The CBPP is an advisory service of the CFDC, and was established in 2017 to assist in building stronger relationships between Akwesasne and the municipalities that surround it. The CBPP team leverages its networks and expertise to deliver meaningful engagement and consultation processes, build partnerships and joint ventures, and define strategies that lead to real, measurable, and beneficial results for all partners.

More information will be available when the Port Lands website is launched at www.theportlands.org.

With Love From Beyond 21