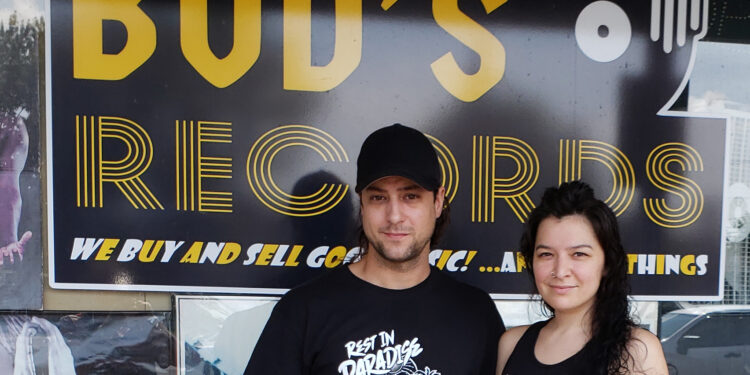 “A LOCAL’S IN THE LOUPE” feature by Mai-Liis Renaud

Last April we were so shocked when one of our Seeker contributors, Bud O’Byrne, suddenly and unexpectedly passed away at the young age of 40. Even though Bud had only been with us for a few months, he was the kind of guy who you felt that you’d known forever.

Each visit at the store was like visiting an old friend and the chats that we had on Facebook as he was putting his monthly column together were truly inspiring especially when the pandemic began and I remember Bud’s words – “I knew I had to evolve or dissolve”. So even though the store had to close as it wasn’t deemed an essential business, Bud pivoted to online auctions in which he was so natural and entertaining to watch.

Bud’s dream was owning a record store and he got to live his dream for only just over a year. I could definitely relate when he said “When you love what you do you never have to work a day in your life” because I have always been fortunate, like Bud, to love what I do every day whether it be with The Cornwall Seeker or my Graphic Design Business or for the past 8 years in the Wedding Business with Sheldon (DJ Shellshock).

and suddenly Bud was gone and his Bud’s records and Kool things remained closed.

Enter Bud’s friends, Jason Lavoie and his girlfriend, Emily Restoule who are moving to Cornwall from Ottawa to continue Bud’s Dream!

I was very fortunate to have caught up with Jason and even though he is presently busy with the move, his job in Ottawa where he has just been promoted to Supervisor and taking over Bud’s business, he still took some time out to answer a few questions for the Cornwall Seeker.

Question #1 – Can you tell us a bit about yourself and how you got to know Bud and when did you first meet him?

I am originally from Cornwall and met Bud back in 2010 on a Cornwall city bus, would you believe. I knew who Bud was so I introduced myself to him and we immediately had a connection when we started talking about music. He mentioned a newly discovered band Q65 and I mentioned another one, High Tide, and so our conversation began. What was really strange was the fact that we even lived in each others back yards and never knew it until that meeting. Bud and I remained good friends even when I moved to Ottawa to play music. I now work in Ottawa for Inflector Environmental Services where I recently got promoted to Supervisor.

Question #2 – What did you and Bud have in common?

We definitely had the love of music in common and we played in the band Doctor MoM, spending many nights jamming and elevating our minds together as we got to know each other and our friendship developed. Bud was such an easy person to be around and was always himself, a “what you see is what you get” kind of guy! We spent hours on YouTube listening to bands and we were both huge fans of Lydia Lunch, from the 70s. She was playing in Ottawa and we managed to get tickets to see her. Bud of course went one step further as he had an amazing sense of finding out things and discovered that she was missing an opening band and somehow he got our band, Doctor MoM, to open for her. So of course we got to not only go to the concert, but perform at it, meet Lydia and I actually got to drink wine from her glass!!! Speaking of the band, High Tide, Jason told me “a little while before Bud passed away, he told me that he had just bought the most expensive album that he had ever purchased and it just happened to be from the band High Tide. The sad part is that he never saw it as it arrived after he was gone”.

Question #3 – When Bud passed away so suddenly, how did you feel?

When Bud passed so suddenly I was heartbroken and devastated, so much so that I ended up taking a week off work as his passing had a huge effect on me. I have lost relatives but the passing of such a close friend and at such a young age was very hard to deal with and still is.

Question #4 – What made you decide to move to Cornwall to take over the store?

Since Bud’s passing there have been so many signs popping up that got me thinking, Bud’s Dream needs to live on. For example, wo days before Bud passed, he messaged me at 2 in the morning to ask if he could stop by to drop off some records for me to give to certain people. Covid had happened and Emily was not comfortable having people in the house but Bud’s visit for some reason didn’t worry her at all. We took the records and were happy to help him out. Then two days later he was gone. I felt that this was Bud’s way of trusting me with his business.

Bud has even appeared to me in my dreams and explained what he went through the day he died. I was sad but so happy to see him as I felt he is at peace and wants me to take over his dream.

So I sat down with my girlfriend Emily and we decided that we would approach Bud’s wife Angie to see what she had decided to do with his store.

Angie had planned on just selling Bud’s vast inventory but listened to our proposal and we met up in person a few weeks later. She said “I can’t think of anyone better” (to take over the store) – we were so happy to hear that.

I love living in Ottawa but have always thought of moving back to Cornwall as I was born and raised here and my parents would love me to come back but I always needed a special reason to return and this is it.

I know I can’t replace Bud but I can continue on with his journey. I wish he could be here on the journey with me but I know that being in his store I will feel his presence around me every day. He will be guiding Emily and I and I’m sure we will hear him telling us how to do things in only the way that Bud would. I was always scared that I would be intruding on Bud’s territory but I have to accept that he won’t be coming back (in person anyway) and the best thing I can do for my good friend is continue what he started. I know that there is still a need for vinyl and to see this place fade away would be a shame.

Side note from Mai-Liis: I know there is a need for Bud’s to reopen because while I was interviewing Jason people were coming over happy to see that the store was once again open, even though it isn’t quite yet!

Question #5 – Will you be making any changes to the store?

We plan on keeping things much the same but will be introducing Lazer Disc Movies and we have lots and lots of band t-shirts for sale. Bud was very much into the Online Auctions and Raffles so we will be continuing those for sure. Emily will be running the store during the week days and I will be here in the evenings and on weekends as I will still be working at my job in Ottawa and commuting back and forth.

Bonus Question: I know many avid record collecting fans are anxious to know when the store will officially be open again and what will be the opening hours?

The plan is to hopefully open mid September, initially with some “Soft Openings”. Hours to be determined as well.

and of course what is the contact info for the store?

The contact info for the store will remain as before:

Thank you for your time Jason and The Cornwall Seeker welcomes you and Emily back to Cornwall and we wish you both all the best and hope that you will be as happy sitting behind the counter operating Bud’s Records and Kool Things as Bud O’Byrne was “Living his Dream!”

I am a big believer in “Everything happens for a reason” and talking to Jason I know he believes the same so before we finish I must share a quick story about how Jason and Emily met.

Thanks to a cat – Jason had just moved to the Byward Market with his cat “Wildboy” who had previousy been used to going in and out of the house in a quiet neighbourhood. However when Jason moved, the new area was busy and for a year Jason put his cat out each night and he always came in the following morning until one night he went out and sadly didn’t return. After distributing “Lost Cat” flyers an old lady told him to go and check up the road in a garage. The garage happened to be Emily’s. Sadly Wildboy wasn’t there but instead Jason met Emily, they have been together for 3 years and I must say, these two look like they belong at Bud’s store surrounded by his blessing and positive energy – I was so happy to see the door to “Bud’s Records and Kool Things open once again on the day that I interviewed Jason at the store.

Julia and I wish you both all the best in your new venture!

The Cornwall Optimist Club is partnering with Paint Cornwall Gold to raise awareness of Childhood Cancer during September by hosting a non-dinner dinner.