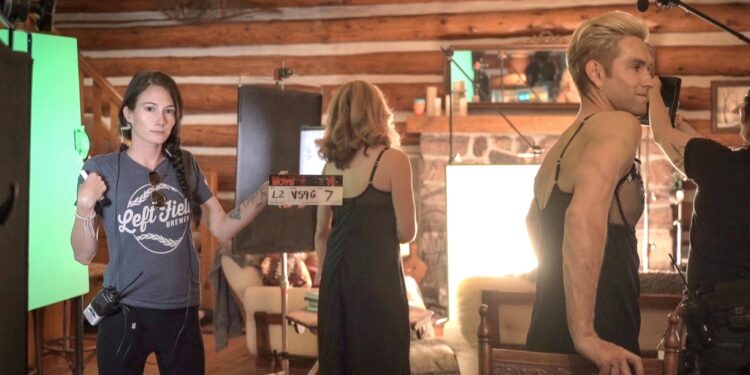 Toronto, Ontario – The Season 2 finale of the hit show The Boys aired last Friday on Amazon’s Prime Video. Based on a graphic novel, this gritty superhero series tells the story of vigilantes trying to thwart superpowered celebrities who frequently abuse their powers.

Also, The Boys has a connection to Cornwall, Ontario.

Kimberly Elderbroom, who lived in Cornwall for 19 of her 28 years, works in the film and television industry, and she was the Visual Effects Assistant on Season 2 of The Boys. She graduated high school at St. Joseph’s Secondary School and then completed a degree in Community and Justice Services at Sir Sandford Fleming College. After college, she worked promotion with the Cornwall River Kings hockey team. Next, she became an entrepreneur and founder of Hoppy Hour Yoga.

Her transition to the film and television industry was an unexpected and life changing.

“Getting into the film industry was very unexpected for me. It was never something I ever thought about doing. My stepdad is a Transport Captain in the industry in New York, and he happened to know a producer shooting in Toronto when I was looking for a job. I took a leap of faith, having no idea what to expect, and it turned out to be one of the best things that have happened to me,” Elderbroom recalled.

After five years of experience in the film and television industry, Kimberly Elderbroom was promoted to Visual Effects Assistant for Season 2 of The Boys.

“I worked as a Visual Effects Assistant on Season 2 of The Boys. It was great because in the five years I’ve been working in the industry, I worked in the production office, and although I gained a lot of knowledge about how film production works, I never got the on-set experience until The Boys. Not only did I get to experience the set, but I got to see a big part of how everything comes together. I attended the production meetings and the tech surveys where we would go to the locations before shooting to check out exactly how we would do it. I’m extremely grateful for my experience on The Boys,” Elderbroom explained.

Over the next six-months, Kimberly Elderbroom gained a wealth of experience and knowledge working on The Boys.

“I learned more in the six months I spent working on The Boys than I have in my five years in the industry. I learned a lot about different departments as well, including cameras and how to shoot certain plates for the visual effects to be effective. I learned a lot about prosthetics and how they make them look extremely realistic. I got to see some cool special effects and stunts on set as well,” Elderbroom said.

“I was the person who oversaw the VFX scanning. Anything that has visual effects, whether it be a prop, a prosthetic, a location, or a character, I would have to coordinate with different departments to have these things scanned by a scanning company, that way, we can recreate it on a computer to add what was needed. I also got to see my boss Stephan Fleet digitally create scenes on his computer so that the crew can understand how we need to shoot the plates. I think that the experience was even better than it could have been because I had such an incredible boss who was extremely patient and excited about teaching me new things,” Elderbroom went on.

In addition to working on The Boys, Kimberly Elderbroom is also a fan of the series. She reveals her favourite character on the show.

“My favourite character has to be Homelander, but only because Toni Starr plays the part so well. He is one of the nicest actors I have ever worked with, and he is honestly incredible to see in action. I also love that the show creator likes to put the actors out of their comfort zones with certain scenes. It makes for a great time for everyone on set,” Elderbroom noted.

Along with The Mandalorian on Disney+, and Stranger Things on Netflix, The Boys has quickly become one of the most popular shows available on streaming services. A recent article by Forbes magazine explores the colossal success of the series.

“The Forbes article was probably the most satisfying feeling in the world. We put a lot of time and work into creating that show. It was six months of twelve plus hour shifts, five and sometimes six days a week. We experienced many hiccups along the way, but the entire crew did an incredible job. My friends and family are extremely supportive and excited about it, as well. I recently had a friend thank me for bragging rights as he’s been able to tell people he knows someone who works on The Boys, which felt pretty empowering,” Elderbroom replied.

Over the years, Kimberly Elderbroom has done a lot of traveling and moving. If she could have one superpower, she knows what it would be.

“If I could have any superpower, I would choose teleportation. Being an adventurer, I am constantly saying goodbye to people that mean a lot to me. I wish I could have the people I love close by,” Elderbroom disclosed.

Now, Kimberly Elderbroom has moved to Vancouver, British Columbia, where she continues to work in the film and television industry.

“I am currently working in the film industry in Vancouver, but I am trying something new. Now I am working in set decoration on a Hallmark Christmas movie. I plan to stay in the industry, and my goal is to hopefully one day be a writer,” Elderbroom concluded.

Both seasons of The Boys is available to stream on Amazon’s Prime Video.

EOHU Reminds Residents to Be Cautious Around Bats