by The Seeker
in Between the Lines, News
Reading Time: 6 mins read 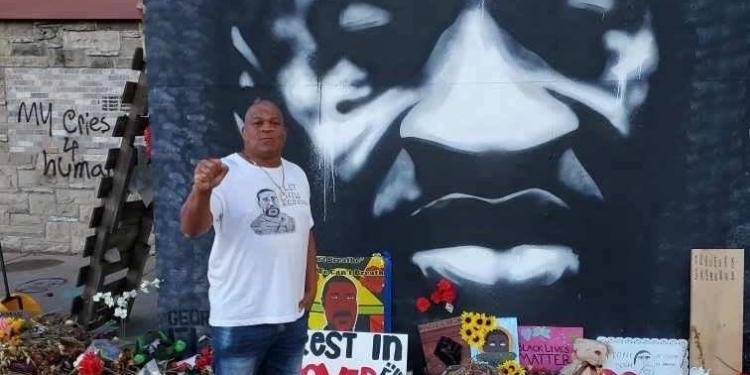 “Hi. I’m George Floyd’s uncle. I would love to chat with you.”

I got the message on a Sunday morning while scrolling through my social media feeds.

I laughed and closed the message box. It had to be a fake. The real Selwyn Jones was just featured in an interview in the December issue of GQ Magazine.

But what if?… I researched his Facebook profile. It seemed legit so I reopened the chat and typed: “Hi Selwyn, what can I do for you?”

He proceeded to ask me what the Seeker was. I explained what we do adding that we are very small; a tiny little fish in an ocean filled with sharks and whales, doing the best we can to raise awareness of racial injustice.

“Yes, but it’s changing the world,” he said. “Would you like to interview me?”

I teamed up with my good friend Louise to come up with questions that would help Mr. Jones tell his story. Here are the questions and his answers.

1. How was your nephew’s death different from others?  And why do you think it sparked off such a huge reaction world-wide?

To use the word different in my opinion is incorrect, however; murder of a loved one is always devastating to their families, friends, and supporters. I fell that the reason it sparked such a huge reaction world-wide is that people witness his murder, it is one thing to hear about something, however it is quite different when we witness such a heinous happening.

2. In your opinion, how does President Trump’s rhetoric affect the current racial climate in the United States?

President Trump’s rhetoric affects the current racial climate in a dangerous and destructive manner. Violence of any kind encouraged and/or carried out against humanity is shameful.

3. You say in your GQ interview that you have a lot to do. What are your plans? What would you like to tackle? What would help you accomplish your goals? How can others help?

(a.). My first mission is to assist in getting the George Floyd Justice in Policing Act passed.

(b.). We want to assist and support all families of any and all unjust actions against them, “color” is not a thing, humanitarian is our focus.

(c.). We would like to tackle all of the false, misleading and inaccurate information that is being taught to our children within these history books.

(d.). Others can help by realizing that no one is in charge of this place called earth and ALL people really should be treated equal. They can encourage others to support the passing of; George Floyd Justice in Policing Act.

Yes and no, the push is to bring the focus to the injustices that are being perpetrated by those that are hired to protect and to serve ALL of its citizens. It is the same because every statistic that is available to us unequivocally shows the disproportionate number of Black men/women die at the hands of the police. To add insult to injury they were unarmed.

5. What do you think contributes to racism?

I think that because individuals and groups of individuals choose to close their eyes, hearts and understanding to blatant hatred and disenfranchisement against people solely because of “skin-color,” and refuses to actually seek the truth and refuse to correct the lies that they have been told by their elders.

When you say we hear that the system is broken it concerns me, are you not aware of what is happening around you?

(a). As I stated in question five (5) we must debunk the lies and hateful rhetoric that is constantly being shared.

(b). Key ingredients to fix “it” is to first start with you, secondly do not empower those that support and push hatred, refuse to be “bullied” by those that knowingly and or unknowingly continue to push a lying narrative about people that do not “look” like them.

(c). The black community contribute to the fix is to understand that they do not need validation from “white-people”, that they have a responsibility to educate themselves and to dismiss the ideas that they must place themselves in a box to be “accepted,” to do their own research and find out who they are both individually and communally.

7.    In your opinion do inter-racial friendships play any part in different races learning to trust each other? (The idea behind this question is that it is hard to maintain strong prejudices when you get to know and understand people from other races and cultures)

Most definitely, inter-racial relationship is an extraordinarily strong catalyst in assisting individuals in seeing life from different points of view. These relationships beg to question the lies, distortions and myths that permeate our landscape as it relates to “race” and “race” relations.

8.    On a more personal level, what did George want to do with his life? What worked against him? What could have helped him?

George, like everyone dreamed of achieving that elusive American dream, he wanted to be a great father, brother, son, friend and supportive of people, one of his regularly uttered sayings in matters of positivity and forward progress is “um’ fo’ you.”

(b). As with most imperfect people he listened to individuals that did not have his best interest at heart, he made some unhealthy decisions, he like millions of others had difficulties from time to time correcting their flaws and move to a place of consistency as it relates to staying focused on achieving his goals in life.

(c). What worked against him was, again, as previously stated; often listening to the wrong voices, making unwise decisions, trusting untrustworthy people, and not seeing his full potential, in summation, he, like millions of  disenfranchised, stereo-typed individuals became a victim of a not so flattering environment that was created to subvert that much sought-after American dream.

9.    Are there any questions you would like to answer that we (or others) have not asked?

Yes. I would like to know why so many “Gods” fearing Americans feel that it is OK to murder someone for $19.99+.01, simply because they wore blue uniforms and a badge?

Why so many Americans are still trying to ignore the fact that George was murdered?

Why so many Americans attempt to justify a black man being murdered as a fault of his own?

Really guys, I have too many unanswered questions to list…

And we agree with Mr. Jones. There are many questions that remain unanswered but asking them is a crucial step to starting and maintaining a dialogue that will help us move forward united and strong.

To learn more about Selwyn Jones, or the cause #justiceforgeorge846
Follow Justice4george846 on Instagram
Find Selwyn Jones on Facebook
or visit https://846changetheworld.com
They are also available for diversity speaking engagement.