Do you know Cornwall had it’s own money? 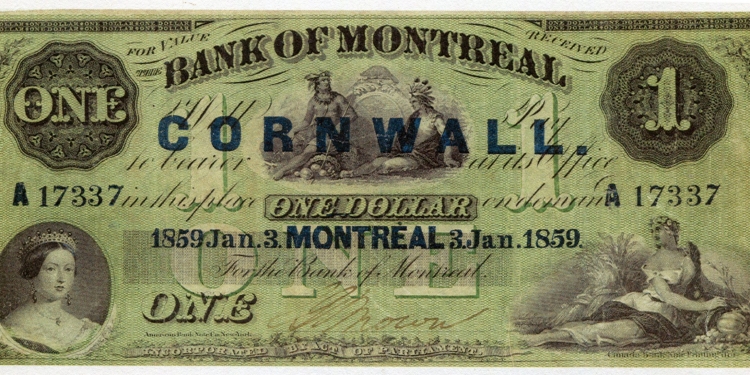 Canadians have used a vast array of materials to stand in for government issued currency , ranging from playing cards during the French era to bitcoin.

The recent withdrawal of one and two dollar bills as legal tender,  regulates them to the realm of collectible banknotes that includes 25 cent “shinplasters, $3, $4, $25 and $40 bills, all once in circulation.

Canada did not have its own currency until 1858, when the decimal system replaced English pounds and shillings.  The printing and minting of money, however, was not initially the preserve of the government,  and Canadian chartered banks were  printed their own banknotes until 1944.

As odd as it may sound today, the Bank of Canada was not chartered until 1934, and only started printing banknotes a year later.

Cornwall’s first bank, the Bank of Montreal opened its doors in Cornwall in 1857.   Two years later, it issued its own decimal currency, and allowed Cornwall along with other 16 s across Canada West to stamp the name of the community each branch was located in, on their dollar bills.

Printed on very thin paper, these green and black banknotes depict Queen Victoria in the right hand corner, “Ceres, ” the goddess of agriculture in the left corner and the bank’s crest in the middle.  The reverse shows St. George slaying the dragon.

The Bank of Montreal continued to print their own currency up until 1942.

As Cornwall’s first bank, the Bank of Montreal played a central role in development of Cornwall’s financial life, and moved frequently throughout the downtown core, until it constructed  it’s distinctive    Beaux-Arts style offices on Pitt Street  in 1911 ,which are now slated to become home to the Cornwall Arts Centre.  The Bank  expanded to Cornwall Township where it opened a branch on Montreal Road in 1925 and then moved into the Lefebvre Building seven years later.

The Bank was competition free in Cornwall until the Ontario Bank opened a branch here in 1882.  This Bank closed and was replaced by the Royal Bank in 1906 after its president was found embezzling funds.

As for the value of the Cornwall dollar bill, – let’s say if you had one and sold it –  you would be smiling all the way to the bank!

While banks no longer issued legal tender, merchants, service clubs and charities found a way around it by producing “trade tokens” or coupons.  Just think of Canadian Tire money, that at one time was accepted by many Cornwall businesses as valid tender.  The most notorious place in town to accept it was the Old Fort Tavern, which took Canadian Tire Money at par for a pint of beer.

Canadian Tire, however, was not alone in issuing coupons.  In 1992, the Cornwall Hotel, Motel and Restaurant Association, in cooperation with the Caisse Populaire and the Cornwall Gas Station Assoc., launched the “Cornwall Dollars” promotion, to stem the flow of people going to Massena for cheap gas by offering Cornwall dollars to buy gas.

In this scheme, merchant’s purchased ads in the Standard-Freeholder,” and received coupons valued at 50 cents and a dollar that they then gave to their clients to purchase gas at a Cornwall station for 30 cents a liter.

Unfortunately for the collector, these coupons did not appreciate in value, while the price of gas did.

Similarly, numerous organizations have issued special tokens from the 5 cent wooden token issued to commemorate the opening  of the Seaway to the “mining” of 30,000 silver coated $2  Cornwall Bicentennial  $2 trade tokens, by Cornwall’s credit unions, which to put it mildly failed to generate any interest.  Even today the 200 sterling tokens, which initially sold for $20, sell far below par.

Maybe it's time to throw in the towel.