Locals in the Loupe: A new Liver for Mom

by Neil Macmillan
in Locals in the Loupe, News and Announcements
Reading Time: 7 mins read
113 2 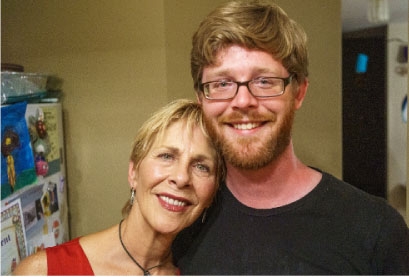 For lifetime Cornwall residents Rose and Tom Good, their four children (Jennifer, Tara, Jesse and Sarah) and other members of their extended family, Christmas 2020 was one they will never forget.

While much of the rest of the world was grappling with the coronavirus pandemic and doing their best to have as merry an occasion as possible, the Good clan was celebrating Christmas together but without matriarch Rose who had just come out of a coma and life-support in Cornwall Community Hospital’s Intensive care unit (ICU) where she had been hospitalized a few days earlier with acute liver failure.

In fact, as her family tells it, she had been almost certainly going to die because there was a “do not resuscitate” (DNR) order in her medical records. By sheer coincidence, one of the ICU nurses, Carol Hollingsworth, was a childhood friend of Rose’s and told the doctors to contact Tom.

Tom was then able to reverse the order. And the “miracles kept coming” – so much so that by February 12, Rose was back in Cornwall after a liver transplant at the University Health Network (UHN)’s Ajmera Transplant Centre in Toronto and feeling great thanks to a new liver donated by son Jesse.

However, for that happy outcome to come about quite a few other “stars” had to align…

Rose had a happy childhood in Cornwall as the youngest of six children of Leo and Alida Bissonnette, the operators of “Leo’s Market,” a well-known grocery store and pet shop at 414 Sixth Street East: “Every Wednesday my father would return home from Montreal with live stock for our pet shop. The highlight of the week. It was like Christmas every Wednesday. Life was good and we ended up with the best parents ever.” However, she, like many baby boomers in the 1960s or 1970s, contracted Hepatitis C virus (HCV) in her younger days without knowing how, where or when.

Fortunately, she lived without any negative effects of the infection until her early fifties when she was successfully treated with interferon in 2005.

In the meantime, she had met and married Tom, a successful local accountant and entrepreneur.

She then passed another 15 years in good health until mid-2020 when her blood tests began to show worsening numbers. By August she had developed such severe liver cirrhosis (permanent scarring) caused by HCV that there was no solution but a liver transplant.

This was where their only son and father-of-three Jesse (who is becoming increasingly well-known locally as a thoughtful and visionary columnist with the Cornwall Standard-Freeholder), unhesitatingly offered his own liver to his mother, fully aware that there was a small 0.2% – 0.5% risk he could die from the procedure. Jesse also got the okay from his wife, Melanie Ayotte.

Rose’s daughter, Sarah also obtained at least five positive responses from an appeal for live donors via Facebook, while Staecy Lauzon, one of Rose’s Kinette Cornwall colleagues, offered to donate part of her liver too.

In other words, Rose had six back-up living liver donors, but the problem was that she probably could not survive long enough to get one from any of them.

The next step for Rose’s potential transplant was to establish that Jesse would be a suitable donor – a four-month-long process that ended on December 23 when it was finally determined that he was. Along the way, Jesse was learning as much as he could about what would be involved, even posting the video of a 46-minute UHN Transplant Program webinar – Living Liver Donation & Transplantation – on his Facebook page.

In the meantime, Rose, who had been put on the Toronto transplant centre’s waiting list for a new liver (but well down the list at around #300 and then taken off after her hospitalization), immediately jumped up the line because she had a separately vetted living donor.

However, Rose still had to get a firm date for the operation in Toronto. Fortunately, this was helpfully arranged for January 11 thanks to Cornwall Community Hospital’s Medical Director of Critical Care Dr. Paul Westergaard, who advocated on her behalf with the Transplant Centre and found a receptive ear with one of its leading transplant hepatologists, Dr. Nazia Selzner.

With the last star thus aligned, Rose was whisked off to Toronto by helicopter, and Jesse and his Dad followed along by car. The transplant was then performed on January 11, a day that all the Goods’ extended family is going to celebrate as a special anniversary from now on!

Here are a few questions that we asked the Goods in The Seeker’s 5-question interview style.

Question 1 to Rose: What do you most appreciate about your amazing good fortune?

It’s amazing and a true miracle. I feel very blessed to have been given this gift of life. The reality of starting over with this new liver donated by our son Jesse allowed our whole family to move forward with glee. Jesse was very insistent that he give me back my life because it was me that gave him his.

Question 2 to Jesse: You seem to have made the right decision to risk your own life to save your mother’s – how do you feel now that the operation seems to have gone so well?

Physically, I feel great – nearly back to normal. Emotionally, I feel extremely grateful that I could give my mother the chance at living a healthy and happy life. Not everyone is so lucky – this is a gift that goes both ways.

Question 3 to Tom: In this whole saga, did you have any difficult decisions to make and are there any comments you would like to share?

There actually wasn’t much I personally had to decide except the one noted re DNR. At the same time, I would really like to compliment and acknowledge the incredible healthcare workers here at CCH as well as at the UHN’s transplant centre at Toronto General Hospital. With their care, Rose was able to be the miraculous recipient of life. Our family are over the moon with joy as a result of all those angels that helped her along this incredible journey. We are extremely grateful.

Question 4 to Rose: How has this near-death experience changed you and do you have any special message you would like to share with the rest of us?

I am so grateful for the beautiful liver that allows me to share my life with family and friends. For all of the people who are waiting to receive a deceased person’s liver, the possibility of live donors is exciting. If I could influence anything in my life, it would be one additional donor of a portion of their liver to save someone’s life.

Question 5 to Tom: Now that Rose should be fully recovered in a few weeks, do you have any new plans for the rest of your lives together?

As for future plans, we are kind of going to just let it happen. We have travelled a lot… we could do more. Our lives now are quite a bit more about our kids and grandkids. For now they are mostly here so here is probably where you will find us.

Bonus question to Jesse: You have the last word – what would you like to say?

I’m very thankful to everyone that has supported our family through this long and trying period. Our neighbours have been so kind; our doctors were so helpful; the selfless people who volunteered to be donors are inspiring; and my wife, kids, sisters and other family members made this possible. I’d also like to say that there are many more people like my mom that need live organ transplants to survive. Live organ transplants save a sick person’s life. If our story has inspired you, you may be able to save someone’s life through an anonymous liver or kidney donation. Please contact the UHN’s Ajmera Transplant Centre inToronto if you think you might like to be a live organ donor. And also make sure to register as a posthumous organ donor, if you haven’t already, and explain your wishes to your family. The need for organs is greater than the supply.

What a wonderful, positive and heartwarming story! Definitely the kind that the Seeker loves to hear and write about. If you have any stories for us please email: info@theseeker.ca OR call Mai-Liis at 613-935-3763 ext. 102. We would love to hear from you!