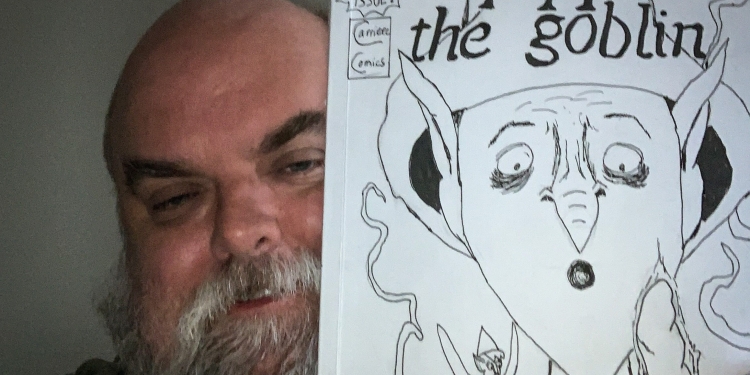 Cornwall, Ontario – Neil Carriere, who is a teacher at St Joseph’s Secondary School wears many hats. He has been an actor, stand up comic, author, and has become involved in the art community with his drawings and paintings. Also, he has been a community volunteer at CAPE. Now, he has added a new item to his resume by fulfilling a lifelong dream of publishing his first comic book, Pip the Goblin.

“I’ve loved comics since I was old enough to read,” says Carriere. “Every week I would beg my parents so I could buy the latest issue of whatever caught my eye.  I’ve always wanted to write for comics but never thought I’d end up drawing one.”

Carriere explains he only got serious about doing art recently when he joined some classes at Cailuan Art Gallery.

“The art community in Cornwall is fantastic,” he said.  “They welcomed me, and I’ve been creating ever since.”

Eager to try new art challenges Carriere would seek out inspiration at events that would encourage him to do a drawing a day.

“That’s where Pip was born.”

Pip was a character that Carriere recalls came to him in a burst of inspiration and he has been drawing him ever since.

“If you follow me on Facebook or Instagram, you’ll see Pip all the time.  After a while I had accumulated enough drawings to make a comic,” Carriere reminisces.

“Finally sitting down and crafting a comic turned out to be more work than I thought; but now that I’ve done it once – look out, because Pip’s adventures will continue.”

Carriere quickly sold out his first limited run printing and had to order more.

Comic book fans can order directly from the artist, or fans can pick up copies at Fantasy Realm soon.

Pip’s drawings can be found on Neil Carriere’s Instagram page, or a copy can be ordered by email at [email protected] For more information on Pip The Goblin, join the Facebook group.